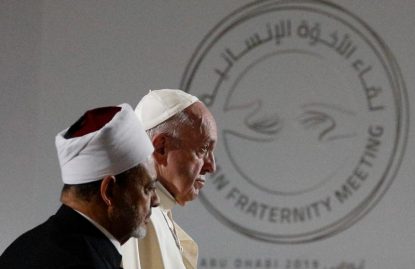 Pope Francis and Sheik Ahmad el-Tayeb, grand imam of Egypt’s al-Azhar mosque and university, are seen in Abu Dhabi, United Arab Emirates, Feb. 4, 2019. Pope Francis welcomed Abu Dhabi’s formation of an international committee to implement the “Document for Human Fraternity for World Peace and Living Together,” which he and Sheik el-Tayeb signed in the country in February. (CNS photo/Paul Haring)

VATICAN CITY (CNS) — At a time when conflict and division dominate the world’s headlines, people need to know there are a growing number of important initiatives to promote interreligious dialogue and understanding, Pope Francis said.

The pope welcomed the Abu Dhabi government’s formation of an international committee to implement the document on “human fraternity,” which he and Sheik Ahmad el-Tayeb, grand imam of Egypt’s al-Azhar mosque and university, signed in Abu Dhabi in February.

“Although sadly evil, hatred and division often make news,” the pope said, “there is a hidden sea of goodness that is growing and leads us to hope in dialogue, reciprocal knowledge and the possibility of building, together with the followers of other religions and all men and women of goodwill, a world of fraternity and peace.”

Spanish Bishop Miguel Angel Ayuso Guixot, president of the Pontifical Council for Interreligious Dialogue, was named a member of the committee.

In an interview with Vatican News, Bishop Ayuso said the document is an appeal to build a “civilization of love,” and should not lead to a fear that Catholics will stop believing that the fullness of salvation lies in Christ.

“I think fear is the number one enemy of interreligious dialogue,” he said. “The Catholic Church remembers the value of its own identity, the courage of otherness and the sincerity of intentions” of those who engage in dialogue.

“It is not about creating a ‘melting pot’ in which all religions are considered equal,” he said, “but that all believers — those who seek God and all people of good will without religious affiliation — are equal in dignity.”

PREVIOUS: St. Teresa of Kolkata’s birthday not forgotten by Missionaries of Charity

NEXT: Retired pope responds to criticism of his reflection on abuse crisis