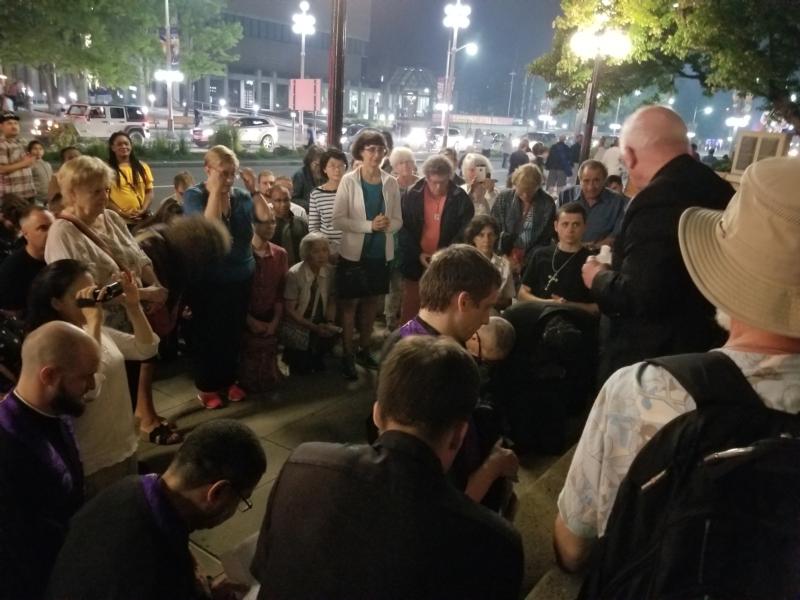 Archbishop Terrence Prendergast of Ottawa, Ontario, right, holds a bottle of holy water while blessing a crowd of people during a prayer vigil outside The Koven nightclub in Ottawa, prior to a satanic black mass on Aug. 17, 2019. About 200 people held the prayer vigil as a satanic black mass occurred Aug. 17 at a heavy metal club in the Canadian capital. (CNS photo/John Pacheco, The Catholic Register)

OTTAWA, Ontario (CNS) — About 200 people, most clutching a rosary, held a prayer vigil as a satanic black mass occurred Aug. 17 at a heavy metal club in the Canadian capital.

Other Catholics attended adoration at Notre-Dame Cathedral a few blocks away or circled the block where the widely publicized event sponsored by the Satanic Temple of Ottawa took place. The day began with Ottawa Archbishop Terrence Prendergast celebrating a Mass of reparation at Annunciation of the Lord Church in suburban Ottawa.

“Though Christ has won the definitive battle against sin and evil, we are still involved in mopping up operations,” Archbishop Prendergast said. “There are still skirmishes and outbreaks of violence against Christ’s bride, the church.”

He offered prayers for the people attending the event and led those gathered for the Mass in making reparation “for the blasphemies uttered against God in our midst.”

The archbishop was flanked by Auxiliary Bishop Christian Riesbeck and several priests from the Companions of the Cross, all wearing purple, penitential robes.

Nicholas Marc, national coordinator for the Satanic Temple in Canada, told Global News he believed the gathering at The Koven nightclub was “the first organized public black mass in Canadian history.”

“Essentially, it involves using traditional symbols and inverting them to create a ritual that is meant to be the opposite of traditional Mass,” Marc said.

Archbishop Prendergast called it hateful to mock the Mass.

“It will say loudly that the central belief of Christians should be shown respect, as we would expect respect to be shown to the Jewish Torah, to the Muslim Koran and to the sacred objects of other faiths,” he said in advance of the event.

“Such a ritual sends the wrong message that we’re tolerant of what is in effect hate speech, which this has become by the widespread publicity being given to it.”

Archbishop Prendergast said he had been counselled to say nothing about the black mass because the organizers are “merely seeking publicity.”

“But I need to be concerned for my own people, who would be shocked to think this matter was publicized and we did nothing about it.”

About 50 people paid to participate in the event at the nightclub. The satanic ritual included an “unbaptism” ceremony. Archbishop Prendergast said the organizers, when asked, said they were not using a consecrated host at the ritual.

Several Ottawa parishes also held Masses and adoration in reparation for the event.

Father John Pacheco, who helped rally people to pray outside the nightclub, reported on the Catholic blog socon.ca that he approached the prayer vigil with trepidation and skepticism that the black mass might prove to be a “nothing burger.” He arrived to find a “a loud and mildly obnoxious” fundamentalist preacher denouncing devil worshippers.

“I must admit that my heart sank a bit,” Father Pacheco said. “I did not want this event to be taken over completely by fundamentalists and portrayed by the media in that way, just because they are the loudest kid on the block who opposed the event.

“I had envisioned this to be something quite classy and beautiful,” he said. “This was, after all, principally a Catholic fight against a black mass. Fundamentalist anti-Catholics do not believe in the Mass and many of the other sacraments. Even Hollywood knows that when the devil comes out, you don’t call a preacher. You call a Catholic exorcist.”

While most of the Catholics stayed across the street or circled the block, Father Pacheco said he prayed the rosary in front of the nightclub and eventually spoke with club owner Mehdi Galedhar and Marc.

Galedhar told him he viewed the event as an exercise in religious freedom, something that had been missing in his home country of Iran.

Marc told Father Pacheco he had grown up in a traditional Latin Mass household, but had been “abused,” though he did not describe the nature of the abuse.

Michael Dopp, an Ottawa father and evangelist, said the event turned into “an occasion of grace.”

“The sense in my soul and in those I spoke with was one of peace,” Dopp wrote in a letter. “It was as if grace simply overwhelmed the evil.”