Schools try to curb migration from Guatemala with little success 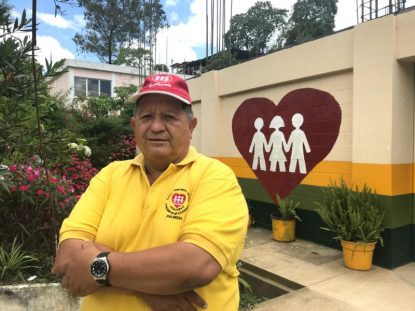 Carlos Rene Osorio, principal of the Jesuit-run Faith and Joy education center in Palencia, Guatemala, poses outside the school Aug. 14, 2019. The school is challenged to keep students enrolled because many parents choose to migrate with their children. (CNS photo/David Agren)

PALENCIA, Guatemala (CNS) — Carlos Rene Osorio pitches parents in rural Guatemala on the value of keeping their kids in school, rather than migrating with them to the United States.

The parents listen politely, he said, but don’t put much value on what he says about their children pursuing an education and becoming professionals in this impoverished Central American country.

“They have this chip and if it’s time to go, they pick up and leave,” said Osorio, director of the Jesuit-run Fe y Alegria (Faith and Joy) schools in Palencia, 20 miles east of Guatemala City.

“Education isn’t their priority. Their priority is earning money,” he explained. “Migrating to the United States represents a life change: having money, having a nice house and having a car, even though they’re not educated.”

Migrants have abandoned rural Guatemala in droves in recent years and currently comprise the largest nationality of detainees on the U.S. southern border, according to U.S. Customs and Border Protection statistics.

Those migrants are increasingly taking children on the long journey north through Mexico. Migrants already established in the U.S. also send for their children — who travel northward with coyotes (human smugglers) — in an effort to reunite separated families.

The trend toward migrating with children has emptied schools in some parts of Guatemala. Osorio said his Faith and Joy school for middle- and high-school ages has lost 12 students so far this year — about 7.5% of the pupils.

Other schools in the region of corn, bean and gourd farms report even larger outflows as parents come to request their children’s permanent records prior to hitting the road.

One education official in Palencia said the outflow of children started as word spread widely that migrants taking minors would receive entry into the United States. It’s a belief repeated often in rural Guatemala and encouraged by coyotes. The smugglers, according to press reports, charge less if someone takes a child because the adult and the minor (or sometimes just the minor) is brought to the U.S. border with the expectation of surrendering to migration officials and later applying for asylum.

“People used to be fearful of going because they were scared they would not be able to enter the United States,” said Ismailia Alvizuris, a school superintendent in Palencia. “Then they saw that children would work for them as passports.”

Some 177,000 family units from Guatemala have been detained during the first 10 months of the 2019 fiscal year, which started Oct. 1, 2018, according to U.S. Customs and Border Protection. The amount is more than triple the number of apprehensions the previous year.

The outflow comes as President Donald Trump pushes Guatemala to become a safe third country. Such an arrangement would require people wanting to seek asylum in the U.S. to return to Guatemala and request asylum there if they passed through on the way north.

Analysts said Guatemala, where nearly 60% of the population lives in poverty and roughly half of children younger than 5 are malnourished, is in no condition to receive so many migrants — for the same reason many Guatemalans abandon the country.

“Our state doesn’t offer health or education so that makes people, including women and families, say: ‘I’m taking children because at least there they’re going to study or do something,'” said Ursula Roldan, an investigator at the Jesuit-run Rafael Landivar University. She described emigration as “multifactorial” with the causes ranging from climate change to poor prices for agricultural products such as coffee to family reunification.

Primary school enrollment in Guatemala has slipped over the last decade from 96% of children to 87%, said Jesuit Father Miquel Cortes, national Faith and Joy director. Faith and Joy schools have expanded mostly at the secondary level, which have an enrollment rate of just 45%, he added.

Quality also isn’t the best, Father Cortes said, with most of the public education budget going to teachers’ salaries.

In Palencia, Ortiz, the school principal, cites another factor for students leaving: drought. The region normally experiences a 40-day stretch of dry weather each summer. But those scorching temperatures have lasted longer than normal in recent years, he says.

Ortiz introduced a visiting reporter to a pair of brothers, ages 14 and 16, whose father paid a coyote to take him to the U.S. last year after suffering consecutive crop failures. The father works as a gardener in New York state and sends home remittances, the boys said.

The family had heard the harsh anti-migrant discourse coming from the U.S. “But he had no choice,” one of the boys said. “He had to risk it.”

Migration from Palencia used to be short-term with locals staying long enough to earn money for building a home and getting ahead in life. But school officials said families are increasingly staying in the U.S. and, as the prospects of returning diminish, send for their children to be reunited.

Many households are propped up with remittances from family in the U.S. Funds are expected to total more than $10 billion in Guatemala this year. But Ortiz sees a downside as remittances produce “idle people, who don’t work and don’t study because they have family there sending dollars.”

In some cases, he said, the funds stop and “children grow up practically alone here.”

Another of Ortiz’s students, an 18-year-old woman with plans to pursue university studies, was left with friends of her family after her father left for the U.S. eight years ago and her mother and younger brother followed shortly thereafter. Remittances to support her have slowed and contact with her parents is now sporadic.

“It seems like when parents leave, instead of improving things, it destroys the family,” she said. “It destroys their own homes because they’re losing communication.”

NEXT: Catholic pilgrims walking to Marian shrine attacked in India