With Venezuela in a free fall, its bishops call out the government 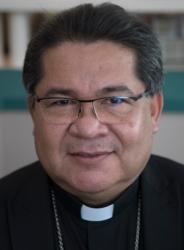 The capital city of Caracas, where he has worked for the last two decades, has in recent years seen tear gas attacks, physical assaults on citizens by government forces, and hungry and malnourished crowds asking for help in streets that once boasted some of the most well-off masses in all of Latin America.

Several members of the bishop’s family studying abroad have chosen not to return because of the uncertainty of securing a job, much less food or medicine in the country that each day approaches financial and political collapse. Even some of his family members who weren’t living abroad have left, he said.

Millions of Venezuelans, like those in Bishop Fernandez’s family, have left.

“The situation in Venezuela has become increasingly serious, more critical,” said Bishop Fernandez, secretary-general of the Venezuelan Episcopal Conference, who spoke with Catholic News Service July 18 in Washington, where he was attending a conference.

That’s why, he explained to CNS, he and his brother bishops in the troubled South American nation recently called out the government in a letter written by the bishops’ conference after the group’s July 2019 gathering.

One long chunk at the beginning of the declaration lists a cascade of problems outlined in a United Nations’ report on the state of the nation: grave violations of human rights against citizens, including lack of access to food, health care, medicine; a trampling of democracy; a weakening of public institutions; and physical and sometimes fatal harm against citizens who voice opposition to the current government.

The country’s bishops, along with the rest of Catholic Church and the citizenry of Venezuela, have lived in the unfolding chaos that has driven at least 3 million out of the country, according to figures from the U.N. refugee agency, which released in June current statistics and projections of a larger exodus to come later this year.

By the end of 2019, the number of Venezuelans leaving the country may surpass more than 4 million, said the agency, meaning the once-wealthy nation will have lost about 10 percent of its population in the last four years. The only country with a larger displacement of people because of a humanitarian crisis is Syria.

Bishop Fernandez said the country “has deteriorated in such a steep manner” that’s it hard to know where to begin talking about the problems Venezuela faces.

Venezuela, once the richest country in South America because of its oil supply, has seen its fortunes take a turn in the last decade because of mismanagement of resources and a drop in the value of oil, which plunged even more after the political crisis scared off investors.

Many Venezuelan parents have left the country to work in nearby Colombia, Peru or Brazil, which have absorbed the bulk of the fleeing masses. Efforts were made in July by sympathetic Democrats in the U.S. Congress to pass a bill that would have granted Temporary Protection Status, or TPS, to Venezuelans living in the U.S. but the measure was blocked in late July. TPS grants a work permit and a reprieve from deportation to certain people whose countries have experienced natural disasters, armed conflicts or exceptional situations, to remain temporarily in the United States.

The Trump administration, which has made no secret of its desire to end the TPS program for countries such as El Salvador and Haiti, however, is said to be considering some form of immigration protection for the approximately 200,000 Venezuelans in the U.S. That’s because the White House is sympathetic to the Venezuelans’ plight and wants to see the end of the country’s current socialist government led by Nicolas Maduro — a move backed by the Venezuelan bishops.

Amid the political chaos, the country is not equipped to handle the scarcity that exists in the country, said Bishop Fernandez. The dwindling supply of food and medicine has now led to rampant disease and malnutrition, he added, and that’s why the bishops felt compelled to address the deterioration in their letter and called for a new political start.

“Venezuela cries out for a change of course, a return to the Constitution. That change requires the departure of those who exercise power illegitimately and the election in the shortest possible time of a new president of the Republic,” the bishops’ letter says.

The church worries, Bishop Fernandez said, about how the crisis has affected the poor, their health and access to food, how it has led to the disintegration of the family and curtailed personal freedoms for those who remain in the country but disagree with its rulers.

There isn’t much opposition from those in the pews about what the bishops have said to the government, he said. The church has to be a protagonist and demand the public good, “the good of our people,” he said. The work of organizations such as Caritas, the humanitarian arm of the Catholic Church, helps Venezuelans understand “that the church walks with them” even in difficulty, Bishop Fernandez said.

Venezuelans see a church that calls for their rights to be respected, one that walks with the weakest, the most vulnerable, one that won’t be silenced about the mistreatment of its citizens, he said.  And behind those words, they have a powerful supporter: the pope.

“The pope is very close to us,” said Bishop Fernandez. “He keeps up with the situation.”

He added that during a regularly required bishops’ visit with the pope in 2018, the pontiff told the group, “that we are the voice of the pope” in the country.

The Vatican has been involved diplomatically, he said, urging parties involved in the conflict in Venezuela to find a peaceful solution out of the crisis that is quickly spreading outside of the region and is now becoming a “geopolitical issue.”

The business news agency Bloomberg reported Aug. 7 that a Chinese contractor has agreed to help with the country’s oil refining network and ease fuel shortages in the country. China joined Russia in criticizing U.S. involvement, saying sanctions made the situation worse for Venezuela and its people.

China supports the Maduro government and that support can help keep it in power — meaning the crisis won’t end soon.

No matter what happens, the bishops won’t stop calling for a way out of the misery.

“Some have accused us of being political and have told us to cast aside our cassocks and form yet another political party, ” Bishop Fernandez said. “But we’re not being political. We’re looking for the well-being of our people. … We want to shine the light on the problems taking place in the country … on bad policies that have been implemented that are making people suffer.”

“This is a complex situation, a dramatic situation that we’re living and we’re responsible for saying that if something isn’t working, changes have to be made,” he added. “What isn’t working has to be improved and those are our concerns.”