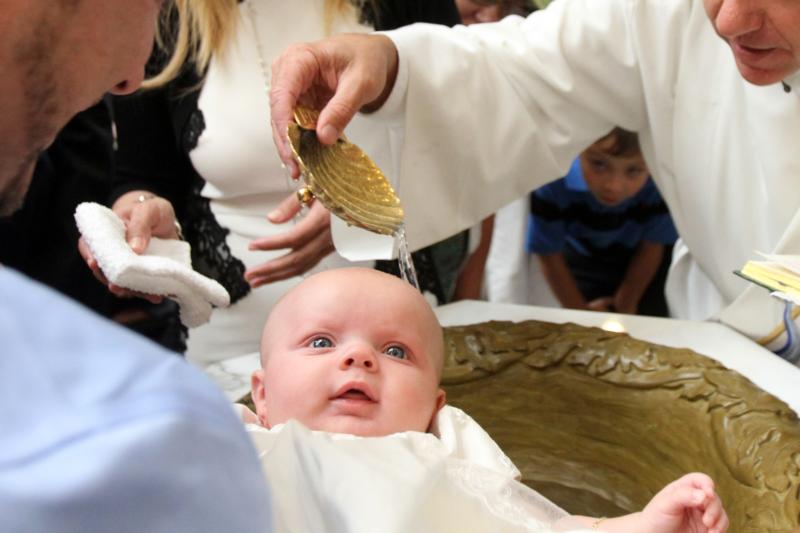 A baby is seen during her baptism. France’s Catholic bishops criticized legislation to allow medically assisted procreation for single mothers and lesbian couples and urged citizens to help block its enactment. (CNS photo/Gregory A. Shemitz)

“We hear and understand the suffering of those who cannot have children from their union with a person of the opposite sex and of homosexual women who aspire to have children,” said Archbishop Eric de Moulins-Beaufort of Reims, president of the bishops’ conference. “But our societies are making a collective mistake when they pretend to resolve sufferings with medical and juridical techniques, and when they turn medicine intended for caring and curing into a vehicle for demands and frustrations.”

He said the French bishops repeatedly had outlined what was at stake in the projected measures, but added that the church’s “attitude of listening and dialogue” had been ignored by legislators in “their fascination with the promises of medical and juridical techniques.”

Archbishop de Moulins-Beaufort warned the measures risked “pointing the way to a liberal eugenics,” and said the “beauty of parental love for children” could not justify “surrendering procreation to medical manipulation” and “family relationships to DIY.”

Archbishop Eric Aumonier of Versailles urged citizens to consider the “grave transgressions” embodied in the legislation, which would “place the desire of adults before the welfare of children.”

“The child risks no longer being received as a gift, but as a right,” he said in a Sept. 19 statement.

He said the Catholic Church welcomed “every conceived life” and “every family as it is,” but called on Catholics to help “awaken consciences,” by “explaining to friends, colleagues and relatives what is at stake.”

Changes to the law, promised by President Emmanuel Macron before his May 2017 election, are opposed by some legislators, who fear they will spur legalization of surrogacy and further deregulation of embryo research.

Around 80,000 children are born annually in France through member-assisted procreation, which is available to single mothers in 26 of the Council of Europe’s 47 member-countries, and to lesbian couples in 14.

In a September survey by the French Institute for Public Opinion, two-thirds of citizens backed the proposed measures.