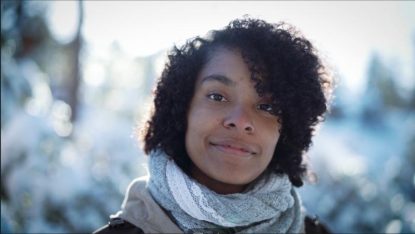 Felician Sister Desire Anne-Marie Findlay appears in a still from the fifth episode of the documentary “Beyond the Habit.”  (CNS photo/Jeremy Zipple, courtesy America Media)

WASHINGTON (CNS) — The Center for Applied Research in the Apostolate, based at Jesuit-run Georgetown University, has partnered with another Jesuit ministry, America Media, to produce a series of five videos on vocations to religious life posted to America Media’s YouTube channel.

The videos, bearing the title “Beyond the Habit,” were posted, one each day, starting Sept. 23.

The late journalist Cokie Roberts, a Catholic who had a longtime presence on ABC and National Public Radio, narrated the first of the videos, “300 Years of Sister History in Five Minutes.”

“We were very blessed to have Cokie Roberts very quickly narrate that first one this summer,” said Jesuit Father Tom Gaunt, CARA’s executive director. “It was one of her last projects.” Roberts died at age 75 Sept. 17 — six days before her video’s release — of complications from breast cancer. The video, at its conclusion, is dedicated to Roberts “in loving memory.”

The video series came about as an extension of CARA’s long-standing work studying issues and trends in vocations. “We put it all together in a book, ‘Pathways to Religious Life,’ published in August last year by Oxford University Press,” Father Gaunt told Catholic News Service in a Sept. 25 phone interview.

But for those who don’t read books of that nature, the question was how to reach out to that audience.

“In a discussion with the Conrad Hilton Foundation, they had asked us, were there innovative things we wanted to try? We replied that we wanted to gather a lot of the information we had gathered about sisters, and put it into a video,” Father Gaunt said. “They were game with this effort, and we made a partnership with America Media to produce a set of five.”

CARA and America had worked together in the past — about five or six years ago, according to Father Gaunt — in producing an animated short feature based on CARA’s research on what the priest called “the typical American Catholic.” He added, “I was surprised at how broadly it was downloaded. The videos end up being a very helpful tool for religious ed programs, parish programs … a variety of venues.”

It turns out that, one month after “Pathways to Religious Life” was published, CARA made the agreement with America Media to make the videos.

One reason it took a full year to have them ready for viewing is that the maker of the videos, Jesuit Father Jeremy Zipple, had been on assignment in Belize. However, the groundwork was laid for Father Zipple to record footage when he returned to the United States in April, Father Gaunt said.

One of the other videos in the series features two Peruvian nuns, both members of the Servants of the Plan of God, and their work in southern Arizona. One accompanies asylum-seekers at the U.S.-Mexico border. The other is a campus minister at Arizona State University — and a pole-vaulter, a sport she continues.

Since research remains CARA’s strong suit, CARA left it to America to determine when and how the five videos would be released, Father Gaunt added. “We deferred to America Media in what would be the best and most effective outlet. I mean, that’s their specialty, not ours,” he said.

Much the same is true regarding yardsticks measuring the videos’ success. “We’ve not done it before, so it’s all new to us,” he told CNS. “It will be linked to other groupings that will be promoting vocations to religious life. It’s available for anyone and everyone to download and utilize.”

Editor’s Note: The videos can be seen here and they can be downloaded and shared.

PREVIOUS: Cardinal Levada took U.S. experience with him to the Vatican

NEXT: ‘Christ Our Hope: In Every Season of Life’ is Respect Life Month theme