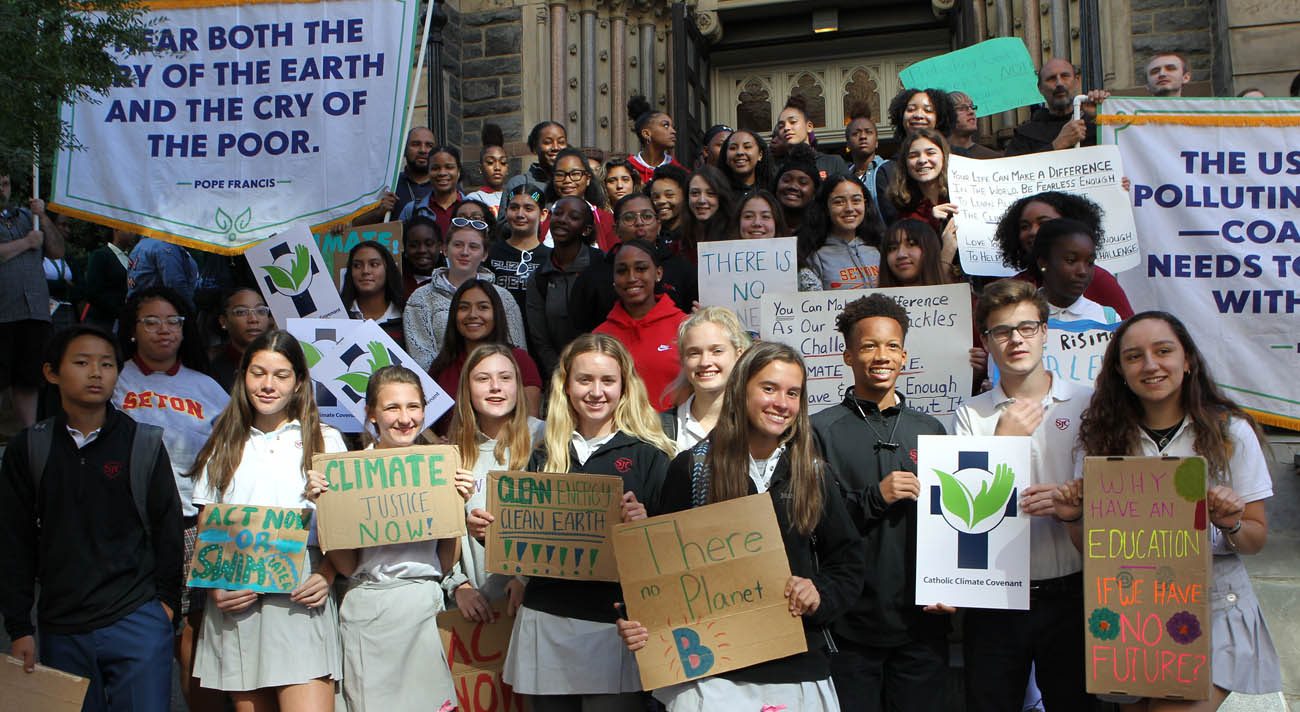 Students from Catholic schools in the Washington Archdiocese stand outside St. Patrick's Church in Washington Sept. 20, 2019, where about 200 of them had gathered to pray prior to the climate change rally in front of the U.S. Capitol. (CNS photo/Carol Zimmermann)

WASHINGTON (CNS) — A few hundred Catholic school students from the Washington Archdiocese took their cue, literally, from Pope Francis when they joined thousands of mostly young people at the climate change march in Washington Sept. 20 behind the banner with his words: “Hear both the cry of the earth and the cry of the poor.”

The phrase is from the pope’s 2015 ecology encyclical, “Laudato Si’.”

He led a group of 48 students from his school, joined by dozens more from eight Catholic high schools and one elementary school in the Washington area taking part in the midday march and rally urging government and business leaders, and everyone, really, to take action to stop climate change.

The march, like dozens more that occurred around the country and the world Sept. 20, took place three days before world leaders planned to gather at the United Nations for a climate summit.

The participants filled the street making their way to the U.S. Capitol, under a blue sky on a warm, sunny day and delivered a message not only by their sheer number but with signs they held aloft, mostly on cardboard or white poster board with messages written in marker about saving the earth, the need to reuse and recycle and do away with fossil fuels.

The marchers also chanted things like “Save our Earth!” or “Hey, hey, ho, ho, climate change has got to go” and “This is what democracy looks like!”

At St. Patrick’s Church in Washington, several blocks from where the march began, the Catholic school students were more subdued in the dark church than the group at large that they would join, but they were just as passionate about doing something to help the earth and also saw the faith connection to this effort.

They took part in a “Season of Creation” prayer service coordinated by Catholic Charities of the Archdiocese of Washington that involved prayers, Scripture passages and a prayer of St. Francis. The students pledged to work to help the environment and oil was placed on their hands as a sign of this commitment.

The group heard Greta Thunberg’s address to the U.N., where she said: “Change is coming whether you like it or not.” Thunberg, the Swedish teen climate activist started a started a school strike for the climate outside the Swedish Parliament last year that has since spread worldwide. Earlier this year, she met Pope Francis at a weekly general audience.

Morgann Clark, a senior from Elizabeth Seton School who addressed the group right after they listened to Thunberg, admitted it was “hard to follow Greta” and encouraged fellow students to see climate change as not only harmful to the environment but as having a socioeconomic impact.

“May God give us the power and strength to help us save this planet,” she said, followed by cheers.

Ben Campion, a senior at Gonzaga College High School in Washington, said he only became more involved in efforts to help the environment just recently after realizing so many young people were leading the way in this effort.

He urged fellow students to realize they are “part of something bigger than ourselves” and pleaded with them to start their own rallies or prayer services and since many are about to vote for the first time, to vote, and get friends to vote, on climate change initiatives.

Florence Kane, a senior from Georgetown Visitation School in Washington, wearing a T-shirt with the message “No More Fossil Fuels,” said taking part in the march was a way to stand with others in a movement inspired by a 16-year-old certainly, but for them, by Pope Francis.

“We believe God’s called us to be good stewards of creation,” she said, adding that they are the “Laudato Si’ generation.”