Church leaders, diplomats come together to pray for work of United Nations 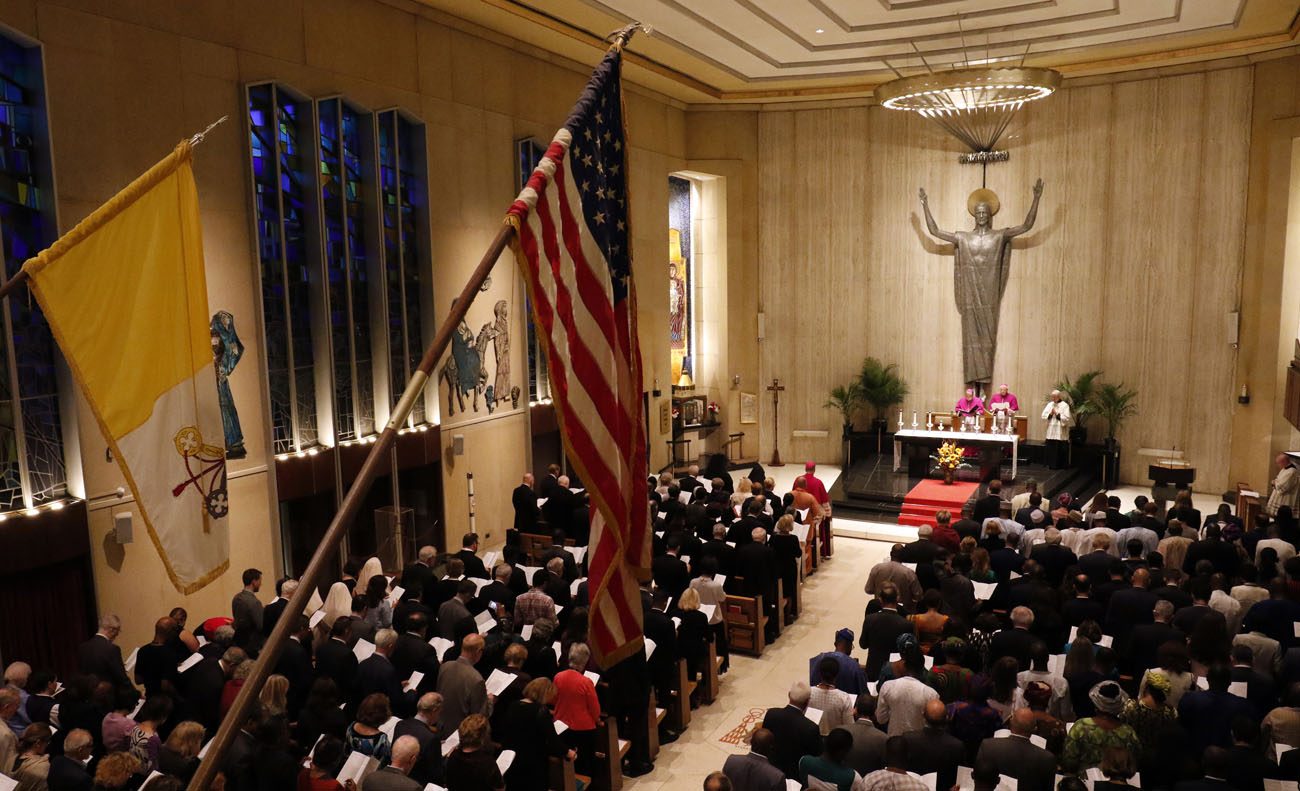 United Nations diplomats and other guests gather for a prayer service Sept. 16, 2019, at Holy Family Church in New York City. The service, hosted by the Vatican's Permanent Observer Mission to the U.N., was held on the eve of the opening of the 74th session of the U.N. General Assembly. (CNS photo/Gregory A. Shemitz)

NEW YORK (CNS) — Bishop Paul Hinder, apostolic vicar of Southern Arabia, told U.N. diplomats and other attendees at a New York prayer service Sept. 16 that “all of humanity is bound by a basic fraternity grounded in the God who has created us.”

This understanding is at the heart of what he called an extraordinary declaration signed in February by Pope Francis and Egyptian Sheikh Ahmad el-Tayeb, grand imam of al-Azhar, a leading authority for many Sunni Muslims.

Bishop Hinder was talking about the Document on Human Fraternity for World Peace and Living Together, signed by the two religious leaders in the United Arab Emirates Feb. 4. It rejects violence and terrorism and promotes identity, dialogue and harmony.

“The declaration is an appeal to all people of goodwill to put aside particular and egotistic interests, be they individual, national or continental, to break down the walls in our minds and to cross the borders in order to promote and build up justice and peace,” the bishop said.

He made the remarks during a service on the eve of the opening of the 74th session of the U.N. General Assembly. Held at Holy Family Church in New York City, it was hosted by the Vatican’s Permanent Observer Mission to the U.N. and led by Archbishop Bernardito Auza, the Vatican’s U.N. nuncio.

The document signed by the pope and the grand imam “points at certain urgent topics which can be addressed only if religions are doing their duty properly and if the respective societies, their governments and the international community as a whole are working together,” Bishop Hinder said.

He told the U.N. diplomats: “This is where your own deliberations in the coming days must lead: in making provisions for protecting the family as the fundamental nucleus of society and humanity; providing right education for children, avoiding everything that could lead people to extremism and violence.”

The document also says, he noted: “We resolutely declare that religions must never incite war, hateful attitudes, hostility and extremism, nor must they incite violence or the shedding of blood.”

Bishop Hinder highlighted several principals in the document, including its insistence that to guarantee equality of rights and duties, “it is crucial to establish in our societies the concept of full citizenship and reject the discriminatory use of the term ‘minorities.'”

“The East and West have to find a convergence of mutual collaboration on the basis of their complementary values,” he said, quoting the document.

“The rights of women, of the families and of the elderly people have to be further developed and respected,” he added.

Bishop Hinder said he has seen the document begin to bear fruit in the region where he has served for 15 years, but “there is still a long way to go.”

“I simply wish to mention the disastrous war in Yemen, where millions of people are longing for justice and peace. Who will have the courage to break the vicious circle of violence?” he added.

He ended his reflection by invoking the words of one of the Catholic Church’s great peacemakers: “On this vigil of the opening of the assembly, let us make a humble, joint and earnest prayer to the Father of the universe in the spirit of St. Francis of Assisi: ‘Make me an instrument of your peace!'”

NEXT: Real Presence of Christ not ‘opinion,’ but ‘foundational’