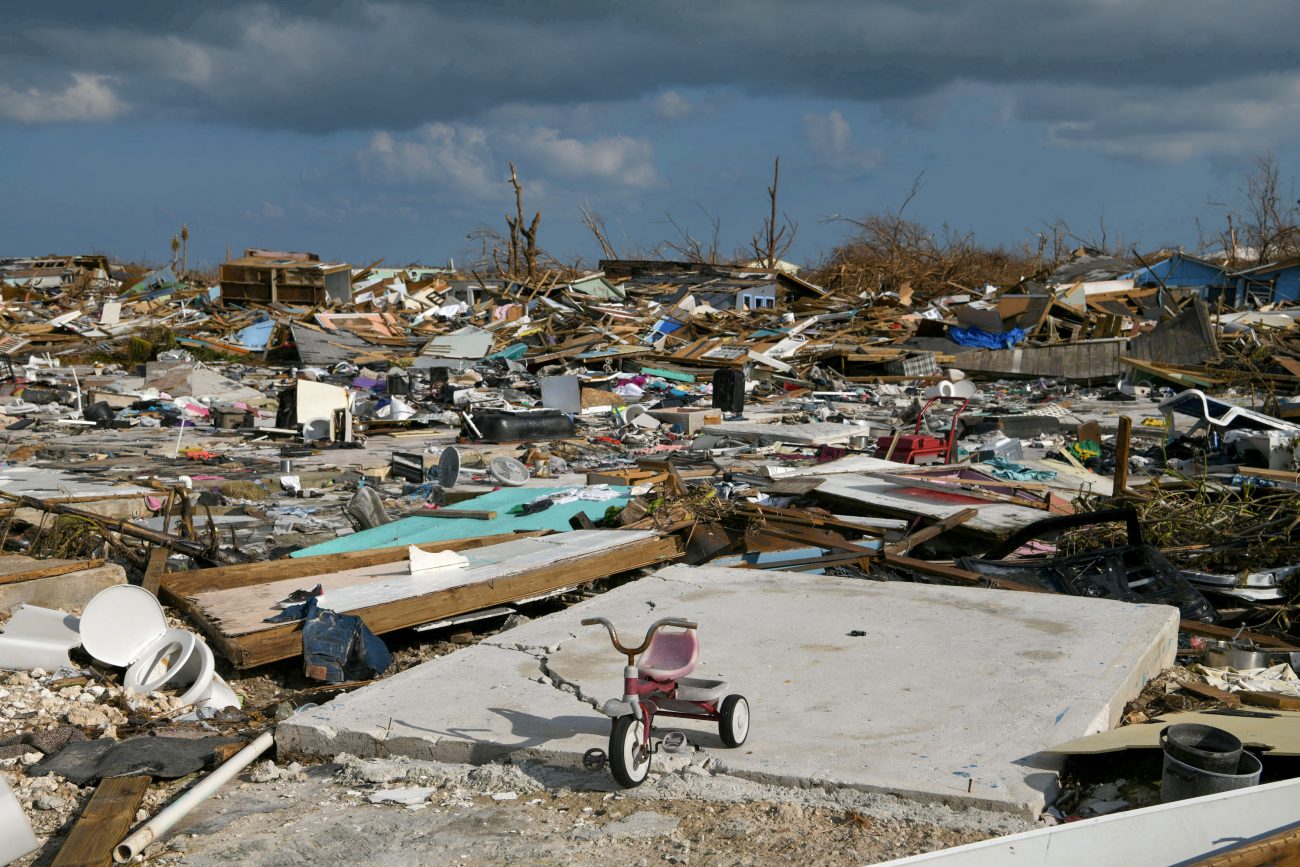 A child's bicycle is seen in a destroyed neighborhood Sept. 7, 2019, in the aftermath of Hurricane Dorian on the Abaco Islands in Marsh Harbour, Bahamas. As catastrophic as Hurricane Dorian was, the characteristic optimism of Bahamians will help soften the painful recovery to come, according to a hurricane-preparedness volunteer in Nassau. (CNS photo/Loren Elliott, Reuters)

MIAMI (CNS) — As catastrophic as Hurricane Dorian was, the characteristic optimism of Bahamians will help soften the painful recovery to come, according to a hurricane-preparedness volunteer in Nassau.

“There was nothing we could have done to prepare (for Hurricane Dorian), but when you talk to me again five years from now, I will be happy to tell you we will be back on our feet again because we are very resilient people,” said Basil Christie, a former religious education director for the Archdiocese of Nassau in the Bahamas.

Now a retired insurance executive, he said he regularly assists the Catholic Church with hurricane preparedness and recovery. He spoke by phone Sept. 10 with the Florida Catholic, Miami’s archdiocesan newspaper.

Christie is a native of the Bahamas and for the past 15 years in his retirement, he has traveled to the country’s many islands to coordinate and promote volunteer hurricane preparedness programs and follow-up recovery efforts after many lesser hurricanes touched parts of the nation.

He estimates that each year at least some part of the Bahamas has suffered hurricane damage and that although the country has high building code standards, Dorian’s 200-mph wind gusts and considerable storm surge means those building codes will have to be revisited.

“Normally the maximum wind is 110 mph and restricted to the southern islands,” he said.

Also, in previous years, hurricane winds blew off roofs, but Dorian blew homes off their foundations on the Abaco and Grand Bahama islands, “so it is a different situation,” he added.

“There are lessons to be learned from this: Our building code needs to be augmented, and we will need better shelters,” Christie said, adding that so many families have stories of watching family members get washed out to sea in the storm.

In the days since Hurricane Dorian, he has been helping coordinate volunteer efforts from Nassau, where cellphone communications are working, and he planned to travel soon to Grand Bahama Island.

He said evacuated families arriving in Nassau are being placed in ad hoc housing situations including gymnasiums, orphanages, convents, hostels and hotel rooms with sometimes four and five people to a room.

“We are having to create as we go,” he said, noting that many evacuees have families in Nassau, but those who don’t are staying in local Catholic and public schools.

Christie echoed concerns that the official death toll, at least 50 as of Sept. 12, is likely to soar, particularly from shantytown communities of undocumented people reportedly living in the Abaco Islands.

“There are a lot of dead bodies and it is the first time in our history that we had to initiate mass graves whereas others were simply taken out to sea by the (storm surge),” he added.

Christie praised the local generosity of business and organizations in the Bahamas, the international cruise lines as well as other Caribbean nations and agencies in Florida and the United States for sending material and financial support following the hurricane.

“This has brought out the good in people and the notion that we are your brother’s keeper,” Christie said.

“Naturally, the politicians are lashing out at the government, but an astonishing and overwhelming thing is that all these people are coming to Nassau and they are finding them a place to stay, ” he said.