Many moving pieces in Colombia peace accord 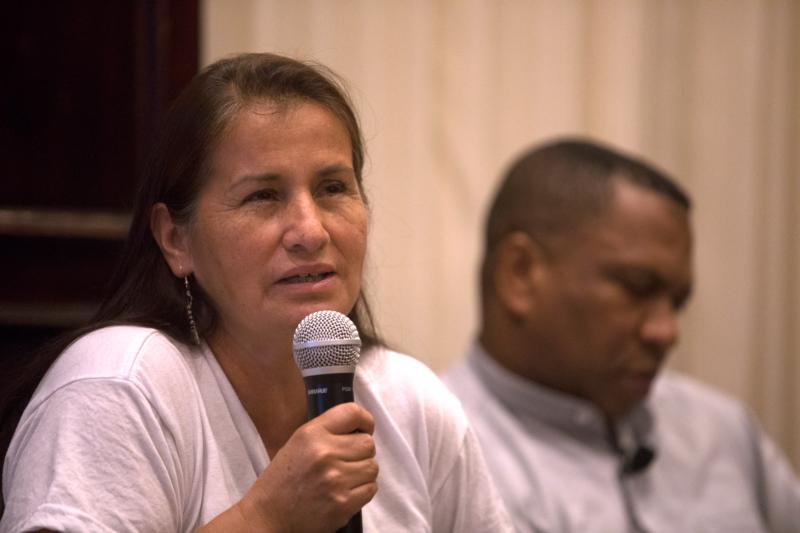 Jacqueline Castillo Pena of Colombia speaks alongside Father Sterlin Londono, a priest from the Diocese of Quibdo, Colombia, during a Sept. 18, 2019, panel discussion on the 2016 Colombia Peace Accords at the National Press Club in Washington. Pena is the sister of Jamie Castillo, who disappeared in Bogota Aug. 10, 2018, and was found dead two days later in Ocana. (CNS photo/Bob Roller)

WASHINGTON (CNS) — Signing a peace agreement is one thing. Implementing it is quite another.

The detailed accord between the Colombian government and armed rebels who had been fighting the government for about 50 years was signed in 2016, but key parts of the agreement have yet to be fully implemented. One reason is lower oil prices, giving the national government less revenue to implement the accord.

One aspect of the agreement left somewhat in the lurch is justice for victims, or their next of kin.

“In Colombia, we have carried out ways to rise up, and to say we are victims and to move a way forward,” said Father Sterlin Londono, a priest of the Diocese of Quibdo, and a panelist at a Sept. 18 conference in Washington on the accord’s implementation.

Speaking through an interpreter, Father Londono indicated he has been threatened with death. Another panelist said he assumed all panelists at the daylong conference have been threatened; none spoke up to say otherwise.

Xiomara Balanta, vice president of the Special Jurisdiction for Peace — an agency created by the accord — said the agency is working with the nation’s Truth Commission, which also was formed in the wake of the agreement, to make sure all victims have a chance at justice.

To date, Balanta said through an interpreter, about 10 percent of all victims have gone through the process.

She set the estimate of those who were kidnapped or suffered other atrocities at about 820,000. “We’re talking about decades of armed conflict, and we’ve only got a limited amount of time,” Balanta noted, citing “a deficit of legitimacy” in the South American nation. As a country, she added, “we weren’t familiar with peacebuilding.”

After the Argentine example during its “dirty war” in the 1970s and ’80s, those who vanished — mostly likely at the hand of the government or its allies — became known as “the disappeared.” In Colombia, however, they have become known as “false positives.”

Jacqueline Castillo Pena, whose brother was killed in an extrajudicial slaying in 2008, is president of Mothers of False Positives. She said her organization uses “art and pedagogy” to ease the pain of the past to signal a better way forward in Colombia.

Speaking through an interpreter, she said, “We don’t want to see what happened to our families happen again. We don’t want any more bloodshed.”

One thorny issue in Colombia is drugs. Many rural Colombians have raised coca, used in the production of cocaine. For some, it means their only hope at a decent income. For others, armed anti-government groups or drug gangs told the farmers to grow coca. In still other instances, the farmers were run off their land and sometimes killed if they resisted.

Complicating matters still further was the government spraying of coca crops with glyphosate, which was recognized in 2015 by the World Health Organization’s International Agency for Research on Cancer as “probably carcinogenic in humans,” and also the leading herbicide used in the United States under the brand name Roundup.

The spraying has stopped, according to Adam Isacson, director for defense oversight for the Washington Office on Latin America, sponsors of the conference, but he said the Colombian government has recently issued an opinion that it may resume spraying in limited cases.

Isacson said of the many options to stem coca growth is to establish a state presence with low tolerance for corruption” and to “enforce the rules of a legal economy.” Crop substitution coupled with a state presence in Colombia’s rural regions may also have a chance of success.

Maria McFarland Sanchez-Moreno, executive director of the Drug Policy Alliance, said world leaders may need to rethink their “war on drugs” strategy, given how much money has been spent on such efforts since the late 1960s with little to show for it.

“We’ve spent trillions of dollars” on fighting drugs, Sanchez-Moreno said, and “the single most arrested offense in the United States is possession of drugs for personal use,” with about 1.5 million arrests annually for that crime, yet those arrested are “three times more likely to be black or brown” than their white counterparts despite the same drug usage rates.

NEXT: Pew survey looks at public’s level of confidence in nation’s leaders