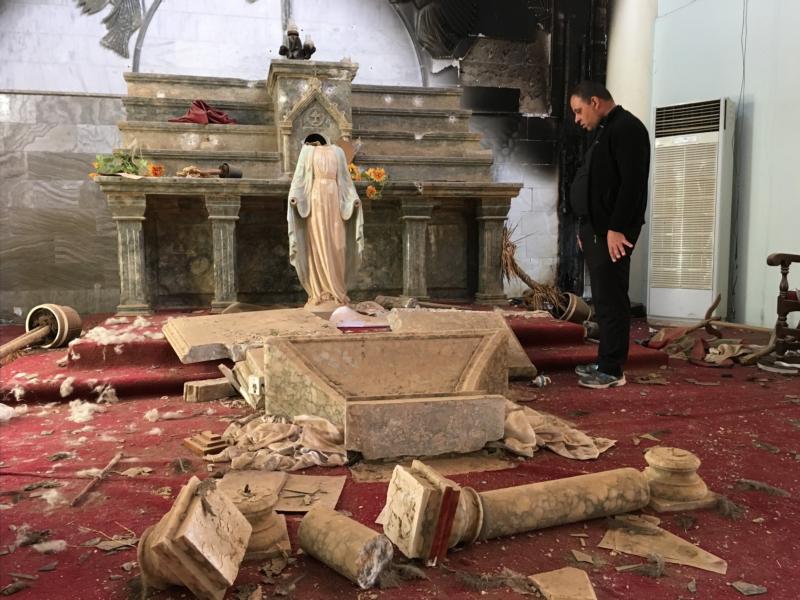 A Catholic church destroyed by Islamic State militants in Karamdes, Iraq, is examined by a priest March 6, 2018. The genocide conducted by the Islamic State against Christian communities in Iraq and Syria has turned into continued harassment by Iran-backed militias and shows no signs of abating soon, said speakers at a Sept. 26, 2019, hearing in Washington. (CNS photo/courtesy Archdiocese of Irbil)

WASHINGTON (CNS) — The genocide conducted by the Islamic State against Christian communities in Iraq and Syria has turned into continued harassment by Iran-backed militias and shows no signs of abating soon.

This was part of the bleak picture explained Sept. 26 at a hearing conducted by the U. S. Commission on International Religious Freedom.

There were outlines of atrocities, but few designated solutions, despite the millions invested in Iraq by the U.S. government.

“Recent years have been especially unkind to Iraqi religious minorities,” said Tony Perkins, chairman of the commission. “The rise of ISIS in 2014 compounded these challenges.”

The Islamic State, or IS, as it is more commonly known now, was driven out of its last caliphate stronghold in Syria in April. But outliers have been conducting guerrilla attacks, and this is compounded by the militias, called Popular Mobilization Forces, surrounding the Christian villages and turning homes into empty hulls without plumbing or electricity.

The Christian minority population in the region before the war was in the millions. Now, there are only an estimated 200,000 remaining. As many as 150,000 remain in refugee camps.

No Iraqi Christian leaders spoke or were represented at the hearing.

Hallam Ferguson, an assistant administrator of the U.S. Agency for International Development, pointed out that American aid to the region has increased to $380 million, with faith-based partners including Catholic Relief Services and the Knights of Columbus.

CRS, which is the U.S. bishops’ overseas relief and development agency, will administer a $6.8 million contract for Chaldean Catholics in Archdiocese of Irbil, Iraq, USAID earlier announced.

“We are struggling against tectonic forces in Iraq,” Ferguson said. “Decades of government neglect and corruption have marginalized these communities.” Until the Iraqi government improves security, “we will continue to see limited returns.”

USAID defines success by the number of religious minorities willing to return to their home villages “on their own terms.”

The militias harassing Christian minorities are formally part of the Iraqi government, and Ferguson added that the U.S. “is not satisfied with their command and control.” Orders appear to originate at lower levels of the organizations.

Reine Hanna, director of the Assyrian Policy Institute, told the panel that the Ninevah Plain Protection Units, which are military units formed to fight off IS intrusion, has been proven to be an American ally.

“The communities of the Ninevah have always been called ‘the voiceless.’ But they’ve always had voices. The trouble is, no one’s been listening.”

The Yazidis, who are practitioners of Yazidism, a monotheistic faith with some similarities to Christianity and Judaism and live largely in Iraq, “have always been the last in Iraq to receive anything,” said Pari Ibrahim, executive director of the Free Yezidi Foundation. “We must have the chance to join the modern economy.”

Politically, they are underrepresented “in every possible way,” she added, holding only one seat in the Iraqi parliament, and the public educational system teaches children “the most vicious stereotypes of the Yazidis.”

A further challenge to refugees, when they survive the harassment, is getting “secure title to their land,” said Scott Portman, a director of Heartland Alliance International.

This is a particular problem for displaced Christians, since the typical claim of corrupt government officials “is that their land was abandoned.”

“Refugees are not getting compensation for the homes they have lost. They need to get that from the Iraqi government.”

And further, “They need justice. They have to be trials of the ISIS perpetrators, with a focus on those who committed atrocities.”

In a Wall Street Journal commentary in April, Carl Anderson, Supreme Knight of the Knights of Columbus, wrote: “Washington’s designation of Iran’s Islamic Revolutionary Guard Corps as a foreign terrorist organization should encourage Baghdad to rethink its embrace of Iran-backed militias. If Iraq wants Iraq to remain Iraq, it should get serious about protecting minorities before it is too late.”

PREVIOUS: Caring for the poor, the hungry ‘is who we are’ as church, cardinal says

NEXT: Reviewer says N.Y. Archdiocese complying with charter in ‘all respects’