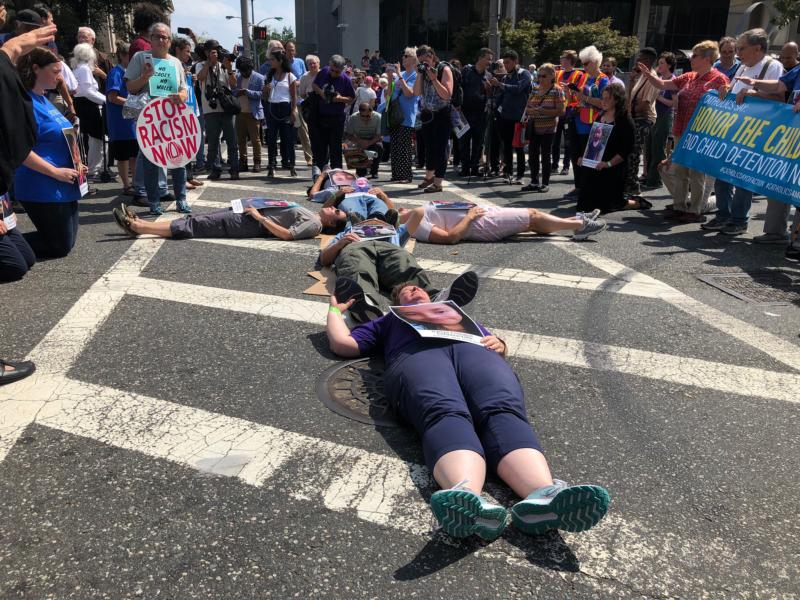 Religious groups protest outside the federal building in Newark, N.J., Sept. 4, 2019, in support of humane immigration reform. Cardinal Joseph W. Tobin of Newark was among those gathered and led the chant: “Stop the Inhumanity!” (CNS photo/Jai Agnish for the Newark Archdiocese)

WASHINGTON (CNS) — Cardinal Joseph W. Tobin of Newark, New Jersey, blessed and then prayed near a group of Catholics who blocked a crosswalk, arranging themselves in the shape of a cross in front of Immigration and Customs Enforcement in Newark Sept. 4, to protest the detention of children and families in immigration facilities.

About 400 participated in the event, which included a procession toward the ICE building as the Newark archbishop led the crowd in a chant of “stop the inhumanity.”

“I am Joseph, your brother, who has been heartbroken by the inhumanity,” Cardinal Tobin had said earlier as he called for a stop to immigration detention of children and their families.

“I ask Catholics and others of goodwill to contact their elected officials and urge them not to manipulate immigrant families as political pawns,” he said.

“According to those who treat them, many children enter the (immigration) facilities after fleeing violence and experiencing direct threats to their safety during their journey to the United States,” the report said. “Some children also experienced the trauma of being unexpectedly separated from their parents as a result of U.S. immigration policies.”

The Catholic protesters and activists as well as the cardinal spoke against the separations, whether at the border or after the deportation of a parent.

“Children will bear the trauma wrought by immigration enforcement raids, separation from their families, and indeterminate detention,” Cardinal Tobin said. “These draconian measures are not, they are not, a solution to our broken immigration system. They are violations of human dignity and are contrary to all religious teachings and the sacred call to care for our most vulnerable populations. Unlike others, we don’t have to look up Bible verses to justify the building of walls. There are none.”

A 27-year-old named Liborio Adorno, who said he was brought to the U.S. as a 7-year-old without legal documents, spoke to the crowd.

“It’s pretty sad for me to see the pictures of children and babies because I identify with them,” he said. “I came when the immigration crackdown wasn’t as bad, and it forces me to think: What if I had crossed later?”

It’s hard to separate himself from the images of immigration detentions, Leonardo said, and it’s hurtful to hear others vilify parents like his, who made the immigration journey wanting the best for their children.

“If it was an American family and they went to another country, they wouldn’t be seen as criminals, they would be seen as heroes,” he said. “My parents aren’t criminals. They did what they had to do and as they finished their journey, mine began.”

These days, he organizes communities via the Cosecha Movement, he said, in hopes that others recognize the humanity of those like his family.

Another organizer called on a grandmother who had come in contact with the group as she was dropping off her daughter with officials at the ICE building and asked her to speak to the crowd. Her daughter had been summoned to attend a meeting with a passport in hand and a plane ticket to her native Honduras.

The woman caring for her grandchildren said they didn’t know whether they would see her again if ICE decided to detain her.

“I love America,” she said in Spanish. “We come here to work, in search of food, in search of the blessings that this country can provide. I give thanks to America and all we want is an opportunity.”

Though Cardinal Tobin was the only prelate present, several groups of women religious and lay groups attended, including the Sisters of Mercy of the Americas, the Sisters of St. Joseph, the Sisters of Bon Secours, the Ignatian Solidarity Network and several Franciscans and Jesuits, among others. They had first gathered at St. Mary’s Catholic Church in Newark, a parish was founded to serve working-class Irish, as well as German immigrants who worked in the city’s factories.

Sister Ann Scholz, associate director for social mission for the Leadership Conference of Women Religious, spoke of the history of women religious as members of immigrant communities who also served those communities. Their action in the modern immigration battle is a continuation of work that began long ago, she said.

“We have joined the tens of thousands who are outraged at the horrific treatment of immigrant children and families by our own government,” she said. “We are here today to say loudly and clearly, stop the inhumanity. The mistreatment of children, the separation of families, the denigration of our immigrant brothers and sisters done in our name must stop.”

Though they didn’t attend physically, several bishops sent statements supporting the Newark event, which the group Faith in Action said is part of an ongoing national campaign “developed by a Catholic Coalition of organizations to pressure the Trump administration and Congress to end the policies and practices that routinely traumatize children, particularly the policy of child and family detention.”

The first event took place in Washington on July 18 and a third gathering is set for Oct. 11-13 in the border town of El Paso, Texas, said Eli McCarthy, director of justice and peace at the Conference of Major Superiors of Men.

Washington Archbishop Wilton D. Gregory sent his written support for the event, saying in a Sept. 4 statement that Christians must recognize the face of Christ in migrants and refugees and respond to them “just as we would to Jesus.”

“Their plight should arouse our compassion, particularly the children and families, so many of whom have been held in detention at the border,” he wrote, while advocating for community-based alternatives to detention, support for refugee resettlement programs and addressing the conditions that cause others to leave their homelands.

“We ourselves must do what we can to help, including raising public awareness to press for positive action by the authorities at the border and by Congress and the Administration,” Archbishop Gregory wrote.