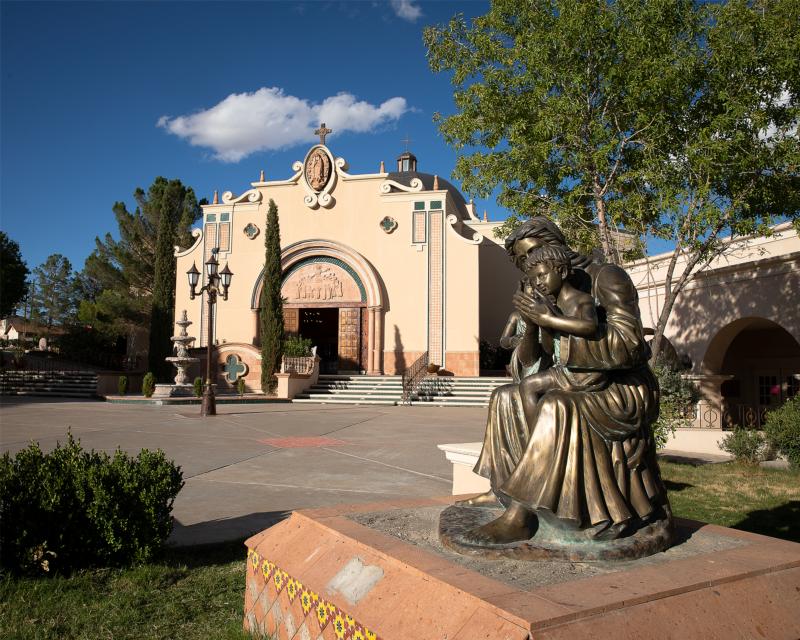 A statue of Christ with children is seen near St. Pius X Church in El Paso, Texas, Sept. 23, 2019. Bishops celebrated Mass in the church that day during a Sept. 23-27 pastoral visit, sponsored by various offices of the U.S. Conference of Catholic Bishops and other national organizations. The aim of the visit was to highlight the church’s ministry to migrants, the border conditions and immigration laws affecting them, and their material and spiritual needs. (CNS photo/Tyler Orsburn)

EL PASO, Texas (CNS) — You could feel the hurt that remains in this border city by the tension and occasional tremble in the voices.

When local Catholic leaders Sept. 23 welcomed a delegation from the U.S. Conference of Catholic Bishops, including lay ministers who tend to migrants in various parts of the U.S., they proudly spoke of the “DNA” of the El Paso community, one that doesn’t treat those who aren’t from the area as strangers.

El Paso, as a community, practices much of what the Gospel asks of believers, said Dylan Corbett, executive director of the local Hope Border Institute, which helps migrants.

“It welcomes in a real way, in a concrete way, the stranger, the Christ in our midst,” he told the group gathered at St. Pius X Church on the first day of a weeklong pastoral “encounter” with migrants in the region.

When Central Americans and other migrants began appearing in this border city in large numbers during the past few years, the El Paso community fed them, clothed them and helped them contact family with whom to stay in other parts of the country. Sometimes they helped as many as 1,000 per day. When their numbers dropped because U.S. government policies changed, leaving the migrants stranded on the Mexico side, it “felt like a good friend had died,” recalled El Paso Bishop Mark J. Seitz.

And it’s exactly that welcoming attitude, that embracing of strangers from Latin America, that a gunman tried to extinguish Aug. 3, when he opened fire at the local Walmart, killing 22, including many Catholic El Pasoans and their Mexican neighbors who died after being shot.

“That’s what was attacked on that day,” said Corbett. “But we’re also a resilient community, and we won’t give in to the fear that drove that attack. And we’ll continue to be who we are and faithful to our DNA.”

Corbett, along with other local Catholics, are hoping the group visiting El Paso and its surrounding area Sept. 23-27 will act as ambassadors for the realities in border cities, including people being victims of anti-immigrant and racist acts, such as the one that took place this summer.

The Trump administration, “with apparently sufficient backing from people in society, has raised this anti-immigrant sentiment to a whole new level, a whole new extreme, and we’ve really felt it personally here in this border region. It’s not somebody else. It’s us,” said Bishop Seitz.

They have been referred to as a place that is experiencing an “invasion” from outside, “that rapists and thieves and gang members are crossing over, ” said Bishop Seitz. But that’s not the case, he said.

El Paso merely stepped in to help when it saw a humanitarian crisis at its doorstep and decided to help vulnerable people in need. That’s what the local diocese hoped to explain to its Catholic visitors.

There was no government support to help the migrants who had been dropped off by immigration authorities without warning in their cities, said Bishop Seitz, and many had been released after being stripped of “whatever they had when they arrived: their phones, their rosaries, you name it.”

“I’m very proud of our community, of our church, for its amazing response,” he said. “Can you imagine? We’re one of the most economically challenged regions of the country based on income, but we were receiving more than 1,000 a day, feeding them, clothing them, giving them a chance to bathe, giving them chance to contact families. We were doing that for days, for months, purely a community response.”

It was painful when those actions were said to be the reason El Paso was targeted, he said.

Suspected shooter Patrick Crusius, believed by authorities to be an anti-immigrant, white nationalist, had railed in writing about the “Hispanic invasion of Texas” prior to the shooting.

“While I would never suggest a direct connection between the (Trump) administration’s words and Aug. 3, certainly it was no mistake, it wasn’t just coincidence, that a man from the Dallas area decided to travel 640 miles to our border binational cities in order to kill as many Mexicans and people of color as he could,” Bishop Seitz said.

Bishop Oscar Cantu of San Jose, California, who previously was the bishop of the Diocese of Las Cruces, New Mexico, was clearly moved by Bishop Seitz’s recounting of the situation. His community, also one of immigrants, experienced similar violence in late July during a family festival in the town of Gilroy, which celebrates its most popular crop: garlic.

“Families come out to enjoy food and it was disrupted by gunfire. Three innocent people died, two of them children. One whom I buried,” he said, choking back tears.

When he saw the news about the Walmart shooting, he talked to parishioners in California and told a couple about having been a bishop in El Paso’s neighboring city of Las Cruces.

“I don’t know how these parishioners saw me … but when I made comment, I saw surprise in their faces when I mentioned that I (had been) the bishop of the twin city to El Paso, to which I traveled in and out of. I considered El Paso part of my home. As a Hispanic myself, I could have been targeted,” he said. “Maybe they didn’t see me as Hispanic but I saw the change in their complexion, in their eyes. At some point, when it becomes personal, when it becomes relational, that’s when it changes.”

He repeated the sentiment of others in the room about the symbolism, presumably of the border wall President Donald Trump keeps talking about building, to keep immigrants out.

“A wall has definitely been built,” he said.  “We have become the wall.”

But he urged the group to keep in mind Catholic teaching during their visit and what it says about the dignity of human life.

“The Catholic catechism tells us that human dignity is based on our being created in God’s image and likeness, not on our race, not on our, the size of our bank account, not according our citizenship, but because we are human,” he said.

PREVIOUS: For Ohio priest, bilingual Mass is in English and American Sign Language

NEXT: El Paso’s Bishop Seitz asks migrants be treated as Jesus would be treated