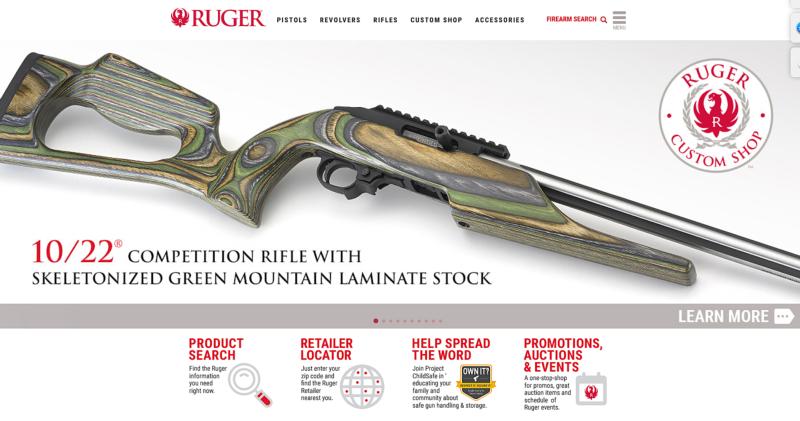 This is a screen grab from the website www.ruger.com. At the shareholders’ meeting of Sturm, Ruger & Co. last year, close to 69 percent voted in favor of a nonbinding resolution to have the company adopt a human rights policy as a response to gun violence in the U.S., said Dominican Sister Judy Byron, director of the Seattle-based Northwest Coalition for Responsible Investment. (CNS)

WASHINGTON (CNS) — The desire for action on preventing more gun violence may face hurdles in Congress, but those pressing for change are having an effect in the corporate boardroom.

While now may be the moment to effect changes in federal firearms policy, that moment did not come without a lot of groundwork, according to Dominican Sister Judy Byron, director of the Seattle-based Northwest Coalition for Responsible Investment.

“ICCR members did some initial work on guns in the early 2000s, and it’s been over the past couple of years that we picked up the issue again,” said Sister Byron, referring to the Interfaith Center on Corporate Responsibility, to which the Northwest Coalition belongs.

The current tactic is to urge firearms makers and sellers to adopt human rights policies.

“Do models exist? Yes, yes, yes. Hundreds of companies have adopted human rights policies,” Sister Byron told Catholic News Service in a Sept. 12 telephone interview from Seattle. She cited the Hershey Co., North America’s largest candy company. “They use a lot of sugar. How are those workers treated?” she asked rhetorically, adding that acknowledgment of the treatment of sugar harvesters is part of its policy.

Sister Byron also recalled the work that the late Capuchin Franciscan Father Michael Crosby did with tobacco companies, Altria among them. “This is a tobacco company. Right in their human rights policy they say they recognize that smoking causes serious disease and is addictive,” she said. “You could almost substitute words … for what a firearm manufacturer might say.”

Her work has focused as of late on two gunmakers: American Outdoor Brands, maker of Smith & Wesson guns, and Sturm, Ruger & Co. At the latter’s shareholders meeting last year, Sister Byron said, close to 69 percent of shares were voted in favor of a nonbinding resolution to have the company adopt a gun safety policy.

At American Outdoor Brands, an ICCR-sponsored shareholder resolution for a gun safety policy won with 52 percent of all votes cast, but the company has yet to produce one. Both companies have also refused to engage with ICCR members on gun safety concerns.

A vote at the company’s annual shareholder meeting Sept. 24, requesting a human rights policy, did not pass, according to the company, although vote totals were not immediately released.

“There’s some rule that they’re misinterpreting that what you say to one shareholder you have to say to all shareholders,” Sister Byron told CNS. “ICCR is celebrating 50 years and we’ve been talking to corporations and we still talk to corporations — hundreds a year.”

She quickly corrected herself. “We had some back-and-forth emails (with American Outdoor Brands). I guess they feel they had communicated with us. But they haven’t engaged us. And we would much prefer to engage with a company than have to resort to the proxy.”

Consider Walmart. “ICCR members have worked with Walmart since the Nineties on multiple issues,” Sister Byron said. “We know that after Parkland (the 2018 high school shooting that left 17 dead), Walmart raised the (purchase) age to 21, and they don’t sell assault weapons. But after the latest incident at El Paso at one of their stores, there was a lot of pressure on them about selling guns and ammunition.”

She added, “We had a face-to-face dialogue with executives at Walmart” — and not with some corporate functionary but with company president and CEO Doug McMillon.

“Walmart said, ‘Let’s have a conversation,'” Sister Byron said. “They talked to many stakeholders, not just ICCR. They really have to consider the risks to their customers as well as to society for whatever they did. We know what they did.” The company announced it would stop selling all handgun ammunition and certain short-barreled rifle ammunition.

Walmart also asked customers to not openly carry weapons into stores anymore. The open-carry request also has been made by the Walgreens and CVS drugstore chains and the Albertsons and Kroger supermarket chains.

But neither Sister Byron nor ICCR had anything to do with the letter signed Sept. 12 by 145 corporate leaders asking Congress to expand background checks for gun purchases and adopt “red flag” laws designed to keep guns out of the hands of people deemed to be dangerous.

Sister Byron remembers working with Dick’s Sporting Goods on the issue. “In December 2017 we filed a resolution asking what they were doing with the Sandy Hook Principles,” a response to the December 2012 shooting spree that left 26 dead — most of them young grade-school children — before the killer took his own life. “Unlike the gun manufacturers, they called us right away,” she said.

“The CEO was on the conversation and told us about the things the company was struggling with, because they were selling the firearms and ammunition. It was after Parkland that they made their decision to raise the age (for gun sales),” Sister Byron said. “They’ve really been a leader. They’ve even hired a lobbyist in D.C. to work on sensible gun reform.”

She added that for CEOs, “when you’re looking around for ‘who has my back,’ knowing that ICCR has my back makes a difference. Because we have a long history of working with companies. We really are promoting the common good, as well as society.”

NEXT: Cardinal Levada took U.S. experience with him to the Vatican