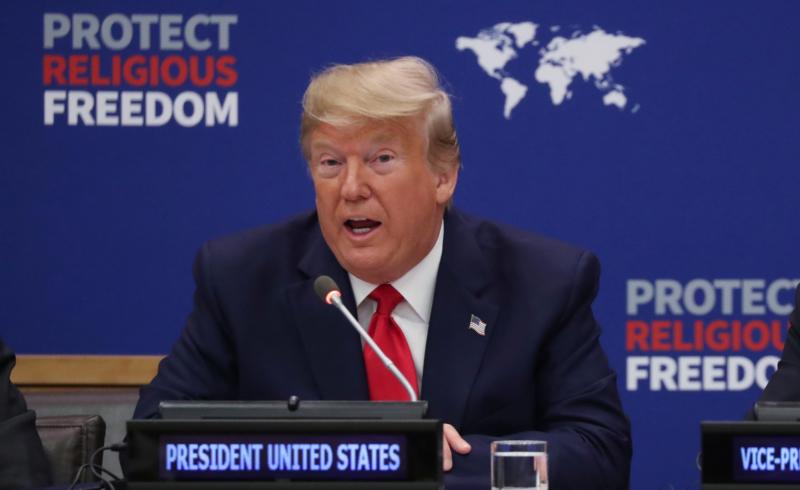 “To stop the crimes against people of faith, release prisoners of conscience, repeal laws restricting freedom of religion and belief, protect the vulnerable, the defenseless and the oppressed,” he said, “America stands with believers in every country who ask only for the freedom to live according to the faith that is within their own hearts.”

The United States “is founded on the principle that our rights do not come from government; they come from God,” Trump said. “This immortal truth is proclaimed in our Declaration of Independence and enshrined in the First Amendment to our Constitution’s Bill of Rights.

The Founding Fathers “understood that no right is more fundamental to a peaceful, prosperous and virtuous society than the right to follow one’s religious convictions,” he added. “Regrettably, the religious freedom enjoyed by American citizens is rare in the world.”

Trump also announced that his administration is committing an additional $25 million to protect religious freedom and religious sites and relics around the world. This is in addition to the administration’s previous commitment that includes providing direct U.S. aid to persecuted Christians in the Middle East, routing it through the U.S. Agency for International Development.

The text of the remarks Trump delivered at U.N. headquarters was released by the White House afterward.

The president said it was “so hard to believe” but that “as we speak,” several religious groups are being persecuted.

“Jews, Christians, Muslims, Buddhists, Hindus, Sikhs, Yazidis and many other people of faith are being jailed, sanctioned, tortured and even murdered, often at the hands of their own government, simply for expressing their deeply held religious beliefs,” he said.

Trump also announced the formation of a coalition of U.S. businesses for the protection of religious freedom, which he described as a first.

“This initiative will encourage the private sector to protect people of all faiths in the workplace,” he explained. “And the private sector has brilliant leadership. And that’s why some of the people in this room are among the most successful men and women on earth. They know how things get done and they know how to take care of things. … Great business leaders, great people of strength.”

Trump hosted the event, titled “Global Call to Protect Religious Freedom,” on the opening day of the U.N. General Assembly. Other speakers included U.N. Secretary-General Antonio Guterres, U.S. Vice President Mike Pence and a woman whose Uighur father has been imprisoned in China.

According to a Reuters story, the United Nations says at least 1 million ethnic Uighurs and other Muslims have been detained by China. The country “has been widely condemned for setting up complexes in remote Xinjiang that it describes as ‘vocational training centers’ to stamp out extremism and give people new skills,” Reuters said.

The Trump administration is spearheading the International Religious Freedom Alliance, an alliance of nations dedicated to confronting religious persecution around the world.

The U.S. State Department has hosted two Religious Freedom Ministerials to bring together religious leaders and government representatives from more than 100 countries to focus on the issue of religious persecution.