‘You have to have faith,’ Bahamian resident says of Dorian recovery 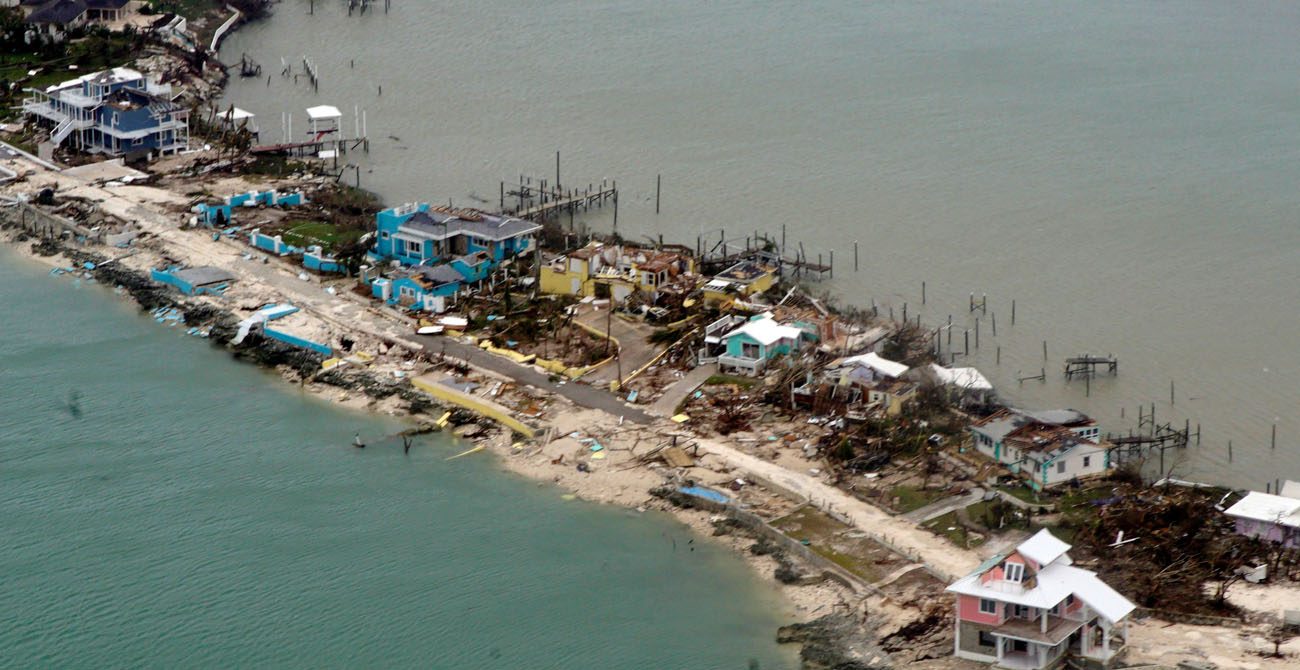 An aerial view shows Hurricane Dorian damage over an unspecified location in the Bahamas in this Sept. 3, 2019, photo. During Pope Francis' Sept. 4 flight to Maputo, Mozambique, the pontiff asked journalists to pray for victims of Hurricane Dorian, especially in the Bahamas. (CNS photo/Adam Stanton, U.S. Coast Guard, via Reuters)

WASHINGTON (CNS) — Kathy Nottage, a resident of Elbow Cay — an 8-mile-long stretch in the Abaco Islands of the Bahamas — has had to take a lot of things by faith in the days since Hurricane Dorian slammed into the Bahamas and left much of the islands in rubble or underwater.

She and her husband Brian, who own fudge and ice cream shops in Nassau, Bahamas, were in New York with friends before the storm hit, but her husband went back to board up the shops just prior to Dorian’s Sept. 1 landfall and its days of sustained hovering over the islands with record wind, rain and wave surges.

She received a text from him from a friend’s satellite phone saying: “Kathy all is well,” right after the storm hit and then hasn’t spoken with him since because phones are out.

Nassau was not as badly hit, so their shops are OK. She has also heard from her son who saw video footage taken by helicopter of the island where they live, that their house is still standing, although with some outside damage and decks destroyed.

“You have to have faith; It’s a miracle our home is still even standing,” she told Catholic News Service Sept. 4 by phone from Maryland, where she was staying with family. She said areas near their home were completely wiped out and then groupings of homes stood seemingly untouched.

Seeing the devastation from afar mostly makes Nottage feel guilty for not being there to help out and sad for everyone coping not only with damage but now with lack of water and food.

She said women, children and the elderly have been urged and helped to leave the small island she has called home, by boat. The urgent needs now are not only for basic supplies but for two-way radios for communication.

Cardinal Daniel N. DiNardo in a Sept. 4 statement said: “We are extremely mindful of the dire need faced by the community in the Bahamas so devastated by this catastrophic storm. We pray for all effected and invite Catholics and all people of goodwill to donate to Catholic Relief Services and Catholic Charities USA.”

Nottage said she is confident that locals, including her husband who is a fifth-generation Bahamian, will show their usual resiliency as they begin to rebuild.

She and her husband have lived in Maryland while raising their three sons and then went back and forth to the Bahamas, before moving there in 2000. Her husband was in the Bahamas in 1999 when Hurricane Floyd hit, which was not as destructive as Dorian, but still had a devastating impact. She said he was struck then by the strong sense of community there, how everyone worked together on roofs or clearing roads or just helping one another.

She is sure the same spirit will be at work now and has already heard how people are forming groups to organize and rebuild.

Nottage, who is Catholic, said there isn’t a Catholic parish on Elbow Cay, where there are about 200 full-time residents, but a priest comes by boat every Sunday for noon Mass under the fig tree in Hope Town.

When asked how people find out about this, she said word is out there on bulletins and announcements. Sure enough, an online search gives information about Sunday Mass in the park near the library behind the Methodist church.

The Mass crowd under the tree, she said, can number about two dozen or more, since many of the locals are Catholic. The Massgoers vie for spots in the shade and then go from Mass to a local restaurant, Harbour’s Edge, together for Bahamian specials of chicken souse or boiled fish.

The restaurant, she said, was destroyed in the hurricane.

Editors: Donations to CRS can be sent here and to Catholic Charities USA here.