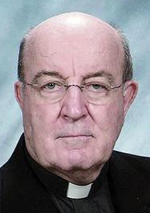 The son of the late Andrew F. Bartos and the late Elizabeth (Demyan) Bartos, he was born in Bethlehem, Pa., which was then part of the Philadelphia Archdiocese. He attended SS. Cyril and Methodius School, Bethlehem and Bethlehem Catholic High School before entering St. Charles Borromeo Seminary.

He was ordained May 8, 1954 at the Cathedral of SS. Peter and Paul by Archbishop John F. O’Hara, and his first assignment was as parochial vicar at St. Mary, McAdoo. He also served as parochial vicar at Sacred Heart, Palmerton and St. Francis of Assisi, Allentown, followed by faculty member at Msgr. Bonner High School and Bishop Kenrick High.

In 1959 he was released for service in the U.S. Air Force where he remained for 14 years.

Although Father Bartos as a chaplain did not carry a gun, his awards show he was clearly in harm’s way. Although the military gives no awards for the mental trauma that goes with combat, that may explain why, after Father Bartos’ release from military service in 1973, with the permission of the Philadelphia Archdiocese he spent almost two years in quietude at the Trappist Monastery of the Holy Spirit near Conyers, Georgia.

After his return to the archdiocese Father Bartos served as parochial vicar at Sacred Heart, Phoenixville; St. Henry and Our Lady of Ransom, Philadelphia.

In 1980 he reentered the U.S. Air Force where he remained for six years, which completed the 20-year requirement for a military pension, retiring with the rank of lieutenant colonel. He then served as parochial vicar at St. Justin Martyr, Narberth and St. Cecilia, Philadelphia.

He served as pastor of St. Justin Martyr from 1990-92 then as parochial vicar at St. Philip Neri, Pennsburg and St. Stanislaus, Lansdale. His final assignment was as senior priest at St. Dominic, Philadelphia until his retirement in 2000.

His cousin, Dr. Kathleen Kucer, remembers Father Bartos as “extremely attentive to the spiritual needs of everyone, and everybody came to him for help.” He was “a marvelous priest,” she said, “very good to his family and attentive to his parents. He had a passion for travel, and nothing was too challenging for him.”

Father Thomas Duffy, who is scheduled to be the homilist at Father Bartos’ funeral Mass, also recalls him as “an outstanding priest who loved the priesthood and bringing people to God. Father Bartos was very active in the faith, and always empathized with people,” he said.

There will be a viewing for Father Bartos at St. Francis Rehabilitation and Health Center, Darby on Tuesday, Sept. 24 at 9 a.m. followed by his funeral Mass celebrated by Archbishop Charles J. Chaput at 11 a.m.

In addition to Father Duffy as homilist, Edward J. Kennedy will concelebrate the Mass.

Interment will be at Incarnation of Our Lord Cemetery, Bethlehem, Pa.