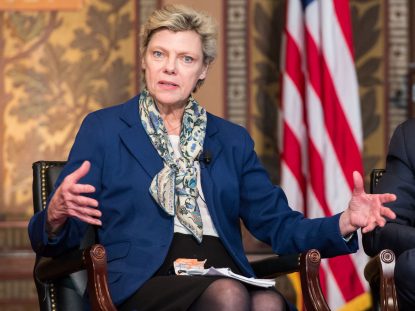 WASHINGTON (CNS) — Cokie Roberts, a broadcast journalist and political commentator who spoke publicly about her Catholic faith and her admiration for the Sacred Heart sisters who taught her, died Sept. 17 due to complications from breast cancer. She was 75.

Roberts, who died at her home in Bethesda, Maryland, was an Emmy award-winning reporter, author and frequent keynote speaker at Catholic college graduations. She was described as “a true pioneer for women in journalism,” by James Goldston, president of ABC News, her longtime employer. He said her “kindness, generosity, sharp intellect and thoughtful take on the big issues of the day made ABC a better place and all of us better journalists.”

She was inducted into the Broadcasting and Cable Hall of Fame and was listed one of the 50 greatest women in the history of broadcasting by the American Women in Radio and Television. She also was named a “Living Legend” by the Library of Congress in 2008.

Roberts started her radio career at CBS and in 1978 began working for NPR covering Capitol Hill, where she continued to work as a political commentator until her death. Roberts joined ABC News in 1988 and during her three decades there, she was a political commentator, chief congressional analyst and co-anchor with Sam Donaldson of the news program “This Week” from 1996 to 2002.

She was born in New Orleans in 1943 with the full name Mary Martha Corinne Morrison Claiborne Boggs and was nicknamed “Cokie” by her brother.

Roberts attended Catholic schools in New Orleans and Bethesda, run by the sisters of the Society of the Sacred Heart. During her career, she also wrote eight books, including a book with her husband, Steve Roberts, also a journalist, called “From This Day Forward” about their interfaith marriage. Steve is Jewish.

Cokie Roberts’ roots are both political and Catholic. She is the daughter of Hale Boggs, the former Democratic House majority leader and representative from New Orleans, who died in a plane crash in 1972. Her mother, Lindy, was elected to fill his seat and served nine terms. Lindy Boggs, who died in 2013, was appointed U.S. ambassador to the Vatican in 1997, a post she held until 2001.

Over the years, Roberts addressed big Catholic gatherings including those of the National Catholic Educational Association, Catholic Charities USA and the Leadership Conference of Women Religious.

In a 2014 interview with America magazine by Mercy Sister Mary Ann Walsh, who died the following year, Roberts said: “There is no way to talk about my faith absent the Society of the Sacred Heart. The women who were my teachers and remain my dear friends mean the world to me. They took girls seriously in the 1950s — a radical notion, so there was never any ‘grown-up’ need to reject them, only to thank them — and they keep the faith.”

When asked about her family’s Catholic and Democratic background, Roberts said it’s “an interesting balancing act in all kinds of ways to try to convince people that I am a fair-minded journalistic observer while coming from a family that has been strongly identified for many decades both politically and religiously.”

She said she also had made clear her “continuing commitment to Catholicism — as opposed to many who say, ‘I was raised Catholic.'” She said she didn’t think she had been “discriminated against officially” as a Catholic woman, but she also answered the question about this with her own question: “Are there people in this society still who think that to be a believer is to be a little bit simpleminded? Sure. And to be a Catholic, still a little simpler still? Yes,” she said.

That didn’t stop her though from being public about the role of faith in her life and in others’ lives.

During a 2009 LCWR meeting in New Orleans, she told the sisters that their vitality extends beyond their numbers and can best be seen in the lasting effects they have had on students and others they are serving.

“You wonderful, holy, awe-inspiring women — you women of spirit — have taught us well. Your teaching will go on, constantly creating a better world for the people of God, corralling the chaos to create a better quality of life for others that you can be proud of.”

She also praised the church’s efforts to help the poor at a 2006 Catholic Charities USA convention in Minneapolis where she said: “It seems to me that your issues are actually the ones that Jesus talked about.” She also challenged the conference participants to educate parishioners about the “option for the poor,” a Catholic social teaching that puts the needs of the poor and vulnerable first.

Funeral arrangements have not yet been announced.

Roberts is survived by her husband, her children, Lee and Rebecca, and her six grandchildren.

A statement released by her family said she will be missed “beyond measure, both for her contributions and for her love and kindness.”