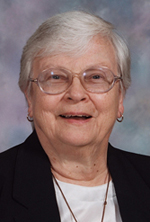 Sister Mary Jane Yassick, O.S.F. (formerly Sister Michael Mary), died Aug. 31 in Assisi House, Aston. She was 85 and had been a professed member of the Sisters of St. Francis of Philadelphia for 66 years.

She was born in Phoenixville and was a member of St. Mary Parish in Mount Joy, Pa. when she entered the congregation in 1950. She professed her first vows in 1953.

She also spent six years in parish ministry and education in Africa at Our Lady of Fatima Church in Zambezi and at Mpima Seminary in Kabwe. Additional ministry included one year in the San Bernardino Diocese.

Sister Mary Jane spent 10 years in the Archdiocese of Philadelphia, first as a teacher at St. Benedict School and then later as a volunteer at Our Lady of Angels Convent. She moved to Assisi House in 2012 where she served in prayer and hospitality ministry until her death.

The funeral Mass was celebrated Sept. 5 in Assisi house followed by burial in Our Lady of Angels Cemetery in Aston.

Sister Mary Jane is survived by her sister, Dorothy Krepps, nieces, nephews and by her Franciscan family.