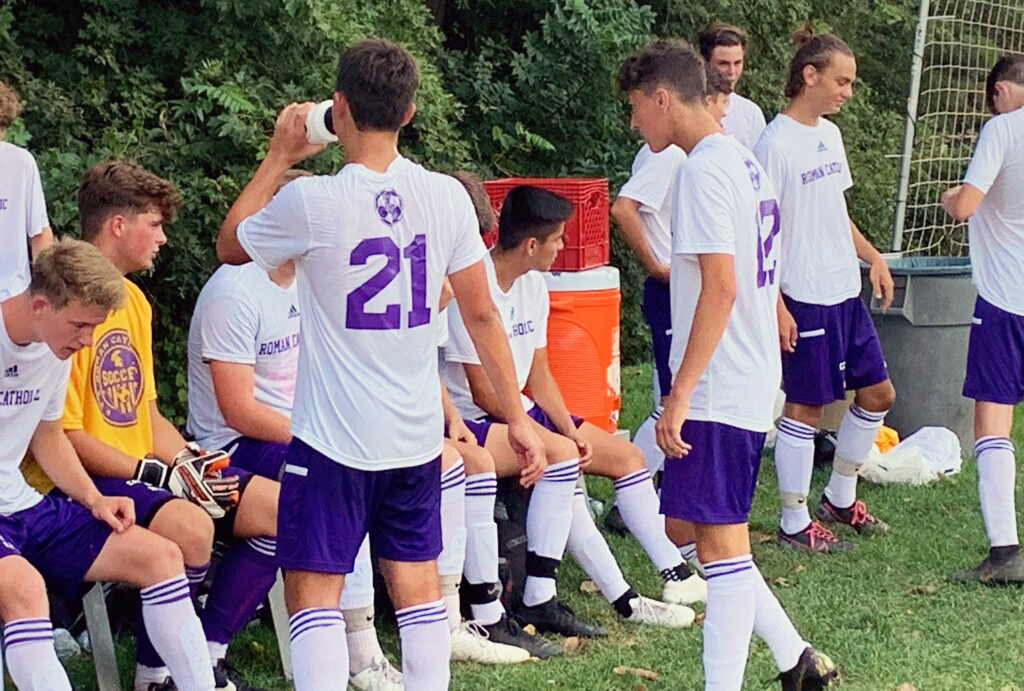 The Roman Catholic soccer team enjoys a brief timeout during a 9-0 victory over Archbishop Carroll in a Catholic League opener Sept. 5 in Radnor. (Photo by John Knebels)

Within the first few minutes, the disparity of talent and experience was clearly evident.

When it was over, Roman Catholic had overwhelmed host Archbishop Carroll, 9-0, in a Catholic League boys’ soccer opener Thursday afternoon, Sept. 5, before a sparse crowd in Radnor.

The Cahillites (3-0 overall) started early and never let up. They forged a 6-0 lead at halftime and added three more before the final horn.

“I think it was really important for us to get off to a strong start,” said senior goalie Kevin Tobin, who earned his third shutout of the season. “It gives us the momentum to keep putting the ball in the back of the net.”

Tobin hardly had to break a sweat. The Roman defense was barely tested thanks to the offense’s dominance. Most of Roman’s goals appeared to punctuate designed plays as opposed to simply taking advantage of Carroll mistakes.

“It tends to get a little boring,” said Tobin, “but it’s nice to see my team play good soccer.”

Coming off consecutive non-league wins by a composite score of 15-0, the Cahillites enjoyed the first chapter of a 12-game league regular season that, they hope, eventually leads to their sixth straight Catholic League championship appearance and ultimately their first Catholic League title since 2015.

“It’s very important that we started off the season with a victory like that,” said Newton. “The work rate and passing was strong, and we need to have that going into every game. There are parts of the game that we need to work on, and we will do so throughout the season and at practice.”

Newton said it “wasn’t really in my mind to get a hat trick” and downplayed his own contribution. He also was asked if it was difficult for the Cahillite players and fans to regenerate enthusiasm after losing in three straight league finals.

“I just try to focus on my game and do my job on the field,” said Newton. “I don’t really remember which goals I had, because the only thing that matters is the win.

“I know there’s people doubting us because of the result the past few years. But that’s alright because it just makes us hungrier for the plaque. We all have been playing together before high school, so we want to end our last season in a positive way.”