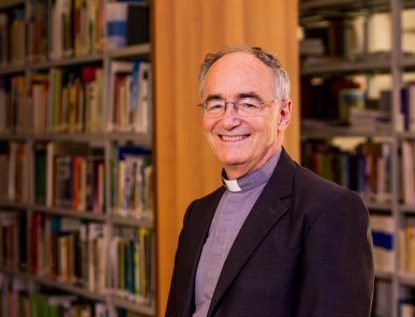 Jesuit Father Michael Czerny, undersecretary for migrants and refugees at the Vatican Dicastery for Promoting Integral Human Development, was one of 13 new cardinals named by Pope Francis Sept. 1. He is pictured in an April 10, 2017, file photo in Rome. (CNS photo/Robert Duncan)

WASHINGTON (CNS) — In working among the world’s poor for many decades, Canadian Cardinal-designate Michael Czerny was one of several Jesuits who volunteered to replace those murdered in 1989 in San Salvador, El Salvador, during the Central American country’s civil war.

“The most important role for the church to play now is to accompany the people and to make sure the truth is told,” Cardinal-designate Czerny told Catholic News Service in 1991, while he was vice rector of the University of Central America in San Salvador and director of its human rights institute. He also taught philosophy there and shared in parish ministry.

Cardinal-designate Czerny told CNS that by documenting and denouncing human rights violations, the institute contributed to U.N.-led negotiations that brought the war to an end.

“My two years in El Salvador were an immense lesson in the many human dimensions of a historical crisis of injustice caught up in the geopolitics of the day,” he said. “These are not abstract ideas. They are complex, lived, flesh-and-blood realities; they are the people, whom the church wants to be with.”

The 73-year-old undersecretary of the Section for Migrants and Refugees at the Dicastery for Promoting Integral Human Development was in Guararema, Brazil, when it was announced that he would be made a cardinal. He told CNS in a text message that he had not expected this.

He told Vatican News, “I thank God and I thank Pope Francis for this new mission, this new service, this great honor.”

Named by Pope Francis as a special secretary for the Synod of Bishops for the Amazon, Cardinal-designate Czerny wrote with a Peruvian bishop in the Jesuit journal, La Civilta Cattolica, that the synod will take place at a time when “both human and natural life are suffering serious and perhaps irreversible destruction.”

The synod, scheduled for Oct. 6-27, will focus on “Amazonia: New paths for the church and for an integral ecology.”

The Vatican announced that Pope Francis personally would ordain the cardinal-designate a bishop Oct. 4, the day before the consistory. Canon law specifies that a cardinal must be a bishop or archbishop before joining the College of Cardinals; in the past, some priests who were named cardinals when they were over the age of 80 have requested and received an exemption from that requirement.

Cardinal-designate Czerny was born in what was Czechoslovakia in 1949 and arrived in Montreal when he was 2 years old, he told CNS.

He graduated from Spokane’s Jesuit-run Gonzaga University in 1968 with a joint degree in philosophy and literature. The next year he entered the University of Chicago, where he earned a doctorate in the analysis of ideas and the study of methods — an interdisciplinary humanities program unique to the university — with a study of Christian-Marxist dialogue.

In 1973, he was ordained and, six years later, he founded the Jesuit Center for Social Faith and Justice in an east-end Toronto neighborhood. He speaks English, French, German, Italian and Spanish.

Cardinal-designate Czerny went to San Salvador after the November 1989 murder of six Jesuits, their housekeeper and her daughter. He left in 1992 to head the secretariat for social justice of the Jesuit curia in Rome. Ten years later, he became founding director of the African Jesuit AIDS Network, established by the order’s provincials of Africa. Based in Kangemi, a slum on the outskirts of Kenya’s capital, Nairobi, he monitored and coordinated Jesuit work on AIDS already taking place in 30 African countries.

AIDS represents “the greatest threat to Africa since the slave trade” and poverty “is both a cause and a consequence of HIV and AIDS,” he told CNS in 2004.

He also said the Group of Eight industrialized nations were not living up to their obligations to Africa when it came to fighting AIDS or alleviating poverty.

“Aid should be increased. … Considering how much money the G-8 make on Africa and the other poorest countries of the world, anything less than 0.7 percent (of gross national income) is scandalous and shameful,” he told The Catholic Register in 2007.

Cardinal-designate Czerny served as network director until 2009 and, at the same time, taught at Hekima College, a Jesuit school of theology in Nairobi.

In 2010, he was asked by Cardinal Peter Turkson of the Pontifical Council for Justice and Peace to be his personal assistant.

He served there for six years, until Pope Francis appointed him to his current undersecretary position.

Contributing to this story was the staff of The Catholic Register, Toronto.

PREVIOUS: Life without parole is not a solution to crime, pope says