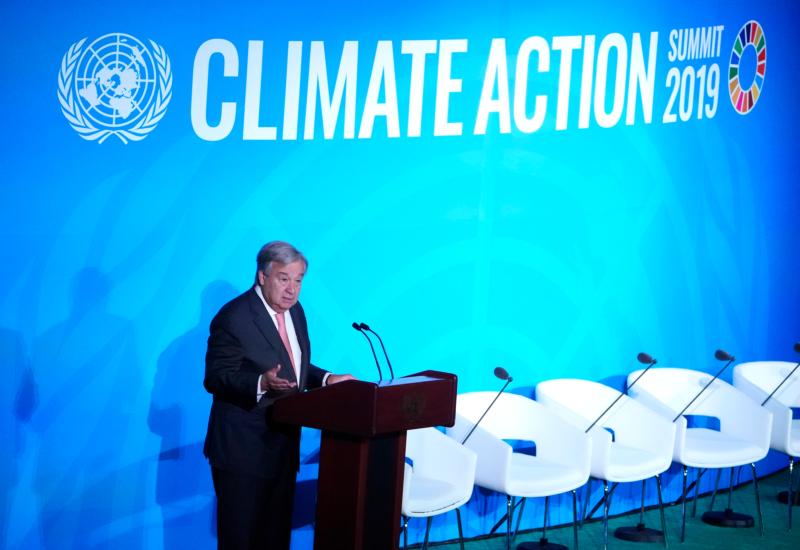 VATICAN CITY (CNS) — The international community must ramp up its efforts if it expects to mitigate the negative effects of climate change, Pope Francis said.

In a video message sent Sept. 23 to participants at the U.N. Climate Action Summit in New York, the pope said that while the 2015 Paris climate agreement raised awareness and the “need for a collective response,” the commitments made by countries “are still very weak and are far from achieving the objectives set.”

“It is necessary,” he said, “to ask whether there is a real political will to allocate greater human, financial and technological resources to mitigate the negative effects of climate change and to help the poorest and most vulnerable populations, who suffer the most.”

According to its website, the goal of the U.N. Climate Action Summit is to “ensure the global focus on climate gains momentum” as well as to make sure that “there is scrutiny on the investments countries are making in fossil fuels vs. renewables.”

Calling climate change “one of the most serious and worrying phenomena of our time,” the pope said that states have a duty to fight against it and that despite the weak response, a “window of opportunity is still open.”

“We are still in time. Let us not let it close. Let us open it with our determination to cultivate integral human development, to ensure a better life for future generations. It is their future, not ours,” the pope said.

Climate change, he added, is “related to issues of ethics, equity and social justice” and connected to an evident human, ethical and social degradation, which “forces us to think about the meaning of our models of consumption and production.”

Encouraging the participants at the summit, Pope Francis said that the climate crisis is not just an environmental issue, but a “challenge of civilization in favor of the common good.”

“And this is clear, just as it is clear that we have a multiplicity of solutions that are within everyone’s reach, if we adopt on a personal and social level a lifestyle that embodies honesty, courage and responsibility,” the pope said.

PREVIOUS: At age 80, Angola’s cardinal-designate still works among the poor

NEXT: Indonesian cardinal-designate known for justice and peace work