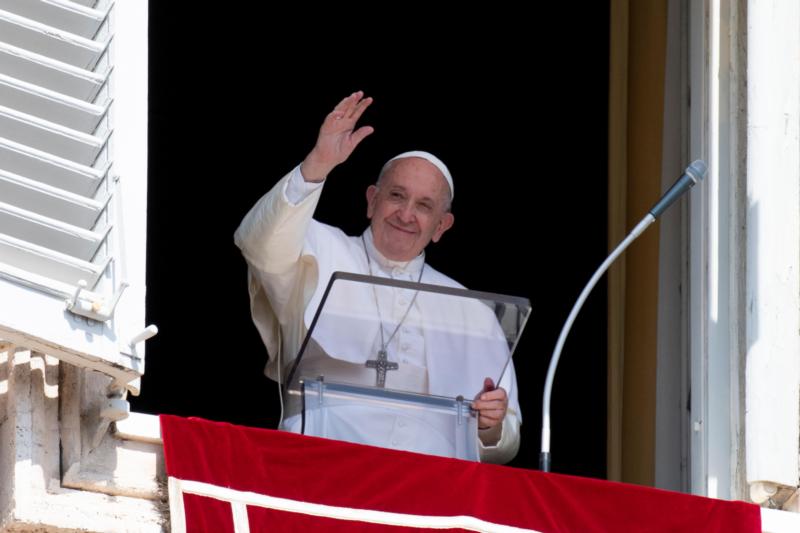 Pope Francis waves as he leads the Angelus from the window of his studio overlooking St. Peter’s Square at the Vatican Sept. 15, 2019. (CNS photo/Vatican Media)

“How do you conquer evil? By welcoming God’s forgiveness and the forgiveness of one’s brothers and sisters,” the pope said Sept. 15 during his Sunday Angelus address.

With confession, God forgives and takes away the sin, “making us new inside and that way he makes reborn joy, not sadness, not darkness in the heart, not suspicion, but joy,” he said.

In his address, the pope focused on the Sunday Gospel reading in which Jesus responds to those who criticized his choosing to welcome and eat with sinners.

The pope said Jesus responds with three “stupendous” parables, which everyone should read in the Gospel of St. Luke, chapter 15, to be reminded of the beauty of God’s love for everyone, but especially for those who do not know him or are unable to open their hearts to him.

In the three parables — the one lost sheep, the lost coin and the prodigal son — God shows that no matter what, “you have a place” in God’s heart and are precious in his eyes, he said.

He will always wait for his sinning children to return home and will welcome and love them like the lost sheep, the pope said.

“Do not be afraid, God loves you, he loves you as you are and he knows that only his love can change your life,” he said.

However, people might still refuse God’s infinite love for them, the pope said. This can happen when someone, like the prodigal son’s brother, feels righteous and believes that evil is found in others, not oneself.

“Let us not believe we are good, because alone, without the help of God, who is good, we do not know how to overcome evil,” he said.

Sometimes people may mistakenly think God is more a master than a father, a God who is more strict and rigid than merciful, a God who conquers evil with force rather than with forgiveness, he said.

“That’s not the way it is. God saves with love, not force, offering himself, not imposing himself,” said Pope Francis.

The pope asked everyone to have courage and understand that, “with God, no sin will have the last word.”

NEXT: Papal commission for protection of minors meets again in Rome