God loves, rescues even those in the ‘hell’ of addiction, pope says 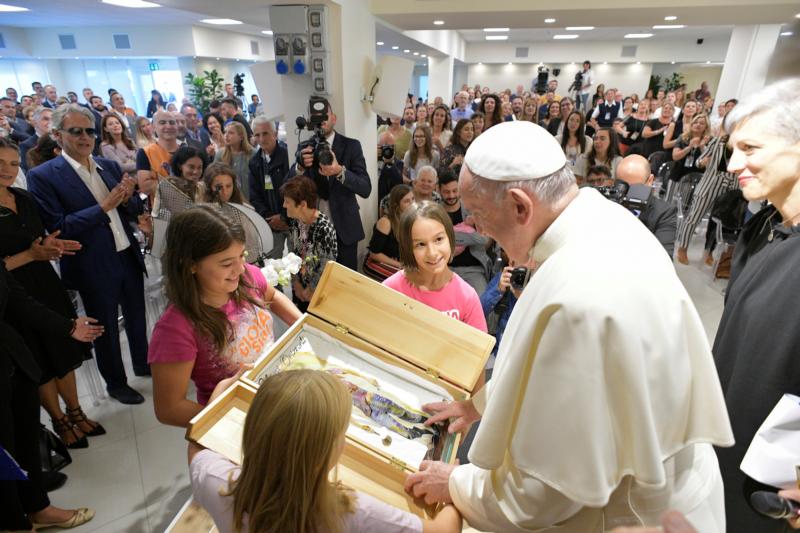 Pope Francis receives a gift from children during a Sept. 24, 2019, visit to Cittadella Cielo (“Heaven’s Citadel”), the headquarters of the New Horizons Community in Frosinone, Italy. The community is a lay movement that engages in evangelization and service to the disadvantaged, including young people dealing with addiction. (CNS photo/Vatican Media via Reuters)

VATICAN CITY (CNS) — Pope Francis slipped out of the Vatican Sept. 24 to spend the day with members of an Italian lay community, the young people in recovery they assist and tenor Andrea Bocelli.

After listening to three young people’s stories of finding the New Horizons Community and entering recovery, Pope Francis praised them as living witnesses of how God looks with love upon everyone he created.

The freedom God gives each person means there may be success and failure and starting all over again, the pope said. “But he is patient. He has a patient gaze.”

New Horizons Community, a 25-year-old lay movement, focuses on evangelization and concrete assistance to the disadvantaged. The movement’s headquarters is known as the Cittadella Cielo (“Heaven’s Citadel”).

Chiara Amirante, founder of the community, told Vatican News that the pope’s visit was “an unexpected gift from heaven, and we welcomed him with hearts overflowing with joy.”

She also said the pope had sent over food and staples the day before “because he knows that every day there are 120 mouths to feed.”

Bocelli, a longtime supporter of the community, sang during the pope’s meeting with community members and again at the midday Mass the pope celebrated there.

In his Mass homily, Pope Francis said he had read the day’s readings before setting off and knew the reading from Ezra about rebuilding the temple in Jerusalem was perfect for the occasion.

“It’s not easy to rebuild,” he said. And “it’s more difficult repair a life than to raise a child. It’s more difficult,” and not only because of the scars of the past, but also because everyone around is used to the wreckage and some people profit from it.

“The reconstruction of a life is a grace,” he said. “It’s not earned, it’s all grace. But you must defend it with work and with struggle so that the merchants of destruction do not return and make this life a pile of stones.”

The enemies of Jesus “reduced him to ruins on the cross, but his power, the power of God, rebuilt him for us forever,” the pope said. And while temptations will continue to come, those who cling to Jesus can be certain of sharing his victory.

“We cannot rebuild our lives, we cannot keep the temple of our lives standing without Jesus, without trust in Jesus,” he said. “He will help us with this.”

NEXT: Calumny, slander is a ‘diabolical cancer,’ pope says