Guard against doubt, fatigue by being with Christ, pope tells volunteers 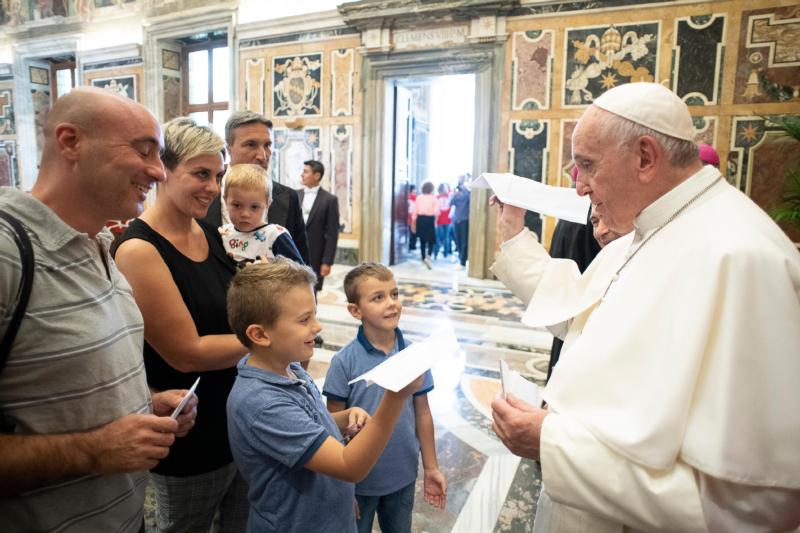 Pope Francis holds a paper airplane children gave him during a meeting at the Vatican Sept. 25, 2019, with members of the Emmanuel Community from Lecce, Italy, who are especially active in serving the poor, the disabled and marginalized. The pope told them they can fight off fatigue and discouragement by being with Christ as they work with so many people in difficulty. (CNS photo/Vatican Media)

VATICAN CITY (CNS) — Pope Francis told volunteers and social workers that they can guard against discouragement by always being with Christ when working with people in difficulty.

Nearly 40 years ago, “your community was founded on Christmas day and it expresses faith incarnated in service,” the pope told those who work with and have been served by the Emmanuel Community in Lecce, Italy.

Founded by Jesuit Father Mario Marafioti, the community welcomes and provides care for hundreds of people, including minors with no family support, migrants and people with addictions or disabilities.

“The Lord knocks on the door with the face of brothers and sisters who live in poverty, abandonment and slavery, and you opened” that door, the pope said in an audience with the group at the Vatican Sept. 26.

He thanked them for the way they welcome, accompany and work with the people they serve, by being rooted in God’s word and moments of reflection and fraternity.

“This is important, otherwise one becomes an aid agency or a business,” he said.

But, “the hardest thing is perseverance, to keep going,” he said, reminding them that the strength and power behind their efforts come from God, not themselves.

Just as Emmanuel means “God with us,” those involved with the Emmanuel Community must follow that path of being both with Christ and with those in difficulty, he said.

“This is the key,” he said; one must always be with both at the same time.

A life of “God with us” and giving witness of God’s love provides the strength needed to not lose hope, joy or the courage of self-sacrifice, he said.

It helps people working in difficult circumstances from hurting each other, helps them pick up the pieces after failure or disappointment and helps them keep working “with joy even if it is exhausting and you feel tired,” he said.

The pope thanked the group for its visit and said, “It is always a gift and consolation for me to meet communities that seek to live the joy of the Gospel. Thank you and have a good journey!”

NEXT: Australian states to have priests report abuse disclosed in confession