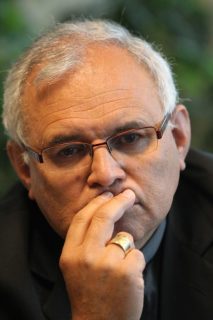 GUATEMALA CITY (CNS) — Despite his work in peripheral dioceses, Cardinal-designate Alvaro Ramazzini Imeri of Huehuetenango has been heard throughout the country.

“He’s worked closely with the poor. He’s worked in rural sectors of (his) dioceses, areas which are mostly indigenous … with very impoverished people, who have been persecuted,” said Nery Rodenas, director of the Archdiocese of Guatemala’s human rights office. “He’s done work in favor of the poor in a very consistent way.”

The cardinal-designate, 72, has developed a reputation for denouncing injustices, including extractive activities in areas populated by indigenous K’iche and Mam peoples.

His work has brought acclaim: People in western Guatemala tried putting him on the ballot as a presidential candidate, an effort he quickly quashed.

But he has suffered death threats for his work. He recently condemned the Guatemalan government signing a safe third country agreement with the United States, meaning asylum-seekers passing through Guatemala would have to return there to file their claims. The cardinal-designate also criticized attacks on an international anti-impunity commission known as the CICIG, which concluded its work in September, but, for a time, caused discomfort for those in the political class and elites accused of corruption.

“His main characteristic is being a bishop who, in addition to preaching the Gospel, also denounces all those that oppose the plan of God … when it denigrates the person,” Rodenas said. “He’s had many people try to discredit him, people who see him unfavorably or call him a communist, a socialist without any basis.”

His elevation as cardinal, Rodenas added, “turns our eyes toward the rural areas of Guatemala.”

Pope Francis’ announcement that he would make Bishop Ramazzini a cardinal came Sept. 1, the same day the cardinal-designate addressed his county’s migration toward the north. The outward migration in Huehuetenango department has been so severe there that nearly 3 percent of the population headed for the United States between October 2018 and April 2019, acting U.S. Homeland Security Secretary Kevin McAleenan said in May.

The Guatemalan newspaper Prensa Libre reported he said in a homily: “That is the violence of poverty. It hurts because nobody should have to leave this country, which has so much, but is badly distributed.”

He said Guatemalans were “suffering due to the violence of anti-immigrant policies of the current U.S. government … and also those of Barack Obama, who didn’t have the courage to carry out immigration reform.”

Alvaro Ramazzini Imeri was born in Guatemala City July 16, 1947. He earned a doctorate in canon law at the Pontifical Gregorian University in Rome and served as seminary rector in Guatemala City. He was appointed bishop of San Marcos in late 1988 and was transferred to Huehuetenango in 2012.

His work in Huehuetenango has focused on migrants. Observers in Guatemala partially attribute the outflow of migrants to the government abandonment of rural regions of the country, especially in areas such as education, infrastructure and social services. Roughly half of the country’s children are malnourished.

He told reporters he would rate Morales’ administration “10” on a scale of one-to-100, but added: “Perhaps I’m exaggerating. But it’s that I live in an area where we’ve not had development, where people continue migrating to the United States, where the prison system continues being corrupt.”

Supporters say that, as a cardinal, his voice will only get louder, at a time when the elites have moved against potential threats such as the anti-impunity commission.

“They got rid of the CICIG, but the pope made Ramazzini a cardinal,” said Scalabrinian Father Mauro Verzeletti, who established a migrant shelter in San Marcos at the invitation of the cardinal-designate. “The pope has sent a message to those who have maintained this perverse structure in the country, which generates poverty and violence.”

NEXT: Manila bishop urges Filipinos to have children vaccinated against polio