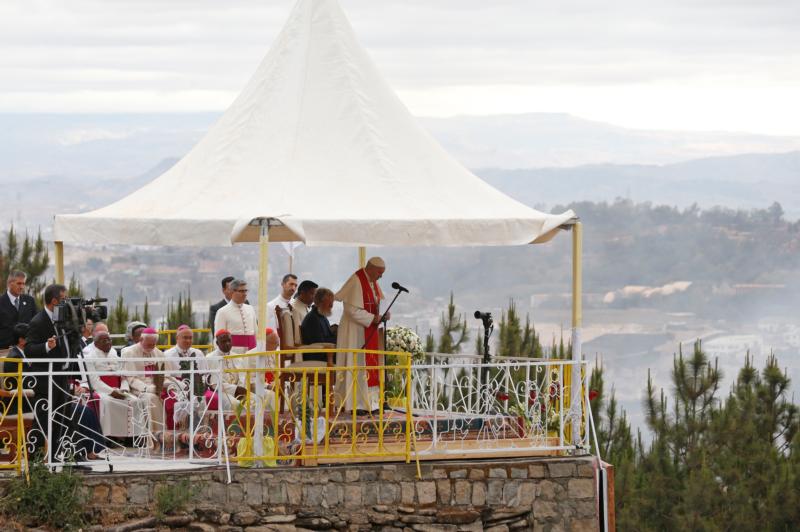 ANTANANARIVO, Madagascar (CNS) — Standing where the phrase “by the sweat of their brow” is a daily reality for hundreds of Madagascar’s poor, Pope Francis prayed for those whose daily bread is earned by hard physical labor and for the unemployed longing to earn a living for their families.

“Before this rock, split by human labor, we pray to you for workers everywhere,” the pope intoned Sept. 8 at the Mahatazana granite quarry on a hill above Antananarivo.

“We pray for those who work with their hands and with immense physical effort: soothe their wearied frames, that they may tenderly caress their children and join in their games,” he continued in the prayer.

The pope had moved up to the quarry after visiting Akamasoa — “The Community of Good Friends” — which was founded by the Argentine Vincentian, Father Pedro Opeka, to provide work, housing, education and health care to some of the country’s poorest people.

Instead of picking through garbage, which is what the families were doing before Father Opeka came along, now some earn a living breaking granite, while others are involved in construction or work for the community or its schools or clinics.

“This had been a place of exclusion, suffering, violence and death,” Father Opeka told Pope Francis, whom he first met 50 years ago in Argentina. Thirty years ago, he continued, “divine providence created an ‘oasis’ of hope where children reacquired their dignity, young people went to school, and parents began working to prepare a future for their children.”

Speaking in the Akamasoa auditorium, Pope Francis said the community and its various activities are a sign of the reality that God lives among the poor, and it is a “tangible sign” of his love for them.

Every corner of Akamasoa, all of its schools and clinics are “a song of hope that refutes and silences any suggestion that some things are ‘inevitable,'” he said. “Let us say it forcefully: poverty is not inevitable.”

“Never stop fighting the disastrous effects of poverty,” he told the younger members of the community. “Never yield to the temptation of settling for an easy life or withdrawing into yourself.”

Pope Francis made it clear that he did not believe the poor wanted pity and handouts but were ready and willing to do hard work and to cultivate discipline, honesty and respect for others.

Then he went to the quarry.

Hanitra Nirina Rasoananahary, 29, one of the quarry workers, told the pope, “our wages are meager, but we are happy to have work. We hope one day there will be more justice for the poor.”

Telling the pope his visit “will help us get up every morning with more courage and strength,” she also told him that chiseling, breaking and moving the stone by hand, “we have made a big hole in the mountain and in the middle of the quarry we erected an altar to thank God for giving us work.”

Rasoananahary told the pope that Father Opeka and the Akamosoa community celebrate Mass in the quarry three times a year — on the feasts of the Ascension, the Assumption and All Saints.

He asked God to protect those who work with their hands and those who desperately search for work. He prayed that parents would not be so exhausted from work that they neglected playing with their children.

He prayed that poor children would be able to go to school and that teachers would receive a living wage so they would not have to seek second jobs.

He prayed for “authentic solidarity” among workers and that they would encourage one another and support one another and work together to “constructively defend their rights.”

The pope also prayed for owners and managers, that they would pay their workers a just wage and ensure them dignified working conditions.

NEXT: Men in Black: Belief in aliens not so far out for some Catholics