Help the poor, protect the environment, pope says in Madagascar 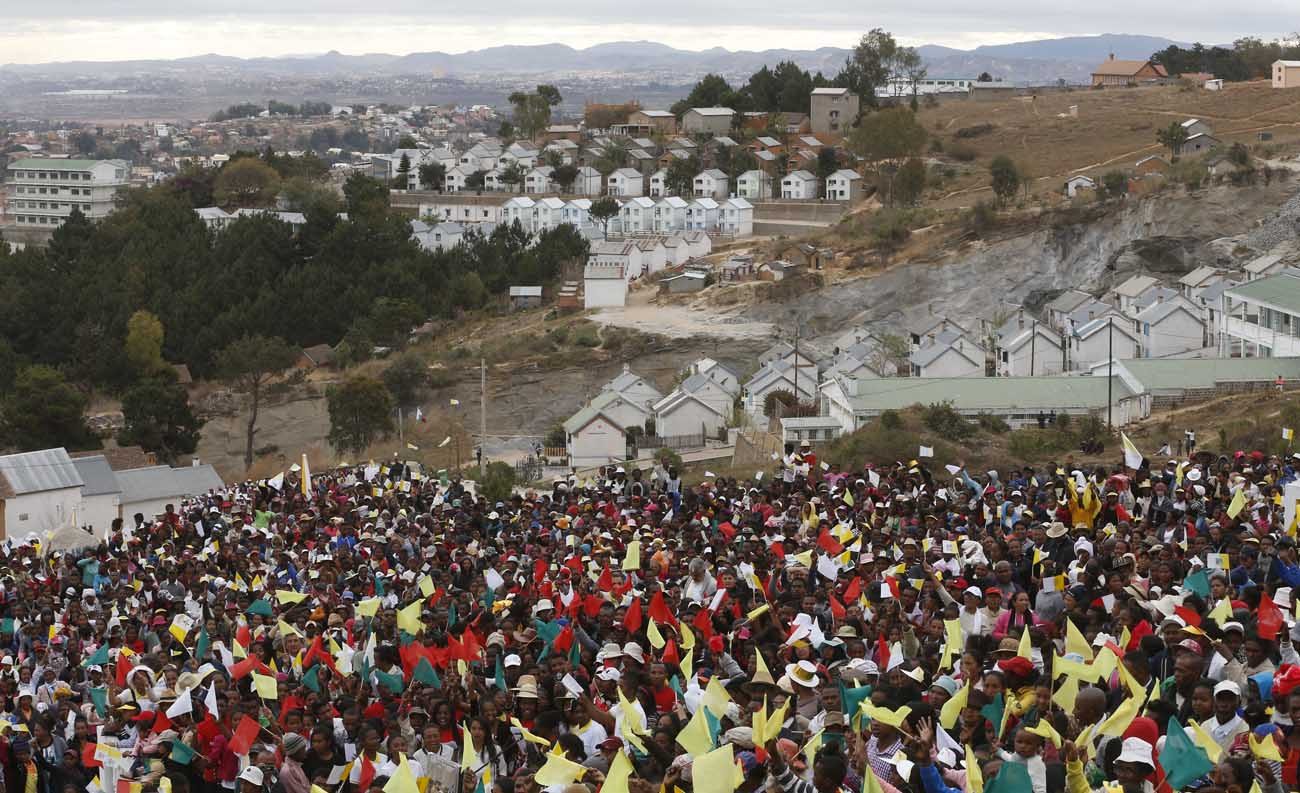 ANTANANARIVO, Madagascar (CNS) — In Madagascar, where the destruction of the environment and the suffering of the poor are inextricably bound, Pope Francis urged government officials to promote development projects that protect nature.

The crisis facing the island nation in the Indian Ocean is “both social and environmental,” the pope said Sept. 7 as he met President Andry Rajoelina, other government officials, diplomats serving in Madagascar and representatives of major aid and development agencies.

Immediately after making their speeches, the pope and president went outside the Ceremony Building and planted a baobab tree, a symbol of the island.

Although rich in natural resources, Madagascar is consistently ranked as one of the world’s 10 poorest countries. According to the World Bank, 75% of the population lives on less than $1.90 a day.

The country also is challenged by a frightening rate of deforestation as prized rosewood trees are cut down illegally and exported, mainly to China, and as other forest lands are cleared by poor farmers trying to eke out a living.

Phil Boyle, British ambassador to Madagascar, told reporters that perhaps as much as 500,000 acres of forests are lost each year. Without serious measures to stop the destruction of the forests and to begin planting trees, “then possibly the most unique habitat on earth will be lost.”

Pope Francis told the politicians and ambassadors, “We cannot speak of integral development without showing consideration and care for our common home,” which means that a way must be found to preserve natural resources, while also investing in education, health care and job creation.

“We are faced not with two separate crises, one environmental and the other social, but rather with one complex crisis which is both social and environmental,” he said, quoting “Laudato Si’,” his encyclical on “integral ecology.”

The pope was plainspoken in his speech, pointing out how “the last forests are menaced by forest fires, poaching (and) the unrestricted cutting down of valuable woodlands. Plant and animal biodiversity is endangered by contraband and illegal exportation,” which benefit the rich and powerful.

At the same time, he acknowledged how, for the poor, “a number of activities harmful to the environment at present ensure their survival. So,” he said, “it is important to create jobs and activities that generate income, while protecting the environment and helping people to emerge from poverty.”

“In a word,” he said, “there can be no true ecological approach or effective efforts to safeguard the environment without the attainment of a social justice capable of respecting the right to the common destination of earth’s goods, not only of present generations, but also of those yet to come.”

After fulfilling the required protocol obligations with the government leaders, Pope Francis went to a Discalced Carmelite monastery to meet about 100 nuns representing the island’s contemplative communities.

The pope gave the sisters a copy of his prepared text, then spoke extemporaneously about the importance of love and concern within religious communities, pointing particularly to the life of St. Therese of Lisieux as a model.

But then he began speaking about how the grill that separates cloistered nuns from the outside world does not always protect them either from “worldliness” or from those who want to harm them.

“Always transparency!” the pope said, telling the sisters that if they are troubled by someone who wants to “disturb your tranquility,” including if it is their spiritual director, they should tell their superior. The pope was not more specific.

NEXT: Change the world, don’t just gripe about it, pope tells young people