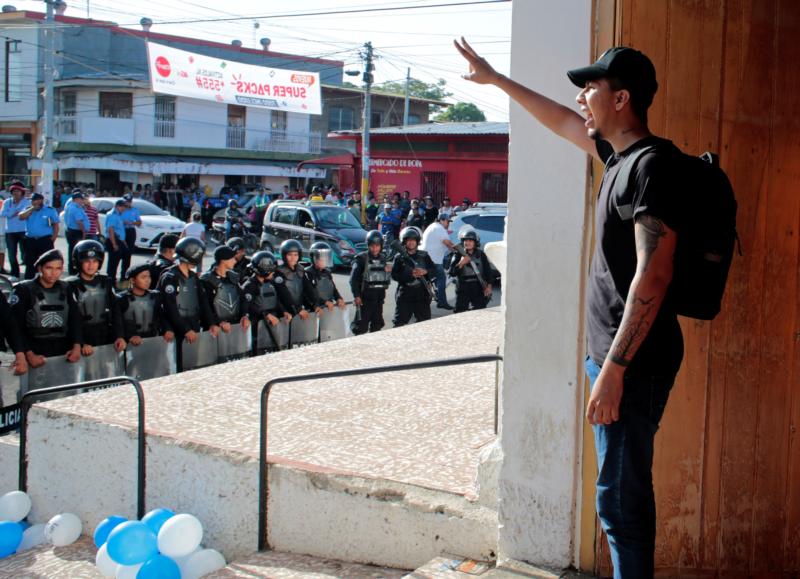 A demonstrator in Managua, Nicaragua, shouts at riot police officers Aug. 28, 2019, during a religious service for the release of political prisoners. Bishops there urged unity and dialogue Sept. 15, as the Central American country celebrated its independence. (CNS photo/Oswaldo Rivas, Reuters)

MEXICO CITY (CNS) — Nicaragua’s bishops urged unity, dialogue and a willingness to overcome a “crisis of trust” as the Central American country celebrated its independence.

Independence Day, Sept. 15, came as many Nicaraguans opposing tyrannical rule continue to be cowed into silence, and the Catholic Church, which has lent spiritual support to protesters and opened its parishes to protect them, suffers state-sponsored harassment.

In a nine-page letter issued Sept. 15 and signed by Cardinal Leopoldo Brenes Solorzano of Managua and seven other bishops, the Nicaraguan bishops’ conference lamented “a crisis of trust, which has transformed our Nicaragua, an omnipresent virus, which infects all of our relations. This is reprehensible.”

The statement continued: “This same distrust stresses family life, it distances us from our neighbors and creates barriers between groups and sectors. For this reason, the dialogue we need to solve our problems has been interrupted, curtailed and overshadowed. And we even mistrust the feasibility and effectiveness of achieving the necessary agreements.

“It’s impossible to love amid distrust,” it added. “Distrust slices the human fabric and causes the beams supporting the church, country and home to collapse.”

Protests in Nicaragua erupted in early 2018 over a proposed tax to prop up the security system. But protesters quickly demanded the ouster of President Daniel Ortega, who responded with increasing repression and the deployment of police and paramilitaries.

Amid the unrest, the Catholic Church finds itself under fire from Ortega’s supporters and police apparatus, even as it tries to promote peace and champion justice for parishioners suffering persecution.

Ortega has branded Catholics an enemy, accusing the church — which tried unsuccessfully to promote dialogue and find an exit from the crisis — of being “committed to the plan of the coup plotters.”

The bishops acknowledged the plight of the faithful, saying, “It’s difficult to be a Christian Catholic in these conditions, but we exhort you to not stop struggling for the faith.”

They also asked: “Is it possible today in Nicaragua to be Catholic and work for an institution that doesn’t respect your conscience and plays with people’s hunger? How do we forgive the cruelty we’ve been subjected to? Is it possible to heal these wounds?”

Priests have been pummeled in Nicaragua, churches have been shot at and infiltrated and the Jesuit-run Central American University has been surrounded by a security force. Auxiliary Bishop Silvio Jose Baez of Managua, who voiced the anguish of an oppressed population via social media, was called to Rome after having suffered death threats.

Within the past year, the government has blocked the entry of medicine and food aid from Caritas, the church’s charitable aid agency.

The bishops’ letter did not mention Ortega by name, only mentioning “almost a year-and-a-half of suffering and pain we have experienced.” But it said, “We love our homeland” and urged Nicaraguans to build a better country, starting by “caring for” and “utilizing” the country’s “judicial, civic and political institutions” — but also by loving their neighbors.

“The more effectively the neighbor is loved, the more one works for the good of the country. (They) also respond to their real needs, having the knowledge to attend to their wounds and incorporate their disagreements. This way we will certainly be able to open up a more demanding and robust democracy.”

In the statement, the bishops called on Nicaraguans to reread the beatitudes, saying, “In them, the protagonists are not the powerful, nor the rich. … The protagonists are the poor, the afflicted, the dispossessed, those who have a hunger and thirst for justice, the merciful, the pure of heart and those who work for peace.”

The bishops also said, “We dream of a country in which we rediscover freedom in our personal and institutional relations. … We dream of a reconciled country. We dream of a hopeful country.”

NEXT: Religion has ‘valuable role’ in forming culture of peace, says U.N. nuncio