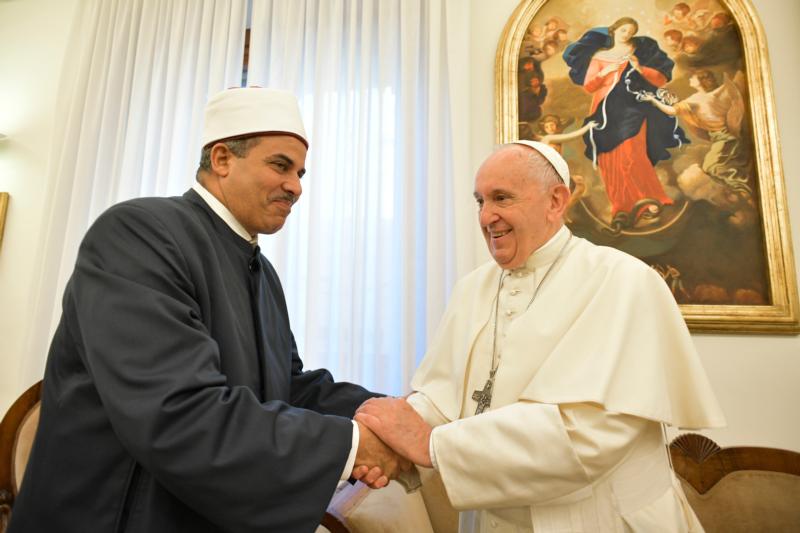 Pope Francis shakes greets Mohamed Husin Abdelaziz Hassan, president of al-Azhar University, during a Sept. 11, 2019, meeting at the Vatican. The pope met with the committee working to fulfill the goals of the “Document on Human Fraternity for World Peace and Living Together.” (CNS photo/Vatican Media)

VATICAN CITY (CNS) — On a day remembered for the terrorist attacks against the United States, Pope Francis met with members of a committee of Muslim leaders and Vatican officials promoting a new era of dialogue and world peace.

The first meeting of the committee working to fulfill the goals of the “Document on Human Fraternity for World Peace and Living Together” was held Sept. 11 in the Vatican residence where the pope lives.

“The date was chosen as a sign of the will to build life and fraternity where others sowed death and destruction,” said a communique by the Vatican press office Sept. 11.

The Document on Human Fraternity for World Peace and Living Together — which rejects violence and terrorism and promotes identity, dialogue and harmony — was signed in the United Arab Emirates Feb. 4 by Pope Francis and Egyptian Sheikh Ahmad el-Tayeb, grand imam of al-Azhar, a leading authority for many Sunni Muslims.

The seven-person committee is made up of representatives for the Vatican, al-Azhar University and the United Arab Emirates.

The pope greeted each member and gave them a special copy of the document, issued by the Vatican Library.

Calling them “artisans of fraternity,” the pope thanked them and encouraged them to be the source of a new form of politics of “not only of outstretched hands, but of open hearts,” the communique said.

During the committee’s meeting, which the pope did not attend, the members agreed to invite representatives of other religions to be part of the committee, and they made a proposal to ask the United Nations to proclaim a World Day of Human Fraternity, to be celebrated between Feb. 3 and 5.

When the meeting ended, “each member prayed according to his own faith for the victims of Sept. 11 and of every act of terrorism,” the Vatican statement said.