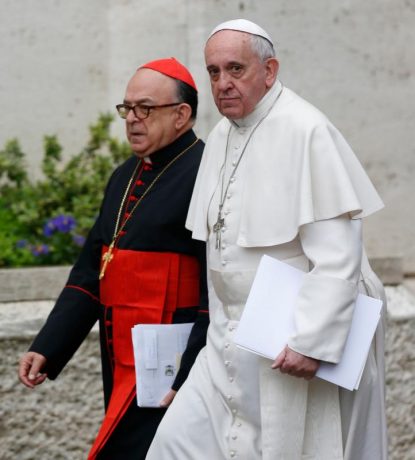 Pope Francis and Cardinal Raymundo Damasceno Assis of Aparecida, Brazil, walk to a meeting of cardinals in the synod hall at the Vatican Feb. 20, 2014. In a statement released by the Vatican Sept. 28, 2019, the pope named Cardinal Damasceno as pontifical commissioner of the Heralds of the Gospel and its religious branches for consecrated men and women. (CNS photo/Paul Haring)

In a statement released by the Vatican Sept. 28, the pope named retired Cardinal Raymundo Damasceno Assis of Aparecida as pontifical commissioner of the Heralds of the Gospel and its religious branches for consecrated men and women.

Established in 1999 by Msgr. Joao Scognamiglio Cla Dias, the Heralds of the Gospel is an offshoot of the Brazilian Society for the Defense of Tradition, Family and Property, also known as TFP.

TFP was a traditionalist Catholic political movement founded by Plinio Correa de Oliveira, a right-wing activist whom the Brazilian priest considered a friend and mentor.

After de Oliveira’s death in 1995, a legal dispute arose over ownership of the group; ultimately, Msgr. Cla Dias won and founded the Heralds of the Gospel.

Recognized by the Vatican as an international association of the faithful of pontifical right in 2001, the association and its branches for consecrated men and women, known as Virgo Flos Carmeli and Regina Virginum respectively, has people in more than 70 countries.

However, controversy arose in 2017 when a video of a meeting between Msgr. Cla Dias and 60 priests of the religious association was made public.

In the video, a priest standing next to the founder read several claims made by a demon during an exorcism, claiming that “the Vatican is mine” and foretelling the death of Pope Francis, causing some in the group, including Msgr. Cla Dias, to laugh.

Other videos released on the web revealed practices by the Heralds of the Gospel not included in the Catholic Church’s Rite of Exorcism, including the use of the names of de Oliveira; his mother, Donna Lucilla; and Msgr. Cla Dias to drive out demons and physical abuse against people allegedly possessed.

Shortly after the video’s publishing, the Vatican announced an apostolic visitation, and Msgr. Cla Dias said he would resign as the group’s superior general.

However, in a June 2017 letter announcing his resignation, Msgr. Cla Dias said he would not “renounce my mission as father” of the group and would continue “to intercede next to God” as the “living model and guardian of this charism, entrusted to me by the Holy Spirit.”

The Vatican said Sept. 28 that the reason for the apostolic visitation in 2017 was due to “shortcomings concerning the style of government, the life of the members of the council, the pastoral care of vocations, the formation of new vocations, administration, the management of works and fundraising.”

The decision to appoint a commissioner, the Vatican said, “should not be considered a punishment, but an initiative intended for the good of the association, and an attempt to resolve existing problems.”

NEXT: Three new dioceses carved out of Archdiocese of Mexico