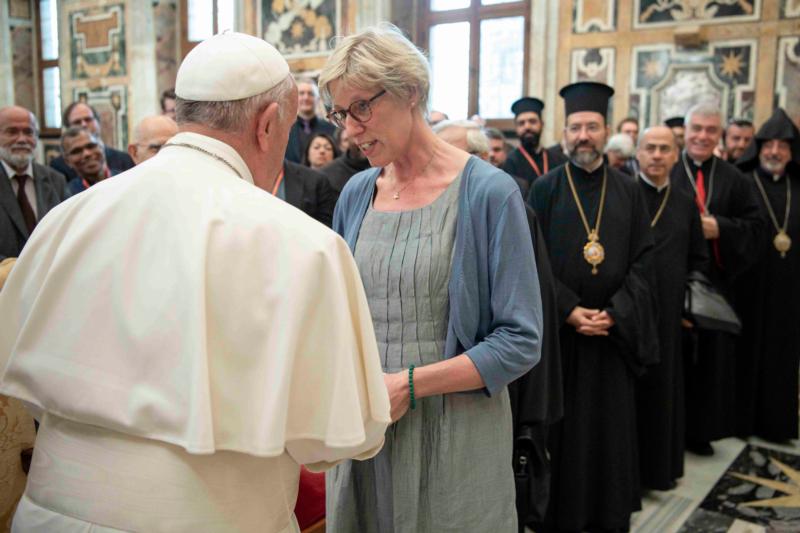 Pope Francis greets Astrid Kaptijn, a professor of canon law and president of the Society for the Law of the Eastern Churches, Sept. 19, 2019, during an audience in the Clementine Hall of the Apostolic Palace at the Vatican. (CNS photo/Vatican Media)

VATICAN CITY (CNS) — The search for Christian unity must involve all aspects of the churches’ lives, including their different church laws, Pope Francis said.

“Canon law is essential for ecumenical dialogue,” the pope told members of the Society for the Law of the Eastern Churches, which is made up mostly of canon lawyers from the Orthodox, Oriental Orthodox and Eastern Catholic churches.

The Catholic-Orthodox and Catholic-Oriental Orthodox theological dialogues, the pope said, focus in great part on ecclesiology, the theological understanding of what the church is and how its structure reflects its identity.

Pope Francis said that focus means the dialogues “have a canonical dimension, too, since ecclesiology finds expression in the institutions and the law of the churches. It is clear, therefore, that canon law is not only an aid to ecumenical dialogue, but also an essential dimension.”

The formal Catholic-Orthodox dialogue, for example, hopes to discuss ways that the bishop of Rome — that is, the pope — could exercise his primacy for the benefit of all in a reunited church. The dialogue members are laying the groundwork for those discussions by looking at what Pope Francis called “the common canonical heritage of the first millennium” when East and West were still in full communion.

While the dialogue benefits from the study of canon law, he said, canon law also can benefit from the ecumenical dialogue by seeing how other churches operate and strive to have their law reflect their Christian identity, faith, spirituality and traditions.

As an example, Pope Francis pointed to his efforts to foster a more “synodal church,” one marked by a process of listening to everyone and involving all members of the church in accordance with their specific role.

“When translated into established institutions and procedures of the church,” he said, “synodality expresses the ecumenical dimension of canon law,” because the synod structure has been part of church governance in the Orthodox and Oriental Orthodox churches for centuries.

While the joint search for Christian unity does not require “the mutual acceptance of the doctrinal and canonical ideas of the interlocutor,” he said, it does require meeting “in a spirit of love, mutual respect and understanding, even exploring new and sometimes unprecedented questions and concerns.”

The search for Christian unity is a search for truth, the patriarch said. But reaching that truth requires real commitment and “resistance to historic evils such as fanaticism, intolerance and fundamentalism.”

In a joint search for truth, Patriarch Bartholomew said, both sides must set aside pride and be willing to learn and to accept criticism. In the end, he said, ecumenical dialogue is destined “to reunite the common fundamental canonical principles of the Christian faith and spirituality not for its own benefit but for the world.”