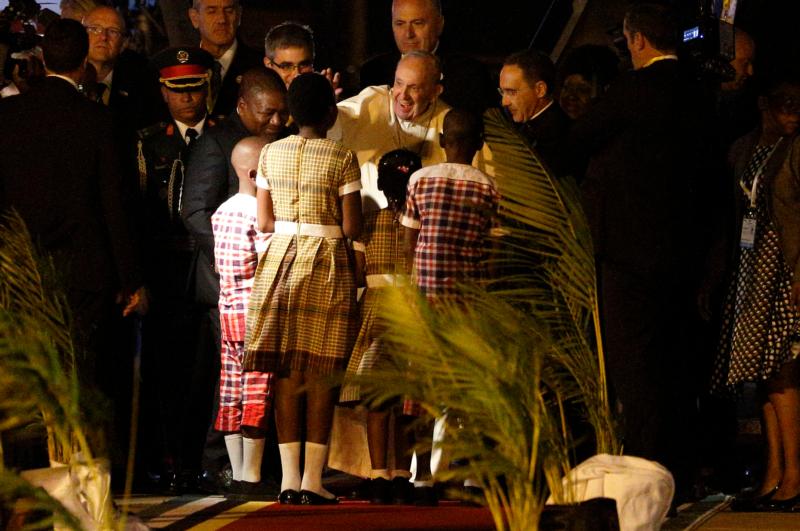 Pope Francis is pictured with Mozambican President Filipe Nyusi as he greets children at the airport in Maputo, Mozambique, Sept. 4, 2019. The pope also will visit Madagascar and Mauritius on his sixth foreign trip of 2019. (CNS photo/Paul Haring)

Mozambican President Filipe Nyusi and two children offering flowers welcomed Pope Francis as he stepped off the plane after a flight of just over 10 hours.

The sun had already set as the pope’s plane made its final approach. The official portion of the welcome ceremony was brief, and there were no speeches.

But several groups of dancers and drummers began their numbers when the pope was walking to the popemobile, and women in the crowd began ululating, so he paused to watch and wave encouragement.

Some of the dancers were dressed traditionally — grass skirts and leopard-print costumes predominated — but one group wore white T-shirts, white shorts and white tennis shoes.

Young men played the “xigovia,” a traditional woodwind instrument made from a gourd; its sound was similar to that of a kazoo.

Thousands and thousands of people lined the streets from the airport to the apostolic nunciature where the pope was staying. Most stood in the dark unless they were at an intersection, which is where streetlights are more common.

As is customary during the flight from Rome, he greeted members of the media traveling with him and thanked them for the work they would do over the next week as he visited Mozambique, Madagascar and Mauritius.

Pope Francis also asked the reporters to keep in their prayers the people of the Bahamas and others in the path of Hurricane Dorian.

Landing in Maputo after such a long flight, Pope Francis was not scheduled to make his first speech until the next morning.

In separate video messages aired in each of the three countries before the pope arrived, he gave a sense of his focus, which included an appreciation of the religious and cultural diversity present within each nation and praise for the strength and good works of the Catholic communities.

In Mozambique, he said, he would pray for a consolidation of peace and reconciliation, a process that continues even though the civil war ended in 1992; after contested election results, violence broke out in 2013-14, and tensions continued until a new peace agreement was signed Aug. 1, just four weeks before the pope’s arrival.

The pope’s video message to the people of Madagascar focused on the island’s natural beauty and unique flora and fauna, but also on the poverty of its people and the relationship of that poverty to deforestation and other damage to the environment.

In Mauritius, the religious and cultural diversity is especially marked: About 68 percent of the island’s people have an Indian or Pakistani heritage; 27 percent are Creole; and 3 percent are of Chinese descent. About 28 percent of the population is Catholic.

“The Catholic Church, from the beginning, was sent to all peoples and speaks all the languages of the world,” the pope said in his message to the Mauritians. “But, you know, the language of the Gospel is love. May the Lord, through the intercession of the Virgin Mary, allow me to proclaim the Gospel with the strength of the Holy Spirit so that all may understand and accept it.”

NEXT: Pope tells French reporter he’s honored by attacks on his ministry