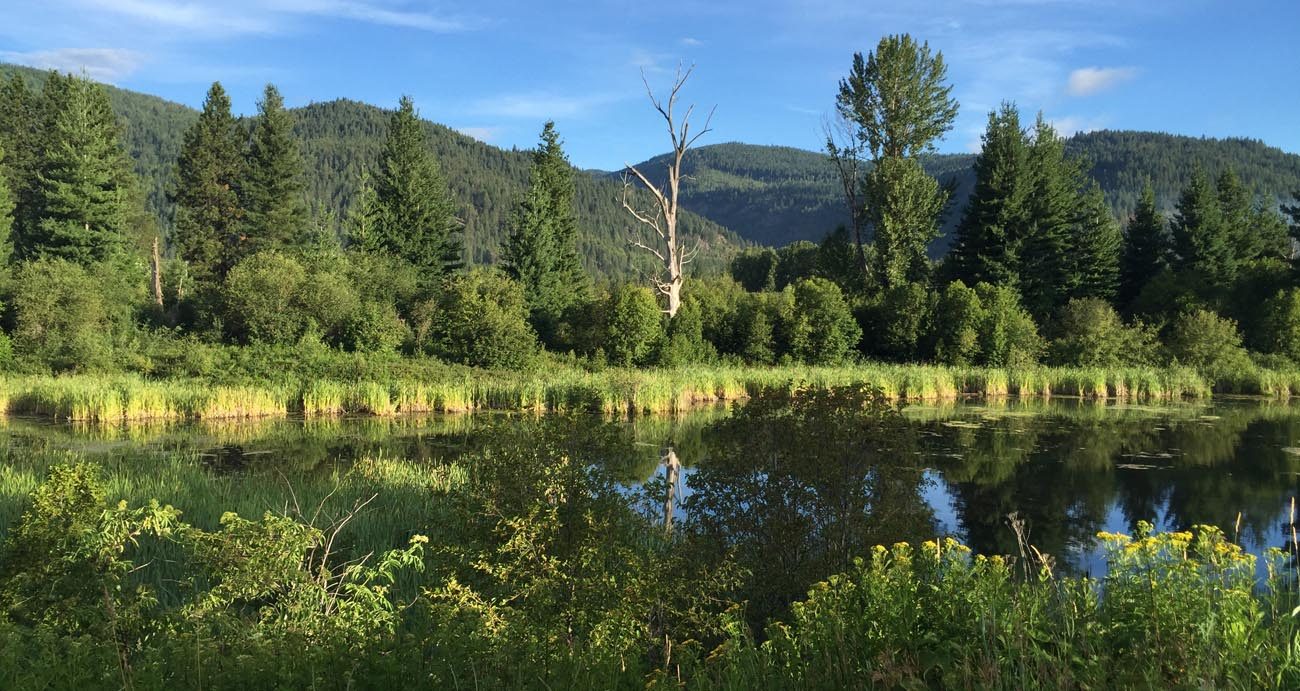 A pond and mountains are seen north of Sandpoint, Idaho, July 11. Pope Francis has proposed adding the care of creation to the traditional list of corporal and spiritual works of mercy. (CNS photo/Cindy Wooden)

VATICAN CITY (CNS) — “Now is the time to abandon our dependence on fossil fuels and move, quickly and decisively, toward forms of clean energy,” Pope Francis said as he marked the World Day of Prayer for the Care of Creation.

“We have caused a climate emergency that gravely threatens nature and life itself, including our own,” the pope said in his message for the Sept. 1 ecumenical day of prayer.

Pope Francis urged Catholics to find a naturally beautiful place and think about how God created the universe and declared it good; then he created human beings and gave them creation “as a precious gift” to safeguard.

“Tragically, the human response to this gift has marked by sin,” he said. Selfishness and self-interest have turned creation, which was meant to be a place of encounter and sharing, into “an area of competition and conflict.”

People have forgotten that they, too, are God’s creation and not lords of the universe free to exploit anything they want, the pope said.

Pollution, the incessant use of fossil fuels, deforestation and intensive farming are causing global temperatures to rise and already threaten the lives of the world’s poorest people, he said. Melting glaciers, a lack of clean drinking water, the development of more frequent super storms and “the considerable presence of plastics and microplastics in the oceans” are signs of how human greed is making the planet increasingly hostile to life.

“We have forgotten who we are: creatures made in the image of God, called to dwell as brothers and sisters in a common home,” Pope Francis said.

Pope Francis suggested Catholics join the ecumenical “Season of Creation” initiative, which runs from the Sept. 1 day of prayer through the feast of St. Francis of Assisi, Oct. 4. The initiative, explained at www.seasonofcreation.org, includes prayer and practical action to clean up the environment, promote recycling and lobby governments for action to mitigate climate change.

In silence and prayer, he said, people should recognize the beauty that God has created and given to all people, but they also should pause to consider how the choices they make about what to eat, what to buy, how to travel and how they use energy and water impact God’s creation, including other people.

Pope Francis asked Catholics to listen especially to young people who are calling on everyone to make “courageous decisions” and undertake “prophetic actions” to fulfill longstanding promises to stop polluting the environment and to protect all life.

Politicians and government leaders also should be included in people’s prayers, he said, pointing particularly to world leaders, who must make real commitments “for directing the planet toward life, not death.”

The United Nations’ Climate Action Summit Sept. 23 will be especially important for reconfirming the Paris Climate Accord and taking “drastic measures” to end greenhouse gas emissions and slow global warming.

“Let us choose life,” the pope said. “Let us say ‘no’ to consumerist greed and to the illusion of omnipotence, for these are the ways of death.”

“May God, the lover of life, grant us the courage to do good without waiting for someone else to begin or until it is too late,” he prayed.

PREVIOUS: Nigerian bishop condemns killing of priest who had worked for peace