Solidarity, not poverty, is God’s plan, pope says in Madagascar 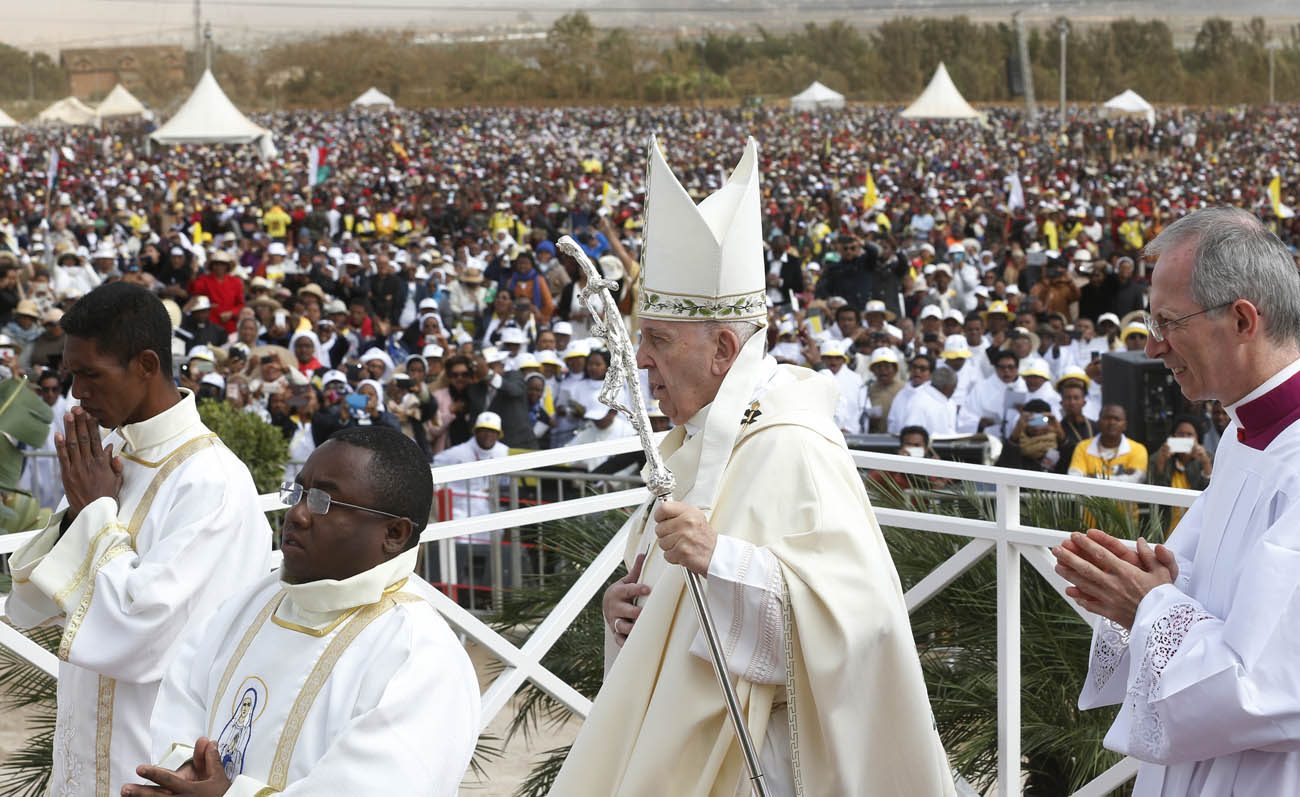 ANTANANARIVO, Madagascar (CNS) — God’s plan for humanity involves community, mutual support, sharing and caring for each other and for the earth, Pope Francis said.

“As we look around us, how many men and women, young people and children are suffering and in utter need. This is not part of God’s plan,” he said Sept. 8, celebrating Mass on a dusty, red dirt field on the outskirts of Antananarivo.

Madagascar is one of the world’s 10 poorest countries. According to the World Bank, 75% of the population lives on less than $1.90 a day.

Close to 1 million people gathered on the Soamandrakizay field for the pope’s Mass, according to local organizers. Many had spent the night, sleeping on straw mats or plastic tarps and bundled up against a windy winter chill.

At the beginning of his homily, the pope acknowledged the sacrifice people made to get to the Mass site and, especially, the discomfort endured by those who camped out.

Madagascan President Andry Rajoelina, a Catholic, and his wife, Mialy, sat near the front of the crowd as Pope Francis preached about the Gospel call to solidarity and the joy that comes from putting faith before power or possessions.

He urged the nation’s people “to make your beautiful country a place where the Gospel becomes life and where life is for the greater glory of God.”

The Sunday Gospel reading from Luke included the line: “If anyone comes to me without hating his father and mother, wife and children, brothers and sisters, and even his own life, he cannot be my disciple.”

Pope Francis said Jesus was explaining that “bonds of blood or membership in a particular group, clan or particular culture” have no bearing on who is blessed, whose dignity should be honored or who, finally, will enter heaven.

“When ‘family’ becomes the decisive criterion for what we consider right and good,” he said, “we end up justifying and even ‘consecrating’ practices that lead to the culture of privilege and exclusion: favoritism, patronage and, as a consequence, corruption.”

The Gospel passage also condemns any ideology that would “abuse the name of God or of religion to justify acts of violence, segregation and even murder, exile, terrorism and marginalization.”

Jesus’ teaching emphasized that “one of the worst forms of enslavement” is “living only for oneself,” the pope said. People who focus only on themselves might feel safe for a while, but they end up “becoming bitter, grumbling, without life.”

What God wants, he said, is for people to extend a helping hand to others and to let them know that they are loved by God and have a dignity that cannot be taken away and should not be attacked.

The Gospel calls Christians to work for social justice, Pope Francis said. “Together we can resist all those forms of idolatry that make us think only of the deceptive securities of power, career, money and of the search for human glory.”

NEXT: Text of pope’s prayer for workers at Madagascar stone quarry