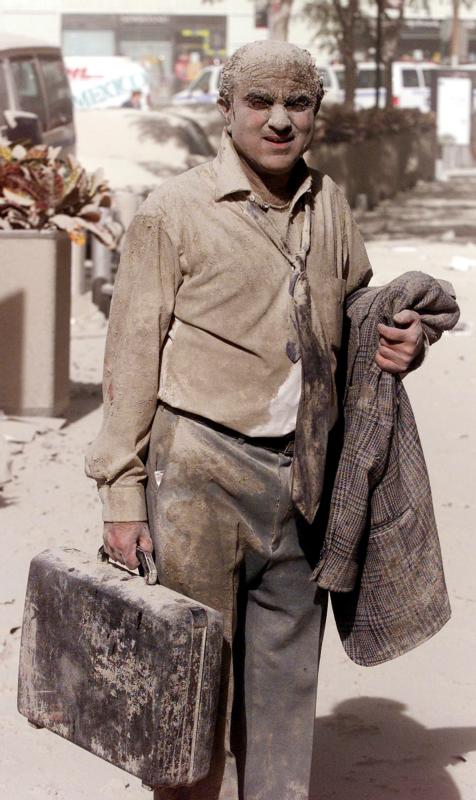 A man covered with ash walks on a street following the collapse of the World Trade Center towers in New York in this Sept. 11, 2001, file photo. (CNS photo/Shannon Stapleton, Reuters)

UNITED NATIONS (CNS) — “The cycle of violence” that surrounded the 9/11 terror attacks shows how destructive violence can be, said Archbishop Bernardito Auza, the Vatican’s permanent observer to the U.N.

“The 9/11 attacks were preceded and followed by many horrendous acts of violence, proving that violence begets more violence, hatred begets more hatred, and revenge perpetuates the cycle of violence,” Archbishop Auza said Sept. 11, the 18th anniversary of the attacks, at an event sponsored by the Global Movement for the Culture of Peace and Pax Christi International.

“There must be a way to stop the cycle of violence, restore the rule of law and build peaceful societies,” he added at the event, “Be Peace: Pathways Toward a Culture of Peace.” “We have institutions to govern us and implement the law. But they are never enough to stop violence, much less to build a culture of peace.”

Archbishop Auza suggested that even some of the U.N.’s signature mission and achievements are not enough.

“We have treaties and conventions on human rights to oblige us to respect the rights of others. We have the Universal Declaration of Human Rights, resolutions and political declarations to educate us about human dignity and urge us to build a culture of peace,” he said. “But they have not been and are not enough to stop violence and restore harmony.”

Archbishop Auza added, “There are so many means of destruction and instruments of violence readily available, easily usable and continuously perfected. They can kill all of us many times over. And others, more powerful still, are each day being invented.

“To render these instruments of death and destruction useless — and, should I say, ridiculous — we need a peaceful heart; a heart that hates war and loves peace,” he said.

Archbishop Auza quoted Isaiah 2:4 when he said a peaceful heart can “move the peoples of the world to ‘beat their swords into plowshares and their spears into pruning hooks,’ so that they may never again ‘lift up sword’ against one another, nor ‘shall they train for war again.'”

The archbishop recalled Pope Francis’ 2015 visit to ground zero in New York City as part of his 2015 U.S. visit, as well as the pope’s predecessor, Pope Benedict XVI, visiting the same site, where the World Trade Center once stood, during a 2008 U.S. visit.

Archbishop Auza quoted remarks Pope Francis made four years ago during a prayer service at the lowest level of the 9/11 memorial: “Here grief is palpable. The water we see flowing toward that empty pit reminds us of all those lives which fell prey to those who think that destruction, tearing down, is the only way to settle conflicts.”

During his visit, Pope Benedict prayed, “Give us the wisdom and courage to work tirelessly for a world where true peace and love reign among nations and in the hearts of all.”

The 9/11 anniversary, Archbishop Auza said, is “a stark reminder why we must never stop insisting on the inestimable value of peace, and a tragic demonstration that we have not done enough to build a culture of peace and a civilization of mutual respect.”