Matt Talbot: An old friend on the modern journey to recovery 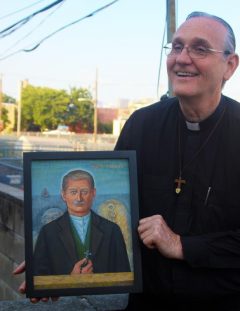 After 30 years of drug and alcohol abuse, Pat — a Philadelphia native with tattooed arms and a Rocky Balboa accent — made an unlikely new friend: Matt Talbot, an Irish laborer who’d been dead for about a century.

“I’d never heard of him until I got sober,” said Pat, now a member of the Calix Society, a Catholic support group for those in addiction recovery.

During a Calix meeting that Pat attended after getting clean, the group’s national chaplain, Father Douglas McKay, showed a film on Talbot, who had battled the bottle throughout adolescence and early adulthood.

After taking an abstinence pledge at age 28, Talbot remained sober for decades until his death in 1925, living a quiet, ascetic life that included daily Mass, prayer, Scripture reading and charitable works.

Collapsing on a Dublin street en route to Mass, Talbot was discovered to have regularly worn penitential chains. Declared “venerable” by Pope Paul VI in 1975, Talbot is now invoked as an intercessor by a number of groups that minister to those suffering from addiction, including the Calix Society, which was founded in the U.S. some 20 years after Talbot’s death.

During his August 2018 visit to Ireland, Pope Francis stopped at Our Lady of Lourdes Church in Dublin to pray before several relics of Talbot, whose tomb is just feet from the church’s altar.

For Pat, learning about Talbot was life-changing, and he began praying to the would-be saint, whose intercession he also credits for his healing from an intestinal rupture that required 14 hours of emergency surgery.

After his hospitalization, Pat attended a Matt Talbot-themed retreat, where he was able to release many of the resentments that had fueled his addiction.

“I found forgiveness not only for myself, but for the people who had molested me as a child, and for anybody that had ever hurt me,” he said. “I finally saw everyone as being worthy of God’s love.”

Longtime Calix member Kathy Diering said that Talbot, in his resolute example of holiness, “speaks volumes without even speaking.”

“When you look at his hiddenness, his spirituality, you see that he really knew that the body and blood of Christ were his true source of life,” she said. “He was steadfast, and that’s been an inspiration for me, because he shows what is possible.”

Talbot’s conversion from sot to saint, made all the more dramatic by the severity of his alcoholism, resonates with those looking to free themselves from addiction. In fact, many of those devoted to Matt Talbot say that his sanctity was the real key to his sobriety.

“He knew that everyone else might leave him, but God wouldn’t,” said Diering. “And that’s where his strength was.”

Holiness is a sign of authentic recovery from addiction, said Father McKay, who is looking to create a national shrine to Matt Talbot in Philadelphia. While addiction is a complex disease of body, mind and spirit, he said, too often treatment only focuses on the first two, without addressing the soul’s deep hunger for connection with the divine.

Globally, some 35 million people now struggle with drug addiction, according to the United Nations. A separate study projects that alcohol consumption (which rose 10% between 1990 and 2017) will increase by another 17% worldwide over the next decade.

In the face of such daunting statistics, Talbot’s appeal as a role model and intercessor continues to grow internationally, thanks to the dedicated efforts of those who work to share, online and in person, the Irishman’s message of hope.

From his native Poland, Gregory Jakielski has been diligently spreading devotion to this saint-in-the-making for the past seven years, maintaining both a website and Facebook page that feature a number of Matt Talbot resources. In August 2018, he collected hundreds of names that were placed by a pilgrim on Matt Talbot’s tomb in Dublin.

“These seven years have passed like one day,” Jakielski wrote on Facebook Aug. 26, asking for the “strength and resources” to continue his mission.

For Pat, Matt Talbot’s simplicity makes clear the path to both sobriety and sanctity.

“He had no real possessions,” he said. “He didn’t need anything but God’s love, and he wanted to make others feel that too.”

PREVIOUS: The Spirit of God is beating on the doors of our hearts

NEXT: Spiritual support on the road to recovery from addiction