Spiritual support on the road to recovery from addiction 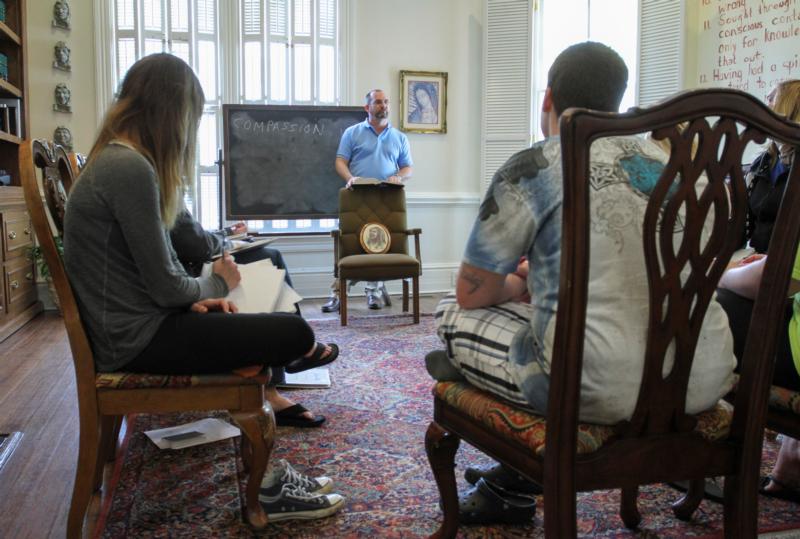 Counselor Andy Martin leads an afternoon group session at GraceWay in Albany, Ga. GraceWay is a home for women working to overcome an addiction. Building a relationship with God is a key part of recovery. (CNS photo/Michael Alexander, Georgia Bulletin)

Pope Francis described the church as a “field hospital,” and Father Thomas Hoar, who has worked with individuals with addiction at St. Edmund’s Retreat in Connecticut since 1993, says this is an apt description for working with those in recovery from addiction.

“Our work as a church is providing for the needs of the broken,” he said.

Father Hoar, a member of the religious order the Society of St. Edmund, is the president of the retreat center, located on Enders Island, an 11-acre haven with breathtaking Atlantic vistas near the town of Mystic.

This last ministry is unusual, but needed, said Father Hoar.

“College life is very hostile to recovery,” he said, adding that over 130 colleges and universities have begun to address the issue through collegiate recovery programs.

St. Edmund’s houses 12 young men at a time from a variety of backgrounds who have completed treatment.

“Detox and rehab is one thing,” said Father Hoar. “But recovery is a long journey. We have men who work with tutors, attend community college, repair their academic records. We show them what they can achieve.”

Success stories abound. One man, recovering from a heroin addiction, spent three years at the residence and is now a student at Columbia University.

In an era when the opioid crisis has placed addiction squarely in the national spotlight, Father Hoar emphasizes that faith is a vital component of recovery.

Although the collegiate program is open to people of all faiths or none, each resident attends daily Mass and is surrounded by a Catholic atmosphere.

“People with long-term sobriety have to have a spiritual life,” the priest asserted, even though that may look different for each person.

“A lot of people have the position that ‘I want spirituality without religion.’ This is what got you where you are today,” Father Hoar said. “Who is going to guide us? It’s important that we understand God in the context of a worshipping community.”

On the other side of the U.S., Father Tom Weston of the Western province of the Society of Jesus has worked in addiction recovery full time since 1984. Much of his work involves retreats for those in recovery.

“Retreats are important in the Catholic tradition,” said the Jesuit. “Not for detoxing. But once you’re out of the cage of addiction, when you’re done dancing with the gorilla, retreats can be very helpful.”

An advocate of the 12-step program of Alcoholics Anonymous, Father Weston, who talked openly about his own recovery, said 12-step meetings “meet you where you are. If you’re just emerging from the train wreck, they’re right there with you.”

But retreats provide the quiet space that meetings do not, and an intimacy with God that assists an individual’s faith journey on the road to recovery.

“Meetings save lives,” he added, “but retreats have a different vibration, a different energy. Especially when someone has a little time to recover, a retreat provides refreshment, renewal, rest.”

Father Weston gives many retreats on the West Coast, from the Jesuit Retreat Center in Los Altos, California, to Villa Maria del Mar in Santa Cruz, California. But his schedule takes him to retreat centers throughout the U.S. and around the world. You can find retreats for those in recovery at most Jesuit retreat centers.

In the Midwest, St. Gregory Recovery Center outside Des Moines, Iowa, offers rehab treatment, including cognitive behavior therapy and behavior modification training for a variety of addictions including alcohol, methamphetamine, cocaine and opioids.

Philip Leibhart, a community relations liaison for the center, said, “We’re not a 12-step program, but there are fingerprints of the 12-step program in our work. We say we are spiritually based and Catholic inspired. We offer Mass six days a week and the opportunity for the sacrament of reconciliation.”

St. Gregory’s program runs from five to seven weeks. Following treatment, a life coach is assigned to each participant for a year of follow-up contact. They do not discourage participation in follow-up 12-step recovery programs, said Leibhart.

“Whatever works,” he said.

Both Father Weston and Father Hoar describe the 12-step program, developed by recovering alcoholics Bill Wilson and Bob Smith in the mid-20th century, as having faith components in common with the Spiritual Exercise of St. Ignatius Loyola, who lived in the mid-16th century.

Both acknowledge a need to turn lives over to God, or a “higher power” in 12-step parlance. Each calls for an examination of one’s life or “a moral inventory,” and both encourage service to others, or as the 12-steps frames it, “carrying this message to others.”

Father Hoar said many people “short-circuit building a relationship with God,” which is a vital key to recovery.

At St. Edmund’s, something called “11th Step Retreats” are offered. That step contains these words: “Sought through prayer and meditation to improve our conscious contact with God, as we understood him, praying only for knowledge of his will for us and the power to carry that out.”

PREVIOUS: Matt Talbot: An old friend on the modern journey to recovery

NEXT: Addiction recovery is a journey for the soul as well as the body