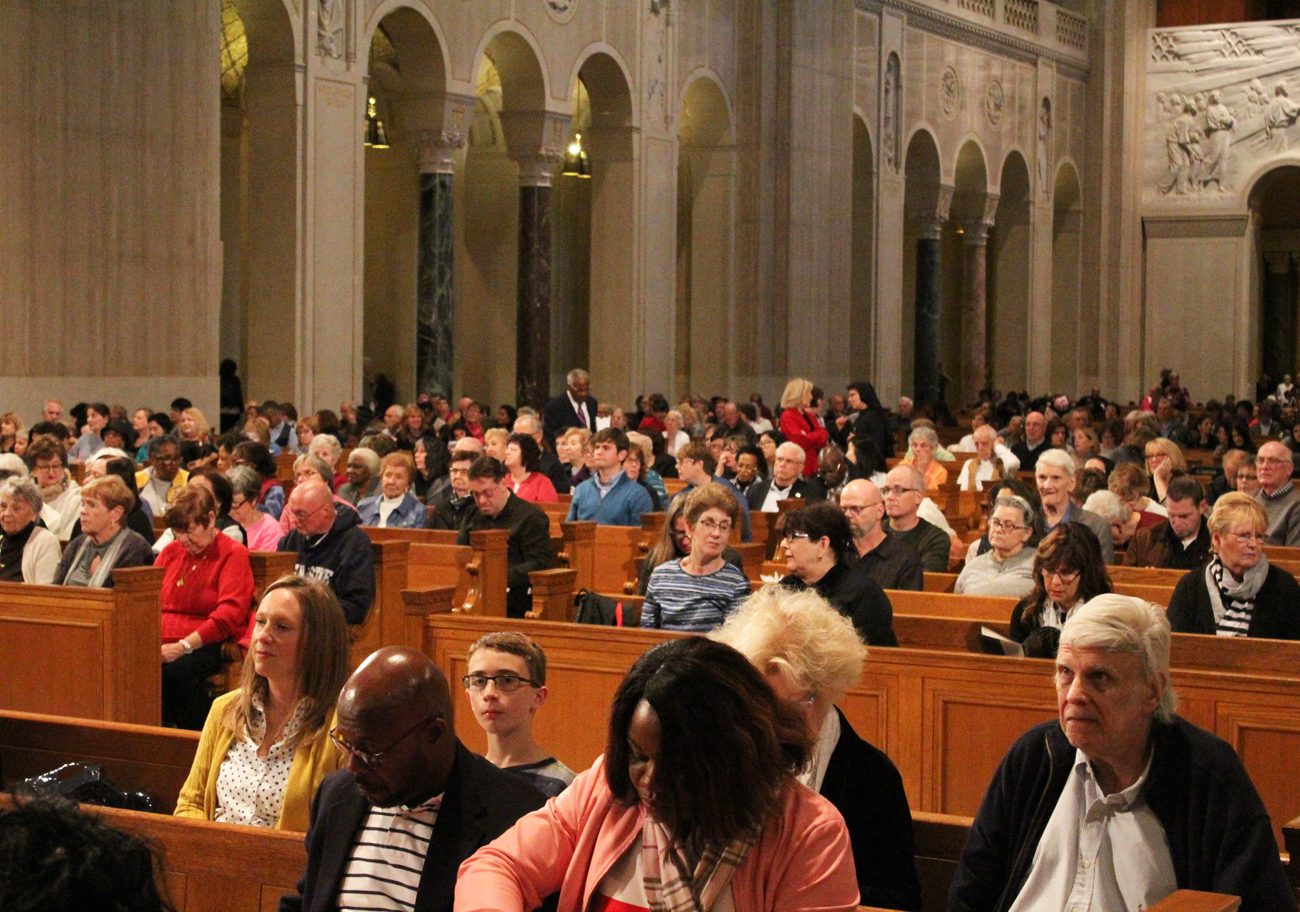 Catholics prepare for the celebration of the closing Mass, celebrated by Archbishop Charles Chaput, Oct. 19 during the Archdiocese of Philadelphia's pilgrimage to the Basilica of the National Shrine of the Immaculate conception in Washington, D.C. (Photo by Matthew Gambino)

Think of it: a couple thousand people in a church and no one looked bored, not even through the homily. They were there because they wanted to be, not just by force of habit or because in their past the nuns told them it was a mortal sin if they didn’t go. And it wasn’t even Sunday.

This was Saturday, Oct. 19, the date of the Archdiocese of Philadelphia’s  semiannual pilgrimage  to “America’s Church,” the Basilica of the National Shrine of the Immaculate Conception in Washington, D.C.

(See a photo gallery of the pilgrimage here.)

Most of the pilgrims had left their home parish very early that morning to travel by bus 140 miles or so to our nation’s capital for a day of prayer and devotion, including the rosary, opportunity for confession, the crowning of a statue of the Blessed Virgin and the final centerpiece, a Mass celebrated by Archbishop Charles Chaput.

This church holds special meaning for the archbishop. As he explained, he attended many a Mass at the basilica during his years in Washington as a seminarian, and it was there also where he was ordained a deacon.

This date also holds special significance for the archbishop since it celebrated the feast of the North American martyrs, the French Jesuit missionaries who were killed by Native Americans in the 17th century. Archbishop Chaput’s own proud heritage is both French Canadian and Native American.

The missionaries, he said during his homily wearing the crimson vestments invoking the blood of the martyrs, “came here to give salvation through Jesus.”

For those among the pilgrims who were first-time visitors to the basilica, it must have been a revelation. It is not only the largest Catholic church in America but is also one that virtually all Americans can identify with, as it drives home the image of the United Sates as a nation of immigrants.

Yes, the splendid mosaics, the magnificent domes and great bell tower are all very grand. But perhaps most impressive are the more than 70 side altars and shrines — most of them dedicated to the Blessed Mother. The titles of the shrines reflect devotion to Mary by the peoples of many countries, be that Our Lady Queen of Peace, Our Lady Queen of Ireland, Our Lady of Czestochowa, Our Mother of Africa, Our Lady of La Vang or Our Lady of Lourdes.

“We have more than 2,000 people here from the Philadelphia Archdiocese,” said Father Dennis Gill, who organized this year’s pilgrimage. “The National Shrine is also our shrine.”

He has a point. In the early years of its planning Philadelphia’s Cardinal Dennis Dougherty was among the church leaders who got construction off the ground and the main contractor was none other than Philadelphia’s John McShain.

Among those visiting for the first time was Madeline Matorn, who said, “My mom brought me here. It is so beautiful and peaceful, I feel welcome.”

Also a first-time pilgrim was Rose Kinney of St. Timothy Parish in Philadelphia, who was busy taking pictures of the many shrines. The grandchild of immigrants, her grandparents “met on the boat and they raised 19 children in St. Columba Parish,” she said.

Also down for the pilgrimage were 70 seminarians from St. Charles Borromeo Seminary, including Greg Miller, who is in his Spiritual Year.

“This is a beautiful place for the people in the parishes and dioceses from all over the country to get together,” he said.

One of the pilgrims from the Philadelphia Archdiocese enjoying the shrine’s beauty of art and shared faith was Jack O’Brien from SS. Peter and Paul Parish in East Goshen, Chester County.

“This is a great tribute to Our Blessed Mother,” he said. “This is a happy time.”

But if you missed the pilgrimage you really don’t have to wait two years for another one. Our Lord and his Blessed Mother have open house at the Basilica of the National Shrine of the Immaculate Conception every day of the year. You can drop in any time. 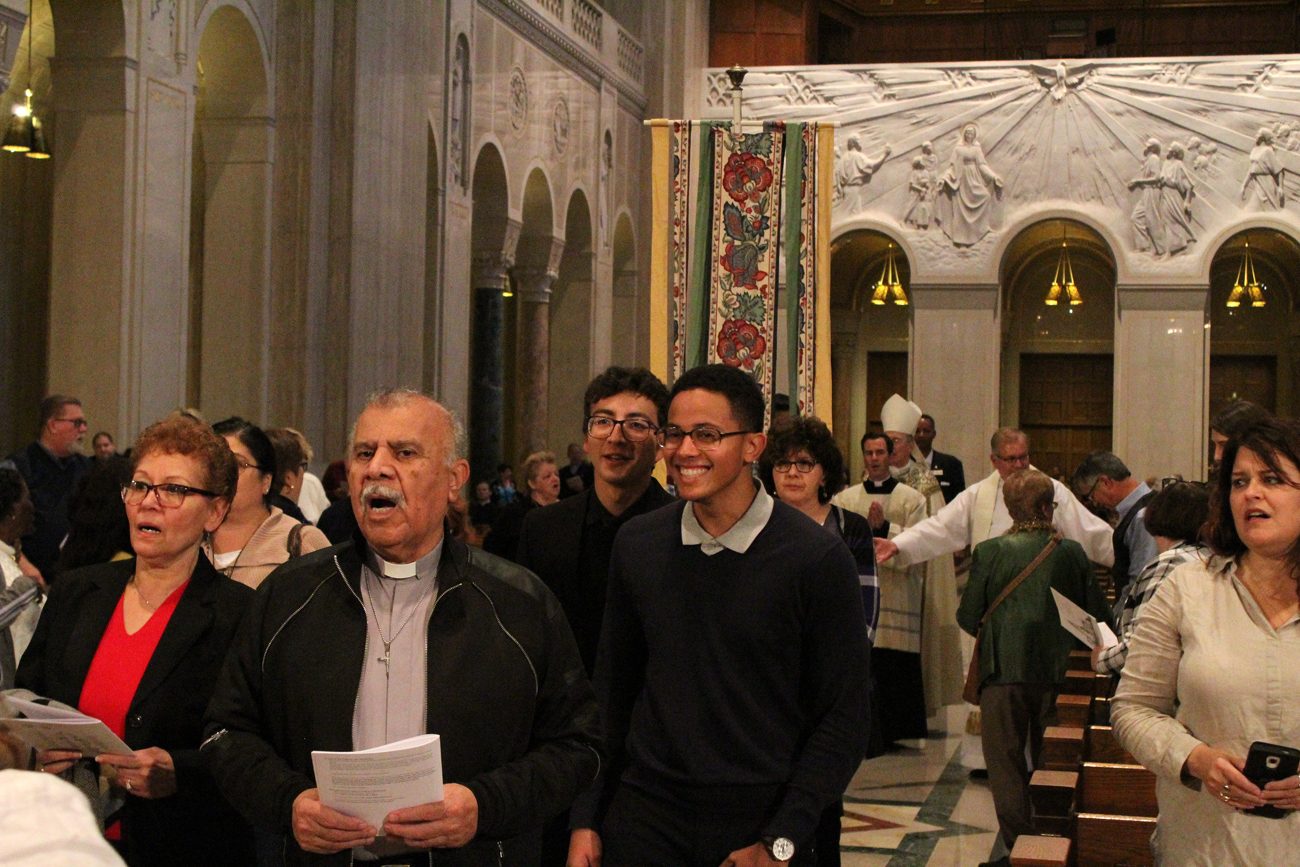 Faithful from the Philadelphia Archdiocese participate in a Marian procession, part of a full day of devotions Oct. 19 at the Basilica of the National Shrine of the Immaculate Conception in Washington, D.C. (Photo by Matthew Gambino)