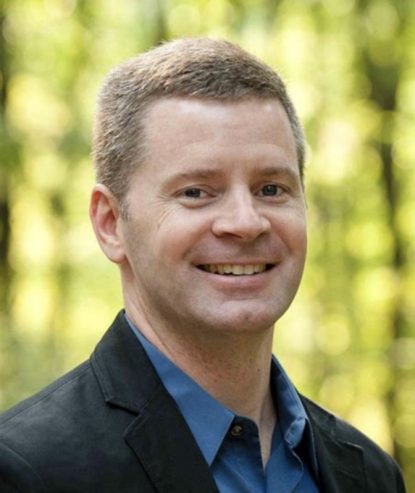 West addressed a group of 65 people at the Howard Center on the Roman Catholic campus with an inspiring call to action meant to invigorate pro-life evangelization in the city and inspire people to be witnesses for life.

The conference was spearheaded by the Pro-Life Educational Foundation in Philadelphia, along with Generation Life, Students for Life of America, Philadelphia Guild of the Catholic Medical Association, Pennsylvania Pro-Life Coalition and other pro-life organizations in Southeast Pennsylvania.

West is best known for his work on St. John Paul II’s series of audience addresses entitled Theology of the Body, which Father Joseph Bongard, Roman Catholic’s president, described as “fundamental respect for yourself and your body.” It’s a message that he called “beautiful, sacred, holy and exciting.”

The day started with an 8 a.m. prayer vigil outside a nearby abortion facility, followed by mid-morning Mass and then the conference at the Howard Center, with a “call to action” for the audience at noon.

In his homily for the Mass that he celebrated, Father Thomas P. Whittingham, pastor of St. Katharine Drexel Parish in Chester, encouraged those in the pro-life movement to live up to the Lord’s call with an attitude of merciful love.

Later in his conference talk, West described Christ’s gift of human freedom, its challenges and how true freedom relates to the issue of abortion and the pro-life movement.

“If we learn to live in the freedom Christ has given us,” West said, “we flourish in all areas of our lives.” In describing the heart of freedom, West referenced the 1994 movie, “The Shawshank Redemption,” saying, “There is a high price to be a witness to the good, true and beautiful. We can actually prefer to be in prison than be free. The resurrected life is freedom. The path to the resurrected life is brutal. So, we prefer prison sometimes.”

Hope, says West, inspires us to live in Christ’s freedom. “I come here today to be a witness to hope,” said West. “The world is Shawshank,” referring to the name of the prison portrayed in the movie. “Most people have become institutionalized. They lost hope. It’s for freedom that Christ set us free.”

West discussed the challenges of living in a culture where relativity and subjectivity seem to be predominant themes. “Jesus said the truth will set you free,” said West. “Today, the culture says, ‘My truth will set me free.’ The battle is between ‘the’ truth and ‘my’ truth.” He said people tend to prefer their own version of the truth. “Why do we think ‘my’ truth is better than ‘the’ truth?

“We’ve all experienced ‘the’ truth being imposed on us without respect for our own freedom,” said West, “and we experience it as an affront to our human dignity, our own self-determination.”

West described the risks in our current culture, as “the imposition of groupthink by those who have the most money and media influence.”

He referenced the landmark 1992 U.S. Supreme Court decision in Planned Parenthood v. Casey, which defined liberty as the right to define one’s own concept of existence, of meaning, of the universe, and the mystery of human life. “You are not God. That is a lie,” said West.

He went on to identify the spiritual battle at the heart of the pro-life movement. “Lucifer hates the power of generation in our bodies,” West said. “The enemy is after the woman to convince the woman that God doesn’t love her.”

West described how the Hebrew word for woman means “to be opened” in order to receive divine love and bring it forth, and that the Hebrew word for male means “to remember.” Drawing on the creation story in Genesis, West said, “The enemy wants to get Adam to forget (Eve) so that the woman will close. The enemy’s goal has been to turn the womb, the place of life, into a tomb, the place of death.”

Local Catholics in the audience gained much inspiration during the day’s events.

Matthew Hummel, a teacher and moderator of the Respect Life Club at Roman Catholic, said he was sure “there will be intimate connections drawn from this event. People think (abortion) doesn’t affect young men. It’s destructive to the spiritual lives of young men.”

Alexander Richards, a freshman at Roman Catholic and member of the Respect Life Club, said he “didn’t know what pro-life was” before enrolling in the school. “It was so much more than I knew,” he said. “I want to go to more (pro-life) events.”

“I always wanted to go to the March for Life,” said Nicholas Morgan, a senior at Roman Catholic and member of the Respect Life Club. “My grandparents went until they couldn’t anymore. They like that I go.”

On attending the True Freedom conference, Morgan said, “It’s good to meet other like-minded people. This is where I’m supposed to be.”

Joe Dembic, program manager for Generation Life in Philadelphia, said he hopes the conference will inspire young people to be pro-life witnesses. “We’re hoping young people will get a new perspective on how our society is spreading a culture of death. We hope they’re inspired to get involved in the pro-life movement and understand why this work is so important.”

Father Bongard said the pro-life message “resonates with young people, but they’re not hearing it from the media, the government, or public policy.” Ultimately, he suggested, it’s the job of the Catholic Church to bring this message to people. “We have a lot of work to do,” he said.
“It doesn’t end here.”

PREVIOUS: Beloved saint lives in his ‘good children’ and those who care for them