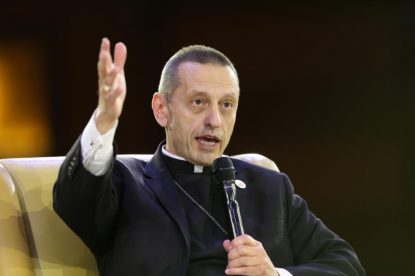 WASHINGTON (CNS) — Retired Connecticut Superior Court Judge Robert Holzberg Oct. 1 released the results of a nearly yearlong independent investigation into the handling of the abuse crisis by the Diocese of Bridgeport, Connecticut.

The investigation covered the approximately 66 years from the establishment of the diocese to the present.

It found that “the existence of sexual abuse by certain priests of this diocese, particularly abuse of children, was known to the diocesan leadership at least as early as 1953. 281 individuals have been identified as having been abused during the diocese’s approximately 66-year history, nearly all when they were minors, by 71 priests.”

The report, titled “Clerical Sexual Abuse Accountability Report,” credits Bishop Frank J. Caggiano, who has headed the Bridgeport Diocese since 2013 — and who in October 2018 retained Holzberg and the law firm of Pullman and Comley to conduct this investigation — and his predecessor, then-Bishop William E. Lori, with reversing the diocese’s “approach to reporting abuse and disciplining abusers.”

Until their tenures, “the collective response of diocesan officials to the sexual abuse crisis was inadequate in nearly every way,” the almost 90-page report said.

“The single gravest moral and legal lapse was the consistent practice of Bishops Lawrence Shehan, Walter Curtis and Edward Egan — over four decades — of leaving abusive priests in service, and thereby making it possible for them to continue committing abusive acts,” the report said.

“Until 1990, Bishops Curtis and Egan failed even to acknowledge, let alone comply with, their legal obligations arising from the 1971 state law mandating that priests report allegations of child sexual abuse to either law enforcement or the Department of Children and Families,” it continued.

“The diocese’s treatment of survivors during the Egan and Curtis administrations, coupled with its handling of accused priests, has deepened the wounds of the abused beyond the initial damage inflicted by the priests themselves,” said the report, which devotes several pages to the two prelates.

“Bishop Curtis and his staff ignored the pain of survivors and their families, and made no effort to assist them,” it said, adding: “Bishop Curtis prioritized the avoidance of scandal over the protection of people.”

Regarding Bishop Egan’s response, the report said it “was profoundly unsympathetic, inadequate and inflammatory.”

“He openly acknowledged to his staff, and signaled to the public through his behavior, that he believed his principal responsibility was to preserve the assets and reputation of the diocese rather than to work for the well-being of survivors and secure justice for them. His (was) indifference, if not outright hostility, to the suffering of victims,” it said.

The report does note Bishop Egan formulated the diocese’s “first written policy on sexual abuse, direct that training programs be implemented, and eventually take measures — on the eve of his appointment to the Archdiocese of New York — to resolve the protracted civil litigation he had previously escalated,” it said, but this did little to undo the damage.

The report pointed to many changes that took place in how the diocese addressed abuse under the leadership of Bishop Lori, who has been Baltimore’s archbishop since 2012, and Bishop Caggiano.

“Bishop Lori’s efforts in Bridgeport borrowed from his efforts, as a member of the U.S. Conference of Catholic Bishops, to influence the emerging national campaign by Catholic bishops to address sexual abuse of minors, and vice versa,” the report said. “He participated in drafting the ‘Charter for the Protection of Children and Young People,” which United States bishops adopted in 2002 along with Essential Norms for Diocesan Policies and Sexual Abuse.”

Bishop Caggiano “has extended the policy reforms of the Lori administration while breaking new ground on survivor outreach and reconciliation,” it said. Since his installation, the bishop’s “touchstones for his actions” have been accountability, transparency, and protection of children, it added.

The two prelates have, the report said, “adopted and enforced policies requiring that all credible abuse allegations be reported to civil authorities, as well as ‘up the chain’ within the church itself. They have adopted ‘zero-tolerance’ policies for priests (and other diocesan personnel), committing to permanently and completely removing clergy from duty for any incident of sexual abuse. They have diligently used the procedures made available to them by the Holy See to dismiss the gravest offenders from the priesthood altogether.”

In addition, the two prelates “have established a new approach of outreach to, conciliation with and support of survivors and the faithful that has been positively received in much of the diocesan community,” it added.

However, the report acknowledged that many in the Bridgeport Diocese “remain extremely skeptical of healing efforts or have been permanently alienated from the church, a reflection of the extreme and insidious damage wrought not just by the abusers but also by the diocese’s own earlier, ineffective response.”

In an Oct. 1 letter to the faithful of the diocese, Bishop Caggiano said Holzberg and his investigative team had “unfettered access” to diocesan files; reviewed over 250,000 records and hundreds of thousands of individual documents; inspected parish offices, files and computers; and interviewed key participants.

“While this is a difficult day in the life of our church, I hope and pray that it is also an historic step toward closure and reconciliation for all those affected by the crisis, particularly the victims and their families who have suffered so much,” Bishop Caggiano wrote.

“The report explores a deep wound in the life of our church, one that has profoundly changed and challenged all of us. Yet there is reason for hope, because so much work has already been done to create awareness, to protect our children and prevent future abuse,” he added.

The report is available in its entirety on the diocesan website, www.bridgeportdiocese.org, and includes an executive summary for the reader.

Bishop Caggiano reiterated his “profound and heartfelt apology to all who have suffered abuse at the hands of any cleric in our diocese” and apologized “to all those who have lost a sense of trust or feel betrayed by church leadership.”

He said his “personal commitment” is to do “whatever is humanly possible to eradicate this evil from our midst.”

He also pledged in the months ahead to “swiftly implement” recommendations included in Holzberg’s report.

Those recommendations fall into six broad categories: continued outreach to survivors; further review of certain previous credibility determinations about past allegations of abuse; standard procedures for investigating sexual abuse allegations against bishops; mandated reporting procedures; changes to the Safe Environments program mechanics; and better engagement and inclusion of the presbyterate in the effort to combat abuse, with further response to the morale damage among priests caused by abuse by their colleagues and the diocese’s past response to abuse.

“Having undertaken important initiatives so far, this administration still has much to do,” the report said.

In his letter, Bishop Caggiano said: “It is my sincere hope and prayer that, with the release of this historic report, we can come to terms with the sins of the past, move toward deeper reconciliation, continue to walk with our survivors on their journey of healing, and work together for the spiritual renewal of the diocese.”

“I ask for your prayers and support as we work together to renew our diocesan church,” he said.