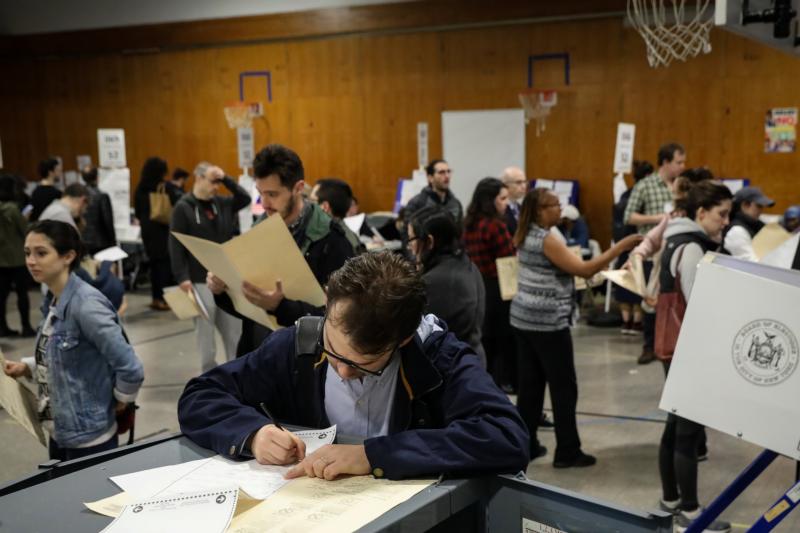 A voter fills out his ballot in the midterm elections Nov. 6, 2018, at a polling station in the Brooklyn borough of New York City. Rancor in politics, especially these days, may be the norm, but a nationwide effort is underway to remind people that civility in political discussions is a virtue. (CNS photo/Brendan McDermid, Reuters)

WASHINGTON (CNS) — Rancor in politics, especially these days, may be the norm, but a nationwide effort is underway to remind people that civility in political discussions is a virtue.

The U.S. Conference of Catholic Bishops is introducing the Civilize It campaign Nov. 3 at parishes around the country. It stresses that respectful dialogue — rather than name-calling and nasty barbs — can occur among people with differing political views.

“In part, this campaign is really in response to the vitriol that we see in public discourse on both sides of the aisle,” said Jill Rauh, director of education and outreach in the USCCB’s Department of Justice, Peace and Human Development.

“Civility is something that we, at least in theory, should all agree on,” she told Catholic News Service. “Catholics don’t always come down on the same side in terms of where they discern to be voting. But everyone should agree that we can be modeling love for neighbor and we can be modeling the example of Christ.”

The date of the program’s introduction is significant because it is precisely one year from the 2020 presidential election.

The idea for Civilize It originated in the Social Action Office of the Archdiocese of Cincinnati in 2016. Its success in southwest Ohio caught the attention of the USCCB, which this year decided that the model, with a few tweaks, could be introduced nationwide.

Rauh said about a dozen dioceses were expected to move quickly to adopt the campaign starting at Masses Nov. 2 and 3 with others expected to follow during the next several months.

The effort also will incorporate the U.S. bishops’ quadrennial document, “Forming Consciences for Faithful Citizenship.” The document remains unchanged this year, but the bishops will vote on a letter and four short video scripts to supplement it during their annual fall assembly in Baltimore Nov. 11-13.

Andrew Musgrave, director of the Cincinnati Archdiocese’s Social Action Office, said he planned to alert parishes that the program is continuing for the next year. He said the effort there will build on the success of the program in 2016, which saw parishioners dozens of parishes becoming involved.

The campaign’s cornerstone is a three-part pledge that individuals can take to respect civility, to root political views in the Gospel and a well-formed conscience, and to encounter others with compassion.

Personal reflection is a significant component of the program. Resources developed by Rauh’s office will help guide participants in the tradition of an examination of conscience so they can better understand how they can respond to people with whom they disagree.

Other resources include a pastoral aid that includes homily guides for Masses Nov. 2-3, promotional materials for use in parishes and discussion groups, and examples of social media messaging.

The campaign “is a way the church can be an example,” Rauh said. “We can bring our moral voice to the public square.”

Civilize It also is part of a wider campaign known as Golden Rule 2020 being undertaken by the National Institute for Civil Discourse at the University of Arizona starting Nov. 3.

Cheryl Graeve, national organizer for the institute, said the campaign’s title is rooted in the widely held value among religious and non-religious people and Christians and non-Christians of “treating another person as you expect to be treated.”

“We’re increasingly concerned about the lessening of trust between people and government and for helping strengthen our democracy,” she said.

The program emphasizes the development of personal behavior to soften the angry rhetoric and harsh language that can emerge in any discussion about politics, explained Theo Brown, director of faith-based programs at the institute.

“We think the Golden Rule is a practical strategy because really it is a transformational thing. It can help transform that hostile behavior. We’re trying to break the cycle (of incivility). It’s very difficult,” Brown said.

The institute is primarily working with Christian denominations in implementing its program from its Washington office.

Among those that developed Golden Rule 2020 are the National Council of Churches, National Association of Evangelicals, Presbyterian Church USA, Evangelical Lutheran Church in America, American Baptist Churches USA, Mormon Women for Ethical Government and the USCCB’s Department of Justice, Peace and Human Development.

Graeve said that a conversation guide is being developed by the institute.

“It is really meant for anybody to explore a few questions together that look at the common beliefs, how they hold the Golden Rule as a practical idea,” she said.

“Golden Rule 2020 encourages the fact that the foundation of our country and democracy is that a diversity of ideas is important for solutions and relationships,” Graeve added. “We’ve got to have the will to engage in those different ideas but from a place of common respect and common listening to each other.”

Information and resources on the Civilize It campaign is online at civilizeit.org. Information about Golden Rule 2020 is online here.

NEXT: Brothers describe what ‘crystallized’ decision to choose religious life