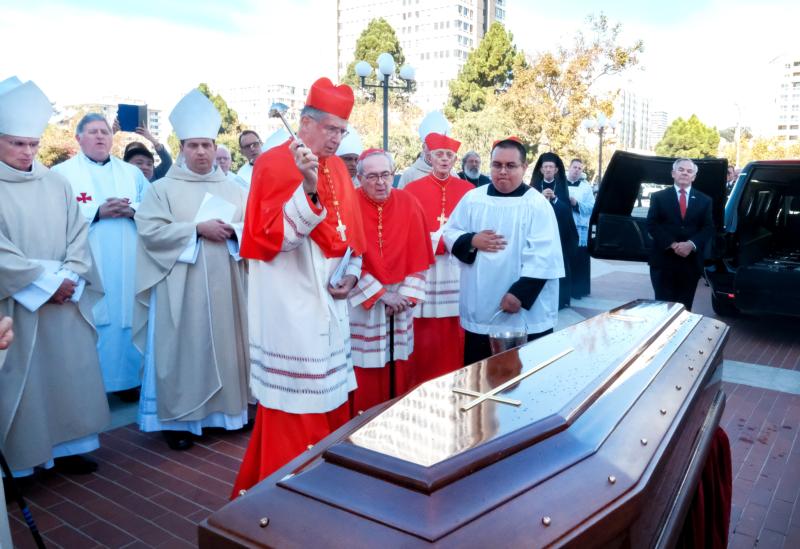 SAN FRANCISCO (CNS) — Cardinal William J. Levada was remembered as a friend, family member, pastor and churchman who was “truly present to the core of his being.”

Cardinal Levada’s gift of presence was evident in all he did but perhaps shone through most notably in the intense focus he brought to preparing the host at Mass, Archbishop John C. Wester of Santa Fe, New Mexico, said in the homily at the cardinal’s funeral Mass Oct. 24 at St. Mary’s Cathedral in San Francisco.

“I was struck by how he prepared the host, the look on his face,” said Archbishop Wester, a former San Francisco auxiliary bishop. “He was present to the Real Presence, and he was touching the face of the risen Christ, and he knew it.”

Cardinal Levada, 83, who served as archbishop of Portland, Oregon, and of San Francisco before Pope Benedict XVI named him to head the Vatican’s doctrinal office in 2005, died unexpectedly in Rome on Sept. 26.

Citing John’s Gospel, Archbishop Wester stressed that Cardinal Levada brought an incarnational approach to all of his relationships, from the beloved “Uncle Bill” to his nieces, to the pastor tolerant of others’ flaws and aware of his own, to the hardworking global churchman willing to take on tough jobs and always with the integrity of the church’s communion in mind.

John’s Gospel is distinct from, but not opposed to, a more institutional, organizational understanding of the church, Archbishop Wester said.

He said the cardinal had a “gift of seeing things from a different perspective.”

Archbishop Wester quoted San Diego Bishop Robert W. McElroy, also a former auxiliary who served under Cardinal Levada when the cardinal was archbishop of San Francisco, on the cardinal’s “natural graciousness and optimism that could bridge barriers at key moments. He always found a way to bring people together.”

Quoting St. Francis de Sales, Archbishop Wester said of Cardinal Levada: “There’s nothing so strong as gentleness and nothing so gentle as real strength.”

“It was never about him,” Archbishop Wester said. “It was always about the church he loved so much. He was a humble man who always put others first.”

Following a final blessing of his casket on the cathedral plaza by Cardinal Mahony with assembled prelates, clergy and family members, the cardinal was interred in the bishops’ mausoleum at Holy Cross Cemetery in Colma.

In his homily at a prayer vigil for Cardinal Levada Oct. 23 at the cathedral, Bishop Stephen J. Lopes of the Personal Ordinariate of the Chair of St. Peter, said “out-poured love is the heart of vocation in the church and unlocks the mystery of priesthood. It is the standard of love by which Cardinal Levada will be judged.”

He said the cardinal learned this love first in his family.

“Losing his father so early, he was deeply devoted to his mother, and to his sister and brother-in-law,” he said. “It’s a love that flowed naturally to his nieces, Julianne and Steph, and to their children. By the way and for the record: When he would take them to Legoland and said that it was ‘because they loved going there’ … I don’t buy it. He loved that stuff.”

The cardinal’s priestly ministry “was very much a life poured out for the needs of the church,” Bishop Lopes said.

“He was ordained for the Archdiocese of Los Angeles not by happenstance, but because he loved L.A.,” he said. “Now, as a pious San Franciscan, I may think that odd, but there is no denying it. And so it was a real sacrifice for him to spend so little time there, his assignments in the church taking him seemingly farther and farther away. The good and needs of the church came first for this man of the church. Always.”

On a lighter note, Bishop Lopes joked about the cardinal’s reputation as a backseat driver.

“Those of us who have driven for the cardinal over the years have had to contend both with his chronic impatience and his near constant tendency to ‘assist’ with directions,” he said, “I actually feel that I have missed out in my relationship with him in one important way: Never did I have the experience — as Msgr. Tom Merton and Bishop John Wester both did — of having him get out of the car and begin directing traffic.”

Bishop Lopes said he later found out that the cardinal used to command the navigator’s seat on family trips, making his older sister ride in the back.

“Whether at 8 or 80, the journey fascinated him,” Bishop Lopes said. “The places, the people, the experiences: he loved the adventure of it all.”

“It was he who first noted the providential coincidence that his casket lay on the very floor before the very same altar where, 58 years earlier, William Levada was ordained a priest.”

PREVIOUS: Appeals court rules against Little Sisters of the Poor over HHS mandate