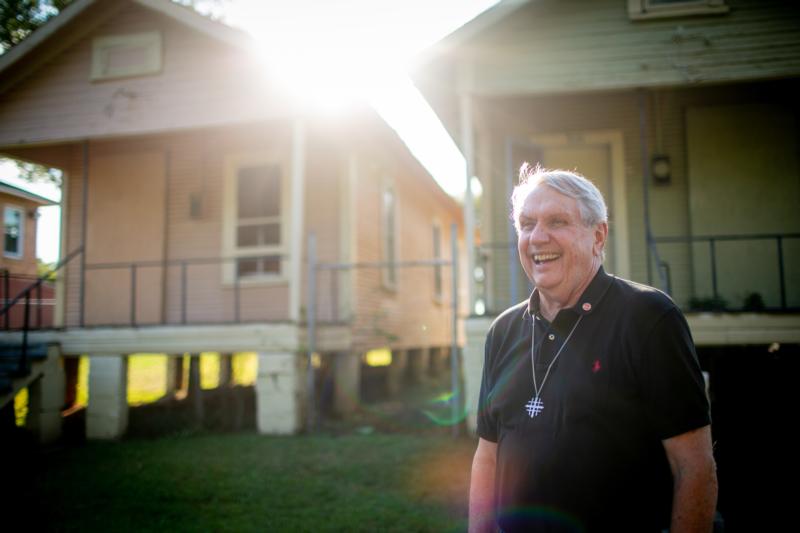 Mack McCarter, who has spent a lifetime helping hurting communities by building “a system of caring relationships,” starting in his hometown of Shreveport, La., is the winner of Catholic Extension’s 2019-2020 Lumen Christi Award. He is pictured in a Sept. 26, 2019, photo. (CNS photo/Rich Kalonick, courtesy Catholic Extension)

SHREVEPORT, La. (CNS) — Mack McCarter, who has spent a lifetime helping hurting communities by building “a system of caring relationships,” starting in his hometown of Shreveport, is the winner of Catholic Extension’s 2019-2020 Lumen Christi Award.

He was nominated by Father Peter B. Mangum, who is the administrator of the Diocese of Shreveport. McCarter was one of 11 finalists chosen out of 49 nominees.

McCarter had been pastor of an evangelical church in west Texas for many years before he returned to his hometown in 1991 and found many of its once vital and thriving neighborhoods were in decline. They were dealing with gangs, drugs, violence, crumbling homes and “people living in isolation.”

Believing the situation could be healed, he founded Community Renewal International in 1994 with one goal in mind: to rebuild Shreveport by uniting individuals, churches, businesses and civic groups and to resurrect the foundation of relationships in neighborhoods.

“McCarter set out to build a system of caring relationships by tapping into two inherent human needs — to love and to be loved,” Catholic Extension said in an Oct. 7 news release about the Lumen Christi winner. “McCarter recognizes that relationships make people feel safe, confident and optimistic.”

Because of his efforts, crime has dropped in some Shreveport neighborhoods by 52%.

“I wanted to connect people by what we share in common — the capacity to love and care for each other — which is the basis for building relationships,” he said.

The Lumen Christi Award is the highest honor Catholic Extension bestows on a missionary working in the United States. It honors an individual or group working in one of America’s mission dioceses “who demonstrates how the power of faith can transform lives and communities.”

Catholic Extension, which is based in Chicago, raises and distributes funds to support U.S. mission dioceses, many of which are rural, cover a large geographic area, and have limited personnel and pastoral resources. It has been supporting the work and ministries of these mission dioceses since its founding in 1905.

“I have been honored and humbled getting to know and spend time with Mack McCarter during this Lumen Christi Award process,” Father Jack Wall, president of Catholic Extension, said in a statement.

“He embodies what I hold so dear — that when we bring good people together in faith, good things happen, communities are transformed and they change the world around them. That’s what Mack has done and that’s why he is the recipient of our 2019-2020 Lumen Christi Award.”

McCarter and the Diocese of Shreveport will split a $50,000 grant.

Community Renewal International focuses on three primary initiatives — the Renewal Team, the Haven House and the Friendship House. Volunteers build homes, host afterschool and adult literacy programs, and unite neighborhoods by placing “We Care” signs in their yards and bumper stickers on their cars.

“We’re not going to make caring people — they’re already caring. We’re just going to begin to make them visible and be the biggest gang in town,” said McCarter, whose team consists of over 50,000 people.

The Community Renewal International model has spread to other U.S. cities and across the globe.

“One of the pillars of our work is to bring folks together based on what they share in common, not how different they are,” McCarter said. “What we share in common is this God-given capacity to care for one another and be cared for.”