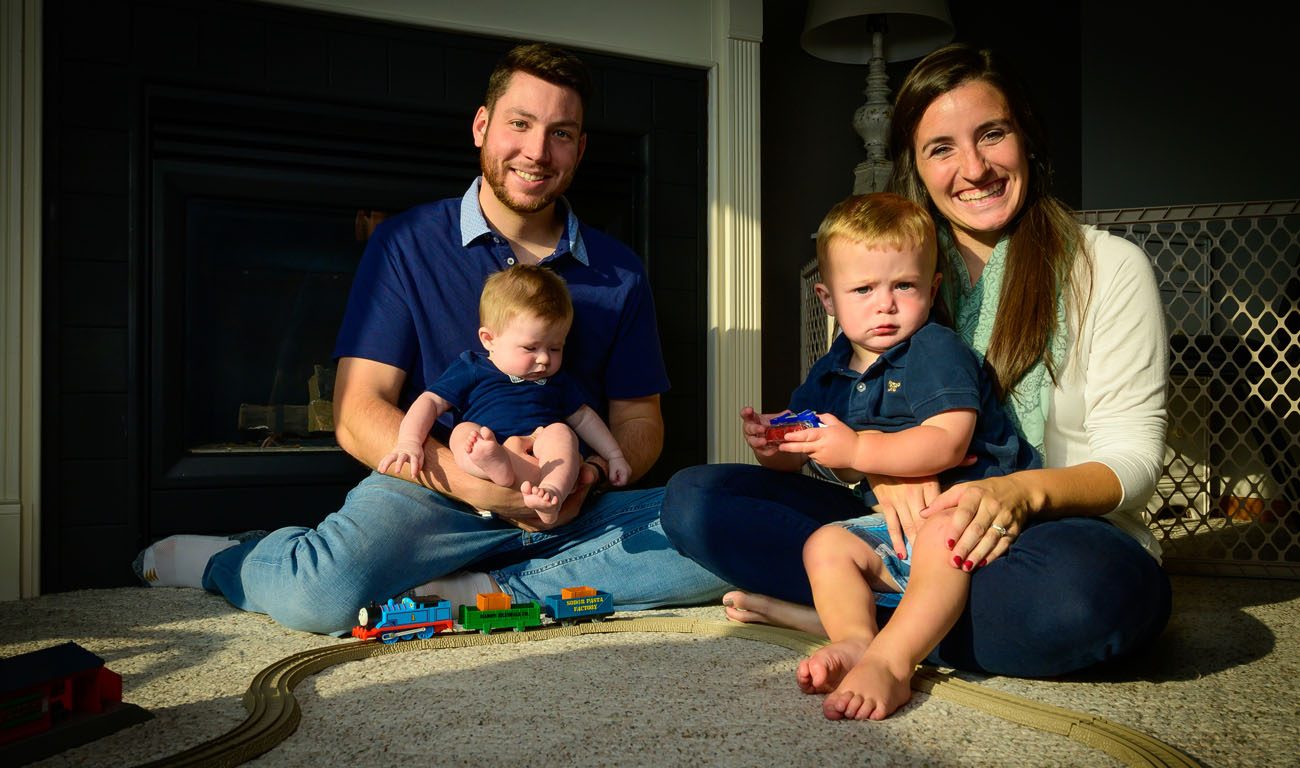 David and Maria Schuette, seen with their sons, 8-month-old Eli and 18-month-old Isaac, are reaching out to other couples considering adoption. The family, who belongs to SS. Peter and Paul Parish in Kiel, Wis., were at the hospitals for each birth and remain in close communication with their sons’ birth parents. (CNS photo/Sam Lucero, The Compass)

KIEL, Wis. (CNS) — After David and Maria Schuette got married in 2015, they wanted a family right away but months later they found out that infertility issues would likely prevent them from having children of their own.

“It was tough knowing that everything I thought about growing a family as a little girl … it wasn’t going to happen that way,” Maria told The Compass, diocesan newspaper of Green Bay. “So there was a lot of pain and sadness over the loss of what we thought growing our family would look like,” she added.

David agreed. “The pain we were experiencing was a combination of the infertility and the unknowns of adoption. Even when making the decision to adopt, we were fearful it would take five years, if it even happened at all. And we didn’t know where to start or what the future would look like.”

Now, it turns out the future is working out well for the Schuettes, proud parents of Isaac, 18 months old, and Eli, 8 months old, both adopted.

David and Maria, members of SS. Peter and Paul Parish in Kiel, were at the hospitals for each birth and remain in close communication with their sons’ birth parents.

The new parents, who are both 30, are thrilled to be growing their family, even if it occurred differently than they originally planned.

“The joy of parenthood isn’t dependent on whether your child is your biological child. We have so much love and joy being parents to Isaac and Eli,” said David, adding they are discussing adopting a third child.

Their adoption journey began in spring 2017.

At the time, Maria worked for the Diocese of Green Bay in youth ministry and religious education so she knew about Catholic Charities’ work in facilitating adoptions.

“Catholic Charities was phenomenal in helping us understand adoption from a pro-life perspective,” Maria said, which included “how to care and walk with birth mothers and birth fathers and what our role was in that entire process.”

She said they received an email that Isaac’s parents had been referred to Catholic Charities and that several other matches fell through before they connected with Isaac’s parents.

“Four weeks later, Isaac was born,” Maria said. “When Isaac was about 7 months old, we met another birth mother through a friend of a friend, and that’s how we got two adoptions 10 months apart.”

Although David and Maria were at the hospitals for each birth, the two situations were different.

Isaac was born with a congenital heart defect and spent 11 days in the hospital’s neonatal intensive care.

“Isaac is doing great now,” David said. “He’s sort of a miracle baby. But the doctors weren’t sure how his health would be when he was born.”

David and Maria were able to be in the room with Eli’s birth.

“We were very, very lucky to be at the hospitals for both of the boys’ births and to be matched the way we were,” David said.

Early in the adoption process, the Schuettes wondered about ongoing contact with birth parents.

“What if the birth parents wanted to come back and co-parent?” she recalled thinking. “That was really a bit scary.”

However, after learning more and being in contact with both sets of birth parents, she now calls it “a very special relationship. We have a lot of respect for the birth parents. Both sets expressed before they had the boys that they would like to have contact.”

“We really give preference to the birth parents with how they’d like to be communicated with,” Maria said. “We very much love them for who they are and who God made them to be and the decision they made to place their children with us.”

David and Maria are pleased that their sons are close in age and feature different personalities; Isaac is outgoing, whereas Eli is reserved.

“We continue learning every day how to be parents,” Maria said. “Whether we had the boys biologically or they came to us through adoption, they are God’s children first and we are caretakers of them. We learn every day how to be better parents, how to be more loving, more patient, more giving. And we have a lot of fun in the process.”

The Schuettes enjoy sharing those experiences with others. In part because they were public about the adoptions, Maria said about 10 families, who are also struggling with infertility and considering adoption, have reached out to them.

“The biggest thing I’d say to (prospective adoptive parents) is to give it a chance,” said David, noting that both his youngest sister and paternal grandmother were adopted. “For the most part, people are very open and want to share their experiences and help others. And agencies do a great job of educating.”

“Adoption is a great blessing and gift, but also a roller coaster of emotions,” Maria said. “We tell families to trust and have faith that there is a child out there for you. Our family is a picture of that.”

Maria also had a message for birth parents considering placing their child for adoption.

“Know that you aren’t alone and that there are many, many people who love you and want to help you,” she said. “Please don’t be afraid to reach out for help. Know there are people there to support you every step of the way.”

Wideman writes for The Compass, newspaper of the Diocese of Green Bay.

NEXT: March for Life 2020 theme pays tribute to pro-life view of early feminists