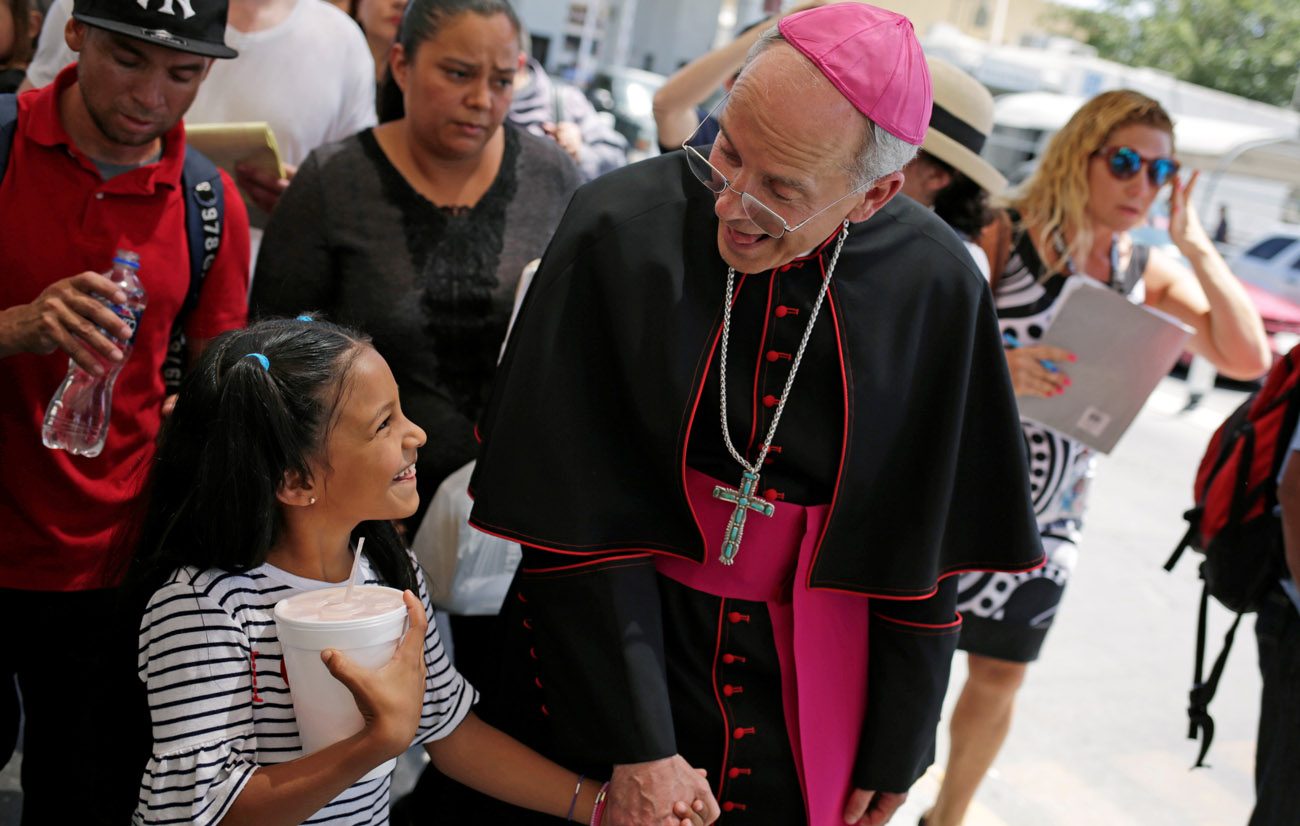 Bishop Mark J. Seitz of El Paso, Texas, shares a smile with a Honduran girl named Cesia as he walks and prays with a group of migrants at the Lerdo International Bridge in El Paso June 27, 2019. Bishop Seitz has released a pastoral letter on racism which strongly condemns the “xenophobia ravaging the United States” and describes the border wall as a “monument to hate.” (CNS photo/Jose Luis Gonzalez, Reuters)

WASHINGTON (CNS) — It’s a pastoral letter that pulls no punches, goes far into the past and continues up to the recent present of racism at the U.S.-Mexico border.

Bishop Mark J. Seitz of El Paso, Texas, released a pastoral letter Oct. 13, on the eve of the controversial holiday that Columbus Day has become, pointing to the church’s role in racism at the border, particularly among indigenous communities, describes the pain of Latinos in the El Paso area following a mass shooting in August, but also calls on authorities to spare the life of the accused perpetrator.

Invoking martyrs who include St. Oscar Romero, Blessed Stanley Rother and four Maryknoll women missionaries killed in El Salvador, Bishop Seitz said he wishes that, like them, “I may speak without fear when it is called for and help to give voice to those who have not been heard.”

The letter titled “Night Will Be No More” was unveiled at the end of a social justice gathering of Catholic Latino organizers, labor leaders, scholars and activists in El Paso Oct.11-13. It begins and ends with the specter of the Aug. 3 shooting at a Walmart in the city, a violent and bloody event that authorities believe targeted Latinos.

“Hate visited our community and Latino blood was spilled in sacrifice to the false god of white supremacy,” wrote the bishop.

That event led him to write the letter, he explained, “after prayer and speaking with the people of God in the church of El Paso” to “reflect together on the evil that robbed us of 22 lives.”

Among some of what he has heard: “Latinos now tell me that for the first time in their lives they feel unsafe, even in El Paso. They feel that they have targets on their backs because of their skin color and language. They feel that they are being made to live in their own home as a ‘stranger in a foreign land.'”

The killing, he said, was an example of the racism toward Latinos that has reached “a dangerous fever pitch” in the nation.

“Our highest elected officials have used the word ‘invasion’ and ‘killer’ over 500 times to refer to migrants, treated migrant children as pawns on a crass political chessboard, insinuated that judges and legislators of color are un-American, and have made wall-building a core political project,” he said. “In Pope Francis’ words, these ‘signs of meanness we see around us heighten our fear of the other.’

“The same deadly pool of sin that motivates the attack on migrants seeking safety and refuge in our border community motivated the killing of our neighbors on August 3rd,” he continued. “Sin unites people around fear and hate. We must name and oppose the racism that has reared its head at the center of our public life and emboldened forces of darkness.”

Even as he repudiated the fear and destruction the massacre caused, Bishop Seitz made a plea to authorities to spare the life of accused shooter Patrick Crusius, the 21-year-old who is said to have left messages on social media saying he was carrying out the shooting because of the “Hispanic invasion of Texas.” Texas prosecutors have said they will ask for the death penalty if he’s convicted.

“Justice is certainly required. But the cycle of hate, blood and vengeance on the border must meet its end,” he wrote. “While the scales of justice may seem to tilt in favor of the necessity of lethal retribution, God offers us yet another chance to choose life. Choose in a manner worthy of your humanity.”

He laid out how racism can make a “home in our hearts, distort our imagination and will, and express itself in individual actions of hatred and discrimination.”

“This mystery of evil also includes the base belief that some of us are more important, deserving and worthy than others. It includes the ugly conviction that this country and its history and opportunities and resources as well as our economic and political life belong more properly to ‘white’ people than to people of color,” he wrote. “This is a perverse way of thinking that divides people based on heritage and tone of skin into ‘us’ and ‘them’, ‘worthy’ and ‘unworthy’, paving the way to dehumanization.”

Dark-skinned people are subject to different standards and treatment and the Catholic Church is not without fault in this, he said, adding that “even some of our seminarians have talked about experiences in seminaries in different parts of the country where it was presumed that their academic preparation was inferior and when they were the butt of jokes suggesting that their families must know something about drug trafficking.”

He wrote that the proposed border wall is a symbol of this type of exclusion.

“The wall deepens racially charged perceptions of how we understand the border as well as Mexicans and migrants. It extends racist talk of an ‘invasion’. It perpetuates the racist myth that the area south of the border is dangerous and foreign and that we are merely passive observers in the growth of narco-violence and the trafficking of human beings and drugs,” he wrote. “The wall is a physical reminder of the failure of two friendly nations to resolve their internal and binational issues in just and peaceful way.”

But just as the letter offered criticism, it offered solutions.

“We must work to ensure all our children have access to quality educational opportunities, eliminate inequality in the colonias, pass immigration reform, eradicate discrimination, guarantee universal access to health care, ensure the protection of all human life, end the scourge of gun violence, improve wages on both sides of the border, offer just and sustainable development opportunities, defend the environment and honor the dignity of every person,” he wrote.

“This is how we write a new chapter in our history of solidarity and friendship that future generations can remember with pride,” he added. “This work of undoing racism and building a just society is holy, for it ‘contributes to the building of the universal city of God, which is the goal of the history of the human family.'”

During Mass, pastors can lead people “to a deeper consciousness of the weight of communal and historical sin that we bring to the table of the Lord in the penitential rite,” he wrote. “We should ask ourselves carefully who is yet not present, and whose cultures are not yet reflected at the banquet of the Lord that we celebrate at the altar?”

At its end, the letter made a plea to President Donald Trump, Congress and the Supreme Court.

“I beg you to listen to the voice of conscience and halt the deportation of all those who are not a danger to our communities, to stop the separation of families, and to end once and for all the turning back of refugees and death at the border,” he wrote.

The full text of the letter can be found here.

NEXT: At 50, FDLC remains focused on liturgical formation for ‘people of God’