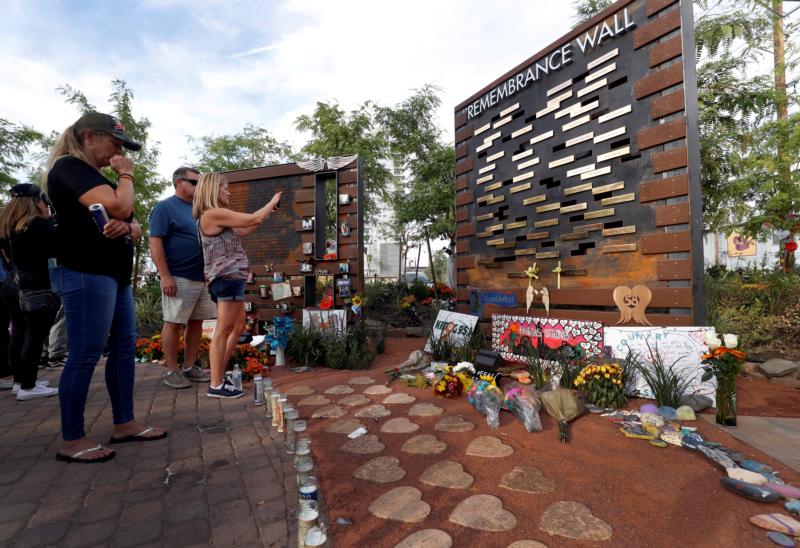 People look at a Remembrance Wall at the Las Vegas Healing Garden Oct. 1, 2018, during the one-year anniversary of the mass shooting in Las Vegas. More than half of American adults consider mass shootings a latent threat, a Reuters/Ipsos survey in August discovered. Many respondents reported experiencing a sense of insecurity with increased levels of anxiety. (CNS photo/Steve Marcus, Reuters)

PORTLAND, Ore. (CNS) — Firearm attacks have changed society in the United States as mass shootings have become more frequent and the public is forced to face the psychological consequences, often silently.

More than half of American adults consider mass shootings a latent threat, a Reuters/Ipsos survey in August discovered. Many respondents reported experiencing a sense of insecurity with increased levels of anxiety.

“This situation puts you on alert because you never know when or where the next massacre will happen. There is an imitation effect and it is happening very frequently,” one respondent said.

“We can never again believe that mass shootings are an isolated exception,” they said in a statement after a pair of early August attacks in Texas and Ohio. “They are an epidemic against life that we must, in justice, face.”

Statistics from the Gun Violence Archive website show that as of Oct. 10 in the United States there have been 326 mass shootings in which four or more people were killed or injured. The shootings accounted for 363 deaths and 1,329 wounded, leaving countless families mired in pain.

After a white supremacist shooter in El Paso, Texas, sought to “kill as many Mexicans as possible” Aug. 3, fear is especially strong among Hispanic families. Mental health hangs in the balance, experts said.

“I feel that the focus of the attacks and racism is directly against us,” said Edith Castillo, executive director of the Catholic Charities program El Programa Hispano in Gresham, Oregon.

Castillo, a mental health counselor, does not mince words in blaming President Donald Trump’s rhetoric and federal immigration policy for some of the violence, especially against Latino people.

It’s not a stretch to say that terms such as “invaders” can spark criminal actions against Hispanics, Castillo said.

“Many people have been fleeing places with a lot of violence in search of a place that gives them peace and quiet, but people are afraid of the current situation,” said Elsa Tzintzun, a mental health counselor at El Programa Hispano. “This causes immigrants to feel isolated and marginalized.”

Even those who were not present during an attack are affected by news reports, she said, explaining that trauma becomes an invisible and silent companion.

In 2014, after a shooting at Reynolds High School in suburban Portland, which left two students dead and a teacher wounded, El Programa Hispano offered psychological support. It was then that staff began to wonder how young people were affected by such incidents.

Tzintzun explained that after violent events it is normal for people to feel anxious and afraid; children may begin to behave differently and the changes can dampen their performance in school. The counselor listed irritability, nightmares, insomnia, tremors, sadness, apathy and lack of concentration as symptoms of fear.

Post-trauma symptoms do not necessarily mean people will develop a chronic problem, she said.

In Hispanic culture, many people think psychologists serve only those with severe mental illness or the rich, Tzintzun said. Mental health professionals who speak Spanish are also difficult to find, she said.

— Physical and emotional care by eating well and on time, exercising and adequate and restful sleep.

— Take time to pray or meditate together as a family and strengthen religious traditions.

— Create support groups with family and friends or with community or church groups.

— Have an action plan to increase the feeling of security, organize personal documents, have a power of attorney for your children and designate a trusted person to take charge if necessary.

Tzintzun also offered suggestions on how parents can help their children:

— Dialogue is essential, so devote time to talk — such as during a daily meal — to allow family members to share concerns, ask questions and discuss emotions.

— Reaffirm safety by allowing children and young people to express their fears and concerns and help them to feel well and safe; a good way to combat fear is by providing information and cautioning children against becoming consumers of political rhetoric.

— Limit television, internet and cellphone time in order to reduce exposure to violence and death, which can cause anxiety and distress.

— Observe changes in behavior: Tell children that after events such as shootings it is normal to feel different; let them know that such feelings can cause misunderstandings or create tensions among family or friends. Establish guidelines that help promote respect and tolerance in the family.

— Strengthen training in values because continuing a faith tradition can help in mental health crises.

“I think that the family is the first school of life and if a child has a solid formation in faith and values, that helps them develop a stable base for managing their emotions and facing life,” Castillo said.

Montana is editor of El Centinela, the Spanish-language newspaper of the Archdiocese of Portland.

PREVIOUS: Judge blocks rule that would have kept some immigrants from legal status