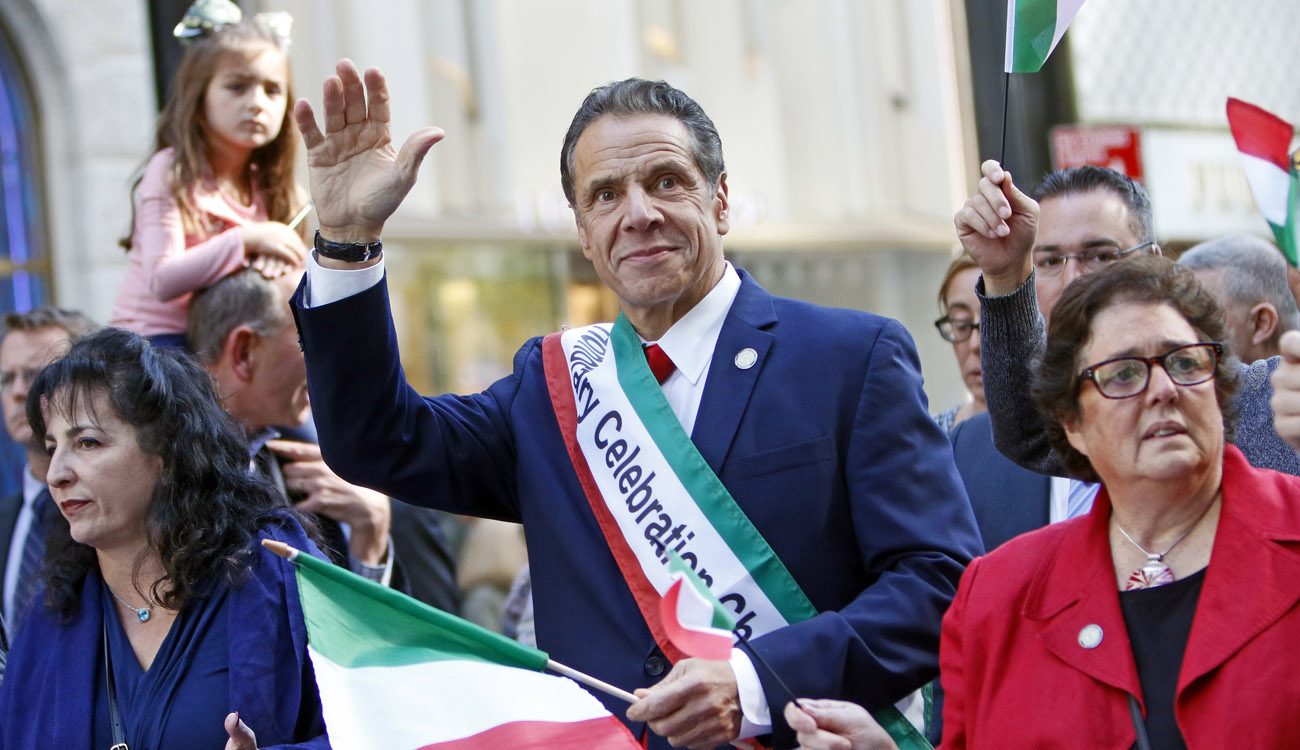 New York Gov. Andrew Cuomo waves as he marches in the Columbus Day Parade in New York City Oct. 14, 2019. Cuomo says the state will build a statue to St. Frances Cabrini, patron saint of immigrants. His announcement followed a decision by the She Built NYC commission to reject funding of a public statue of Mother Cabrini, as she is best known. (CNS photo/Gregory A. Shemitz)

NEW YORK (CNS) — New York Gov. Andrew Cuomo has announced the formation of a “state commission” to work with the Columbus Citizens Foundation and the Diocese of Brooklyn, among others, to fund creation of a statue of St. Frances Xavier Cabrini and find a site for it.

His announcement followed remarks he made Oct. 12 at the Columbus Citizens Foundation gala in New York City pledging his “full support” for a Cabrini statue after the city’s first lady, Chirlane McCray, and her She Built NYC commission rejected the patron saint of immigrants for one of the statues it is planning.

The initiative aims to increase the number of statues of women in New York City.

Mother Cabrini, as the saint is best known, was passed over to be one of first seven women to have a statue built in their honor. She received the most nominations of any of the 320 women nominated.

Outrage over the snubbing of Mother Cabrini by She Built NYC prompted a march in Brooklyn Oct. 6 that drew more than 1,000 people, including many Italian Americans. It was led by Bishop Nicholas DiMarzio of Brooklyn and Msgr. David Cassato, director of the Brooklyn Diocese’s Italian Apostolate. Afterward, Bishop DiMarzio celebrated Mass at Sacred Hearts-St. Stephen Church.

The diocese has already raised $17,000 to make their own statue.

“We should applaud their courage and their activism,” Cuomo said at the foundation gala. “But my friends, we should even do more. We should support them. Let’s join with them tonight. Let’s stand up and demand respect for our community. Let’s lead the way by taking action and let’s build a memorial to Mother Cabrini.”

During the Oct. 14 Columbus Day Parade in New York, a Cabrini statue was displayed on the Diocese of Brooklyn’s float. In addition, statue supporters marched behind a diocesan banner in the parade.

In his homily at the Oct. 6 Mass, Bishop DiMarzio said Mother Cabrini wouldn’t have asked for a statue herself, but noted a statue would honor the memory of immigrants and remind people of their responsibility to each other.

He thanked the Massgoers for attending and encouraged them “to be devoted to Mother Cabrini. She followed Christ and we follow in her footsteps to assist those in need around us.”

Born in Italy, Mother Cabrini was the foundress of the Missionary Sisters of the Sacred Heart. Her dream was to go to China but at the insistence of Pope Leo XIII, who asked her to work among Italian immigrants in the United States, she left Italy for New York in 1889, accompanied by six sisters.

She established orphanages, schools and Columbus Hospital, and held adult classes in Christian doctrine. She received requests to open schools all over the world. She traveled to Europe, Central and South America and throughout the United States. She made 23 trans-Atlantic crossings and within 35 years established 67 houses with more than 1,500 sisters.

NEXT: Four N.Y. priests placed on leave; accused of abuse dating back decades