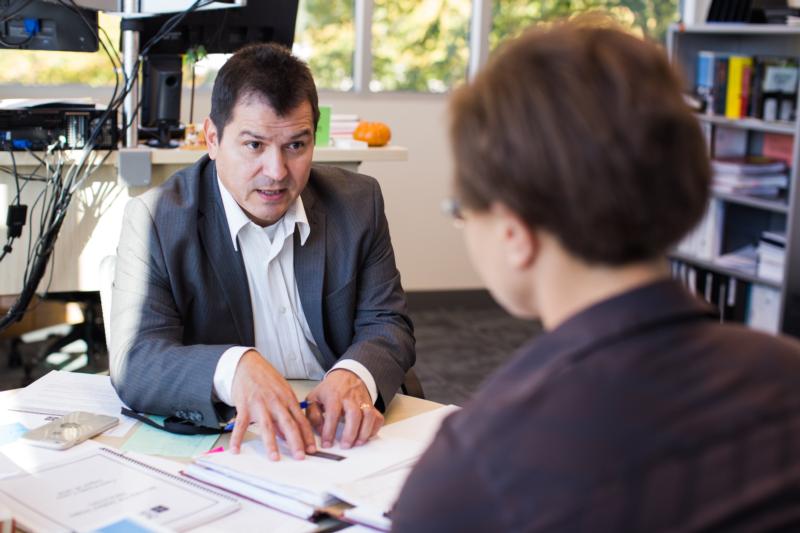 John Herrera, director of Catholic Charities’ Immigration Legal Services, works with a client in the agency’s office in Portland, Ore., Oct. 18, 2018. The nonprofit offers low-cost and free legal services to immigrants in the country illegally who are victims of domestic violence. Advocates and immigration attorneys say fewer such victims are choosing to report abuse or seek help. (CNS photo/Catholic Charities)

PORTLAND, Ore. (CNS) — Amid changing immigration laws and deportation threats, advocates and lawyers have seen a decrease in immigrants who are victims of domestic violence seeking help and reporting abuse to law enforcement.

Staff and partner agencies of Catholic Charities of Oregon — the largest nonprofit immigration legal services provider in the state — have particularly witnessed this fallout.

“People are worried about calling the police because they believe they will turn them over to U.S. Immigration and Customs Enforcement,” said Manuel Gutierrez, a victim advocate with a Catholic Charities partner agency in Umatilla.

Last spring, seven national organizations, including the National Alliance to End Sexual Violence, co-sponsored a survey of nearly 600 immigration attorneys and advocates across the country. More than 76% reported that immigrant survivors have concerns about contacting police.

Catholic Charities frequently hosts information sessions for immigrants in rural Oregon to provide free legal assistance to victims. Typically, “the room is full of people,” said attorney Sarah Purce, assistant director of the nonprofit’s Immigration Legal Services, who said no one came to the last event.

On average, victims of domestic violence — primarily women — make seven attempts to leave an abusive relationship before staying away for good, according to the National Domestic Violence Hotline.

Fear of an abuser’s retaliation, embarrassment and a lack of financial resources to provide for children often makes victims stay, said Norma Obrist, a victim advocate with Tides for Change, which provides shelter and support for victims in Tillamook.

Even without deportation threats, survivors in the Hispanic immigrant community confront additional hurdles, Obrist said, noting that a limited knowledge of English makes it difficult to connect with already-limited Spanish-language resources.

For victims from Central and South American cultures, there also can be “a sense of male privilege, that men have this power and control,” said Obrist. She said a high percentage of Hispanic immigrant victims are Catholic, and some mistakenly think it’s sinful to leave an abusive marriage.

Those without legal documentation face even greater barriers.

“One of the primary things we hear when we talk to undocumented survivors is that their partner will call ICE on them if they leave,” Purce said.

Domestic abusers threatening their victims with immigration consequences is nothing new, but a broader anxiety now exits, said Obrist.

Catholic Charities does not have figures on how many victims are too scared to contact the police or testify against their abuser, “but anecdotally we hear from those who are too afraid to go to court,” said Purce.

The long-standing sanctuary law in Oregon says local law enforcement officers are not supposed to contact ICE, U.S. Immigration and Customs Enforcement, if they believe an individual lacks legal documentation but has committed no other crime.

“But there aren’t repercussions if they do contact ICE,” Purce said. So while immigrants without legal documentation in Oregon have more protections than those in other states, their fears are not unfounded.

Those in rural areas also face challenges with getting help, said Obrist pointing out the isolation, lack of cellphone reception and public transportation.

There’s also a lack of support and legal expertise in rural communities — which is why Catholic Charities of Oregon has taken its Immigration Legal Services on the road.

Catholic Charities offers low-cost legal services to immigrants who are victims of domestic violence in Portland and in recent years it has also received a grant through the U.S. Department of Justice to reach the same demographic in rural areas.

But the $1.1 million three-year grant was recently reduced by $350,000, cutting the four-attorney staff to three. The Oregon Law Foundation had provided a two-year grant to partially augment the loss, but that ended in September, shrinking the program to two attorneys.

“It’s definitely hard to keep services at the same level with reduced funding,” Purce told the Catholic Sentinel, newspaper of the Archdiocese of Portland.

One legal option for abuse victims without legal documentation is the U visa. Established by the federal government in 2000, they offer a temporary legal status and a path toward citizenship for victims of violent crime, including domestic violence. To be eligible, a survivor must somehow aid law enforcement, for example reporting the crime or testifying in court.

Obtaining legal status can be “life-changing for a victim and help them build a safe life for themselves and their families,” Purce said. “Not being able to drive away yourself, make your own money to feed your children; they are really trapped.” With a U visa, survivors receive work authorization, so they can work legally, obtain a Social Security number and get a driver’s license.

Before six months ago, victims could apply for the visa without risk of deportation if the claim was denied. Now, they will be placed in removal proceedings if they do not have legal documents and withdraw their application, or if it is denied, explained Purce.

“You tell them, ‘Here’s a potential thing that might help you in 10 years, but it might put you in removal proceedings. Do you want it?'”

Millet Vargas, an immigrant from Mexico, lacked legal documentation when she discovered her partner was abusing her 5-year-old daughter. But she knew what she wanted to do.

“There was no hesitation about contacting the police,” said 43-year-old Vargas, a member of Holy Trinity Parish in Beaverton. “I didn’t think about my legal status; I was just thinking about my child.”

She stayed in her car hiding from her abuser while waiting for the police to apprehend him. In the back seat was her oldest daughter, her toddler and her 5-month-old.

“What happened is so painful it is hard to explain the feelings,” she said, adding that her faith kept her moving forward.

Vargas eventually connected with Immigration Legal Services, and with the agency’s help obtained a U visa. Because her abused daughter was a minor, Vargas could be included in an application. She became a U.S. citizen in 2016.

“What I received from Catholic Charities was priceless,” said Vargas, who has started her own business and has seen her oldest daughter off to college. “For me, it’s the American dream.”

Vargas never questions her decision to call the police. She said if the current restrictive U visa directives had been in place when she applied, she might not have taken the risk to become a citizen.

“I would’ve been afraid of what would happen to me, that my family would be separated,” she said.

Vargas said she worries about the victims who will not leave abusers due to fear of deportation or family separation. “I know that because immigrants are scared a lot of women will continue to live in terrible situations — their children, too.”