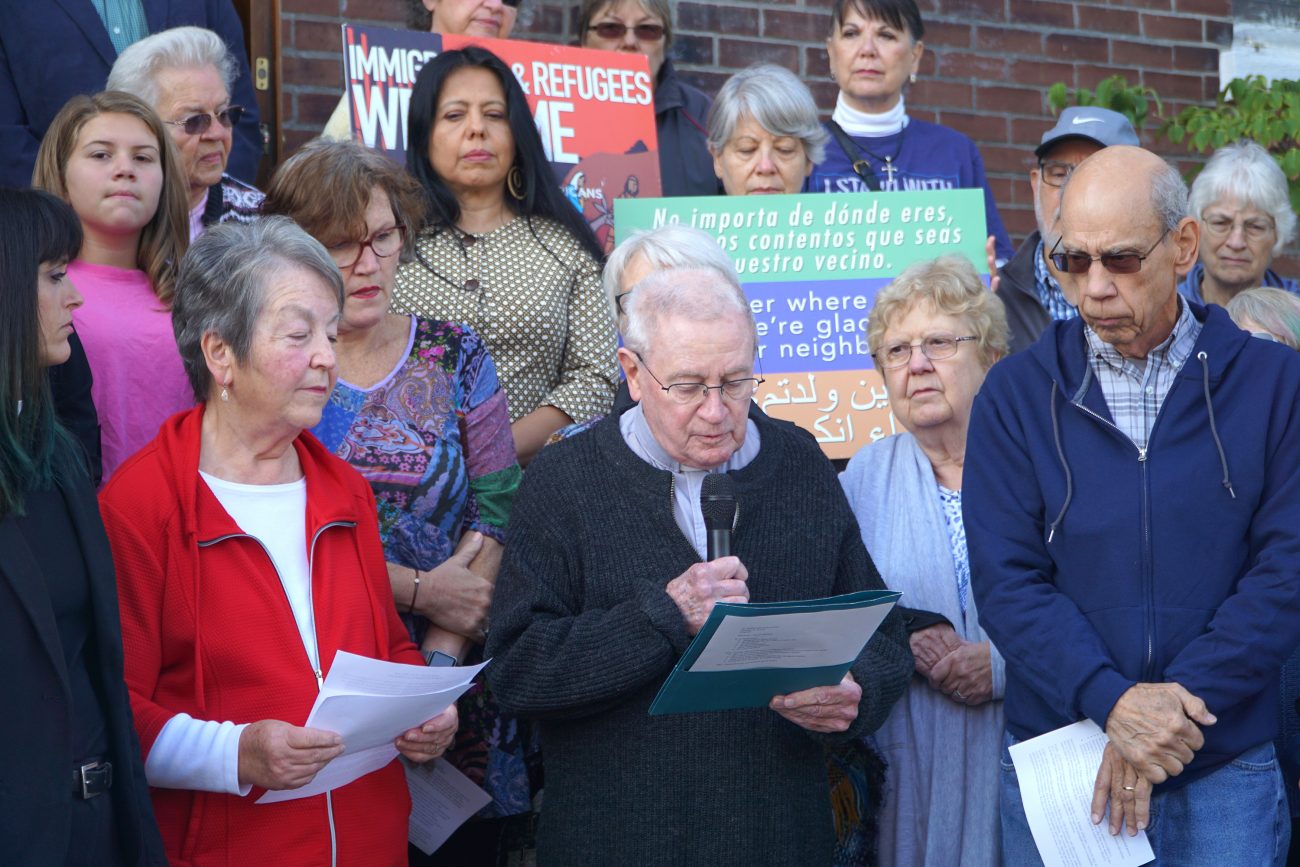 Father Jim Flynn, a retired priest of the Archdiocese of Louisville, Ky., reads a portion of a statement Oct. 8, 2019, at St. William Church that reaffirmed the parish’s commitment as a sanctuary church. (CNS photo/Jessica Able, The Record)

LOUISVILLE, Ky. (CNS) — St. William Church in Louisville reaffirmed its status as a sanctuary parish at a news conference on the steps of the church Oct. 8.

Leaders of the parish, including parish administrator Sharan Benton, issued a public statement declaring its “long-standing commitment as a sanctuary parish.”

While the parish has no plans to house migrants or immigrants, as it did for Central Americans in the 1980s, it will continue to be a voice for those fleeing violence and persecution, its leaders said.

“St. William strives to embody the central principle of Catholic social teaching, which is to uphold the dignity of human persons,” said Dawn Dones, pastoral associate at St. William.

In the 1980s, St. William and a number of other area churches housed Central American refugees who were fleeing oppressive governments in their countries.

“In 2019, our commitment to sanctuary looks different. We are no longer equipped to house persons in the building adjacent to the church which is now a youth retreat center.

“Our sanctuary declaration is instead a public rejection of the brutal and racist policies of the present administration, and a commitment to support the leadership of immigrant-led groups who work diligently to establish justice for all,” Dones said.

Archbishop Joseph E. Kurtz of Louisville in a statement said that much of St. William’s plan corresponds “to the priorities of our local church and long-standing efforts by the U.S. Conference of Catholic Bishops. The U.S. bishops have issued numerous statements on these issues, most recently expressing serious concern about the limits placed on refugees admitted to the United States.”

As the church in the U.S. recognizes October as Respect Life Month, Archbishop Kurtz called upon all 110 parishes in the Archdiocese of Louisville “to share the call of Catholic social teaching to respect the dignity of every human person, especially the vulnerable persons seeking a better life and fleeing violence and persecution.”

“Along with the bishops of the United States, I have long advocated for comprehensive immigration reform that protects families, provides a path to citizenship, and addresses the root causes of immigration while also respecting the right of nations to protect their borders,” said the archbishop, who is being treated for cancer in North Carolina.

Leaders of St. William called for the immediate closure of detention centers at the southern border, reunification of families, honoring the right of asylum for those seek safety in the U.S., comprehensive immigration reform and structural economic reforms that address the root causes of poverty that push people to migrate.

St. William leaders also said the parish will partner with the Interfaith Coalition of Immigrant Justice and others to “explore a sanctuary network.”

“This might involve a number of congregations committed to offer short-term shelter (a few days at most) to persons in emergency situations,” said Shannon Queenan, a parishioner of St. William.

The parish has hung a permanent banner on the front facade of St. William that says, “Sanctuary for all.”

Members of local faith traditions, including the Episcopal Diocese of Kentucky and Highland Baptist Church, as well as the Interfaith Coalition for Immigrant Justice and La Casita Center also spoke in support of St. William’s commitment to sanctuary.

PREVIOUS: IDs give parishioners way to say, ‘I belong,’ regardless of legal status